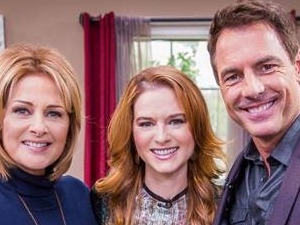 Soaps.com has premiere dates for the week of March 3, as well as episode teasers, casting, a bourbon named after an iconic character, an ABC special, a new witchy series and more in our latest Primetime Dish column…

Arrow:
On March 5 at 8:00 PM the CW will air the episode titled “The Promise.” Wednesday episode teasers: Oliver feels Slade’s presence in Starling City. Back on the island, Sara tells Oliver he needs to kill Ivo to prevent revealing what happened with Shado. Oliver feels immense guilt over the situation but agrees to kill Ivo and the battle begins.

Bad Teacher:
The new CBS series based off the film will premiere on Thursday April 24 at 9:30 PM.

Beauty And The Beast:
In the CW’s new Monday March 3 9:00 PM episode titled “Catch Me If You Can,” it’s anyone’s guess who will win Cat’s heart. Watch the promo video for a few hints.

Being Human:
Canceled. The Syfy channel announced on Tuesday that the series’ season four will be its last. Tune in Mondays at 9:00 PM as the final season plays out.

Cougar Town:
In TBS’ March 4 10:00 PM episode titled “Too Much Ain’t Enough,” Jules enlists Andy to be her business partner in a get-rich-quick scheme after receiving a large commission check. Grayson tries to appear cool in front of Travis’ hipster friends, and Bobby has a hard time feeling comfortable with his new bag.

In other news… Southfork Bottling Company and Warner Bros. are teaming up to launch a 4-year-old, 80-proof light amber-colored brand of bourbon inspired by the series’ legendary Texas tycoon. At the end of March fans and bourbon connoisseurs alike will be able to find J.R. Ewing Bourbon at various spirit retailers initially in fourteen states across the South and Midwest, with national availability expected a few months after and internationally by year’s end.

Glee:
Visit our Glee Spoilers to find out what Tina, Blaine and Sam do before graduation pulls them apart in FOX’s Tuesday March 4 8:00 PM episode titled “Trio.”

Grey’s Anatomy:
Read our Grey’s Anatomy Spoilers to hear who asks the residents for help in ABC’s Thursday March 6 9:00 PM episode titled “You Got To Hide Your Love Away.”

In other news… Sarah Drew (April) will appear on Hallmark Channel’s “Home & Family” on Thursday February 27 at 10:00 AM. She’ll talk about the new season of “Grey’s” and her favorite guest star from last season, which was her father. Please check your local listings. Also look for Drew in the May 9 release “Mom’s Night Out” with Patricia Heaton.

Heroes: Reborn:
Fans of the NBC series that went off the air back in February 2010 are in for a real treat. The network has decided to bring the drama back through a thirteen-episode mini-series. Though the new project will air sometime in 2015 keep an eye out for the online web series to come where fans will get their first look at the storylines and characters that will consume them.

Once Upon A Time: Wicked Is Coming:
Special! On Sunday March 9 at 7:00 PM ABC will air a special that will not only bring new viewers up to date but will give current viewers things to anticipate for the exciting midseason return, as well as feature interviews with the cast and executive producers. The series will premiere following the special.

Petals On The Wind:
Flowers In The Attic Sequel! Rose McIver (“Once Upon A Time”) has been cast in Lifetime’s upcoming sequel as an adult Cathy, previously played by Kiernan Shipka. Also, Dylan Bruce (“As The World Turns'” ex-Chris Hughes, “Orphan Black”) will return as Bart Winslow.

Parenthood:
The NBC series will welcome back Sarah Ramos as Haddie Braverman sometime this season. The actress last appeared in December 2012 and created the role in 2010. Tune in Thursdays at 10:00 PM.

Reign:
In the CW's Thursday March 6 9:00 PM episode titled "The Consummation," Mary must consider both her heart and her nation with a forced marriage on the horizon. Mary's mother visits the castle with an agenda, which worries King Henry and Queen Catherine.

Revenge:
Read Soaps.com's Revenge Spoilers to find out who Victoria confronts when the ABC series returns at 10:00 PM on Sunday March 9 with the episode titled "Payback."

Star-Crossed:
It's arrival day in the CW's March 3 8:00 PM episode titled "Our Toil Shall Strive To Mend." Monday episode teasers: The town prepares a memorial for the fallen soldiers. A small group of human teenagers see what it's like to be an Atrian for a day, as Emery films the interactions. Roman objects to Emery going inside the sector. Sophia looks forward to showing everyone around their pod, but Teri and Drake plan to have a little fun at the humans' expense. Drake is surprised by who's behind his abduction, and Roman is confronted with Julia's suspicions about cyper. This episode will repeat on Friday March 7 at 9:00 PM.

Supernatural:
On March 4 at 9:00 PM the CW will air a new episode titled "#Thinman." Tuesday episode teasers: The last selfie of a murdered teenage girl reveals a ghostly figure in the background. Dean and Sam travel to Washington in search of the ghost, and the girl's mother talks about cold spots, fritzing and the 'supernaturalists' who called earlier.

The Crazy Ones:
Jonathan Del Arco ("Major Crimes") has landed what could turn out to be a recurring gig as Timothy, Gordon's (Brad Garrett) husband, and should start appearing in April. Also, find out more about "Y&R's" (Nikki Newman) Melody Thomas Scott's The Crazy Ones role.

The Good Witch:
The Hallmark Channel will be bringing viewers a ten-episode original series based off the movies. Look for Catherine Bell to head the series as Cassie Nightingale sometime in 2015. But that's not all… A seventh film "The Good Witch's Wonder" will premiere on October 25 to lead into the following year's anticipated special.

The Mindy Project:
Veteran actor Tim Daly ("The Daly Show," "Private Practice") will appear this season on the FOX series. As of yet, details are being kept under wraps. New episodes return Tuesday April 1.

The Originals:
On Tuesday March 4 at 8:00 PM the CW will air a new episode titled "Le Grand Guignol." Read The Original Spoilers to find out who Elijah asks for help, who Klaus opens up to and more!

The Tomorrow People:
In the CW's Wednesday March 5 9:00 PM episode titled "Enemy Of My Enemy," Julian is forced to make a deal that could cost his and Stephen's lives. John disobeys Cara's orders, and Astrid turns to John for comfort after being plagued by nightmares.

Two And A Half Men:
As a reminder, the CBS series now airs at 9:00 PM each Thursday.

Unforgettable:
The series returns to CBS with new episodes beginning on Friday April 4 at 8:00 PM.