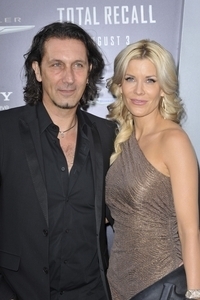 In this month’s column, Soaps.com has some details surrounding the careers of former soap stars of Daytime cancelled soaps “All My Children,” “Another World,” “As The World Turns,” “Guiding Light” “Loving,” “One Life To Live,” “Passions” and “Santa Barbara.” Read to learn who will be appearing in upcoming films, who got married, engaged and broke up, who wrote a self-help book, a sad passing, another lawsuit and more in this month’s after-Daytime column.

McKenzie Westmore and Patrick Tatopoulos engaged.
The relationship status has changed on McKenzie Westmore’s (“All My Children’s” ex-Dr. Riley Sinclair, “Passions'” ex-Sheridan Crane) Facebook page. The update shows the actress is now engaged to her boyfriend, production designer/director Patrick Tatopoulos. We wish the couple (pictured above) our very best, and for fans who miss seeing the actress on television tune in to the Syfy Channel Tuesdays at 9:00 PM to watch “Face Off,” where Westmore has been a host since 2011.

Eva LaRue’s husband files for divorce.
TMZ is reporting that former “All My Children” actress Eva LaRue (ex-Dr. Maria Santos Grey, 1993 to 2011) is splitting from her husband of almost four years. Joseph Cappuccio allegedly filed documents asking the judge to also consider rejecting any requests made by LaRue for spousal support.

Michael Park guests stars on House Of Cards.
Daytime fans will always remember Michael Park for his thirteen year run as "As The World Turns'" Jack Snyder. The actor recently appeared in "The Sound Of Music Live" and will make another appearance next month. Those who have Netflix will be able to see Park in the Friday February 14 season two premiere episode of the American political drama "House Of Cards." As of yet, there are no details on who Park will play.

Ashley Williams to co-star in CBS pilot.
One of Ashley Williams' first acting gigs was playing Dani Andropoulos on "As The World Turns" from 1995 to 2001. Since then the actress has appeared in numerous Primetime and film roles, including a six-year run on CBS's "How I Met Your Mother." Once again partnering with CBS, Williams will star opposite Jim Gaffigan ("Bob's Burgers") in his upcoming unnamed comedy pilot, which is based on his life. Watch for Williams to play Jim's wife Jeannie.

Jake Weary guest stars on Chicago Fire.
Jake Weary, who stepped in to play the role of Luke Snyder on "As The World Turns" in 2005, made his way back to Primetime this month. Weary turned up as Vince Keeler on NBC's "Chicago Fire" on January 21 and 28. Keep on the lookout for the third appearance of his three-episode arc. The series airs Tuesdays at 10:00 PM.

Look out for Jake Weary on a three episode arc on Chicago Fire starting sometime in Jan. 2014

Bonnie Dennison lands lead in untitled FOX pilot.
Bonnie Dennison, who played "Guiding Light's" Daisy Lewis from 2007 to 2009, has been cast in a lead role in an upcoming FOX comedy pilot. Deadline is reporting that the former soap star will play a college sophomore named Thena, as the plot surrounds a women's college that for the first time in history starts to accept male students. Her character is described as a hard-core, pretty, yet uptight feminist, who is against men enrolling in the college. Viewers will also see Thena's romantic side surface when least expected. Stay tuned for future details as they are released.

Justin Klosky writes self-help book.
Justin Klosky, who played "Guiding Light's" Joey Lupo from 2003 to 2006, released a new book back on December 26 titled Organize & Create Discipline. After the actor was diagnosed with OCD (Obsessive-Compulsive Disorder) he found ways to tap the benefits of his condition and runs a firm, which helps high-end clients, such as Bryce Dallas Howard ("Twilight Saga: Breaking Dawn 2"), Julie Chen ("The Talk") and Saks Fifth Avenue, take control of their lives. Klosky's new book gives organization methods, arranged in categories from A to Z, from laundry to utility closets, and is available in bookstores and on various online venues.

#organizecreatediscipline is on @CBSLA #KCAL9 soon. Who has started to read the #ocdexp book?! Find out more... pic.twitter.com/kXJ3EpMFLq

Luke Perry in The Beat Beneath My Feet.
Longtime fans of Luke Perry will remember him way before his "90210" days when he played Kenny on "Another World" and Ned Bates on "Loving." Now the actor will play Steve in the upcoming film "The Beat Beneath My Feet." When a teenage boy uncovers that his rowdy neighbor is really a disgraced Rock God (Perry) who owed a ton of unpaid taxes 'before his death' eight years ago, he agrees to keep his secret if he teaches him all he knows about the arts of Rock Guitar. Stay tuned for the film in 2014.

Sam Hall sues ABC over lack of One Life To Live royalties.
Sam Hall, who was a head writer for "One Life To Live" in the 1980s, has filed a lawsuit against ABC. The lawsuit was submitted on Tuesday January 7 in New York State Court, alleging he hadn't received weekly paid royalties for the airings of the soap opera on iTunes, Hulu and other venues. The royalties apparently stopped on January 13, 2012 when the soap was canceled on ABC, but Hall believes his contract entitles him to royalties from the online Prospect Park soap as well.

Crystal Hunt charged with felony assault.
Back in December Soaps.com reported on former "One Life To Live" actress (ex-Stacy Morasco) Crystal Hunt's bar fight. TMZ now reports that Hunt has been officially charged with a felony assault with a deadly weapon. The L.A. County D.A. felt as though the bar glass used in the altercation was a deadly weapon. Though Hunt stated that she acted in self-defense, if charged she could face up to four years in prison.

Ryan McPartlin in Hallmark's Chance At Romance.
"Passions'" alum Ryan McPartlin (ex-Hank Bennett) recently turned up in the CW's "Hart Of Dixie" and can be seen next month on the Hallmark Channel. McPartlin will star alongside Erin Krakow ("When Calls The Heart") in the premiere of "Chance At Romance." Tune in Saturday February 8 at 7:00 PM as one woman begins the journey to finding love as a result of a twelve year old's manipulations. Watch the official trailer below.

Carmen Zapata passes away at 86.
Fans of the now defunct soap opera "Santa Barbara" will remember Carmen Zapata for her role as Cruz's (A Martinez) mother Carmen Castillo from 1985 to 1991. On Sunday January 5 Zapata passed away, reportedly from a heart condition, at the age of 86 in her home in Van Nuys, California. Aside from her Daytime role, Zapata appeared in numerous Primetime and film roles including "Falcon Crest," "Trapper John M.D." and "Dr. Quinn, Medicine Woman," as well as on Broadway. Soaps.com sends the actress' family and friends our deepest condolences.

Robin Wright engaged.
Robin Wright, who played "Santa Barbara's" Kelly Capwell from 1984 to 1988, accepted a marriage proposal from her boyfriend Ben Foster ("Six Feet Under"). The couple (pictured above) has been dating for two years. Wright was previously married to Sean Penn ("Gangster Squad") and former "Santa Barbara" alum Dane Witherspoon (ex-Joe Perkins). Soaps.com sends the actress our congrats on her engagement, as well as her Golden Globe award for Best Actress in a Television Series ("House Of Cards," Claire Underwood).

Get the details for "All My Children" alum (ex-Erica Kane) Susan Lucci's Hot In Cleveland return and read which soap stars were nominated for a NAACP Image Award.