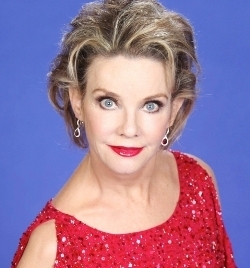 The soap stars have been busy with life outside of Genoa City, LA, Port Charles, and Salem, taking on side projects, having babies, and keeping everyone informed on Twitter. Get caught up on it all each week in Soaps.com’s regularly updated soap opera news rooms.

The Bold And The Beautiful:
Darin Brooks showed up in Primetime. And it was the early 90s in LA, and Zach caused a lot of trouble for Felicia Forrester. Do you remember who his father was? Vote about it in our Thursday Throwback Poll. Then read Candace’s weekly blog, “B&B” Breakdown, for her thoughts about what could possibly be happening between Katie and Ridge in Soaps.com’s The Bold And The Beautiful News Room.

Days of our Lives:
See who is tweeting in Salem, who suffered a facial injury, and who made a rap video. Then go back to 1999 for our Throwback Thursday Poll when Nicholas Alamain entered into an affair with Kate Roberts. Vote about what made him leave town in Soaps.com’s Days of our Lives News Room. And Christine is back! See if you agree with what she has to say about Nu-Will’s arrival and Abigail and EJ getting freaky in her blog, Deconstructing “DOOL.”

General Hospital:
An actress who played one recently-departed Port Charles resident had a baby while another announced a baby on the way. And rumors that a television icon may be coming to town swirled as photos of another visiting VIP surfaced. Then, vote in our Throwback Thursday Poll about the time in 1998 when Virginia arrived in town during a major event in Carly’s life. Do you remember what it was? And see if you agree with what Vi had to say about Felix’s inability to keep a secret in her weekly “GH” Rundown, all in the General Hospital News Room.

The Young And The Restless:
More information was revealed about Michael Muhney’s exit. A Port Charles transplant began taping scenes in Genoa City. A current diva explored directing while another appeared on the cover of a new online magazine. A fan favorite showed part of his cult childhood in a documentary. And a reality television star is coming to town. Go back to the early 80s when Jill Foster decided a life with Andy Richards wasn’t what she wanted, and vote in our Throwback Thursday Poll. Then read Candace’s weekly Restless Rant to see if you feel the same about the tension loose cannon Kelly brings to the canvas in The Young And The Restless News Room.