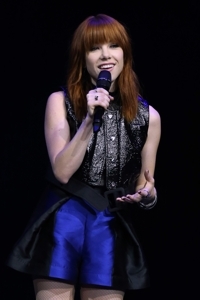 This week, find out how Kanye West and Kim Kardashian made news at the end of 2013, how Justin Bieber’s latest film is doing, what Lindsay Lohan’s been studying, which celebrities closed out the year by getting married and much more.

Carly Rae Jepsen on Broadway.
Grammy-nominated singer Carly Rae Jepsen will make her Broadway debut in “Rodgers & Hammerstein’s Cinderella,” according to The Hollywood Reporter. Jepsen will appear in the lead role for three months beginning February 4. Fran Drescher (“The Nanny”) also joins the production at that time in the role of Cinderella’s stepmother.

Aiden Turner charged with domestic violence.
Ex-“All My Children’s” Aiden Turner, who was previously arrested for felony assault, has now been charged with four counts of domestic violence in relation to an incident involving his girlfriend, according to TMZ. Turner allegedly threw a remote control at the woman, which resulted in a cut and bruising, and also is accused of hurting her shoulder. After leaving “AMC,” Turner did a stint on Dancing With The Stars.

Miley Cyrus dating Kellan Lutz.
E! News confirmed that pop star Miley Cyrus (“Hannah Montana”) is dating actor Kellan Lutz (“The Legend of Hercules,” “Twilight”). The pair was spotted together in Miami earlier in December, and then partying and making-out at Beacher’s Madhouse in Las Vegas on the weekend of December 28.

Prince William heading back to school.
England’s Prince William already has a degree in art history, and now he will return to university to gain knowledge in an entirely different field. The prince has enrolled in a 10-week program in agricultural management at the University of Cambridge, according to People. He will attend classes from January to until mid-March.

Chelsea Handler suffers ski injury.
Comedienne Chelsea Handler (“Chelsea Lately”) took to Twitter to share her misfortune on the ski hills on December 29. It seems she tore a muscle on the slopes. Her tweet included a photo:

Another day of skiing, and whoopsie. I come home now pic.twitter.com/umPVR3QFiq

A&E reinstates Duck Dynasty’s Phil Robertson.
Controversial patriarch, Phil Robertson, had his suspension from “Duck Dynasty” lifted just over a week after being removed from taping due to anti-gay and racist remarks made in an interview with GQ. A&E issued a statement as follows, “After discussions with the Robertson family, as well as consulting with numerous advocacy groups, A&E has decided to resume filming ‘Duck Dynasty’ later this spring with the entire Robertson family.” The network maintained that it does not share Robertson’s views, and plans to air public service announcements promoting ‘unity, tolerance and acceptance among all people’. Directly following the reinstatement, a video from 2009 surfaced in which Robertson promoted the idea of marrying girls when they are 15 or 16 years-old.

Kaley Cuoco is married.
Actress Kaley Cuoco (“The Big Bang Theory,” “8 Simple Rules”) broke the news on Instagram on January 1 that she had married her fiance, Ryan Sweeting. The photo shows the couple kissing with Cuoco in a pink gown. The pair had only dated for three months at the time of their engagement in September.

Justin Bieber’s box-office woes.
Pop star Justin Bieber’s troubled year may have had an impact on his showing at the box-office as The Independent reported that his latest film, “Believe,” only brought in $3.1 million in its first day of release in the United States, and just $4.5 million after five days in theaters. Bieber’s previous movie, “Never Say Never,” raked in $29.5 million on its opening day back in 2011, and grossed $73 million, which earned it the honor of being the most successful concert film in history. Open Road Films pointed out that the current movie is being screened in less than half as many theaters as the previous film.

Patrick Swayze's widow is engaged.
Lisa Niemi, who was widowed when her beloved husband Patrick Swayze ("Dirty Dancing," "Ghost") passed away in 2009, is engaged to a jeweler named Albert DePrisco. People reported that the pair had been dating for one and a half years, and DePrisco popped the question on New Year's Eve.

Michael Schumacher in coma following ski accident.
Retired seven-time Formula 1 champion driver Michael Schumacher, who racked up the most wins in F1 history, remains in a medically-induced coma in the hospital after he fell while skiing off-piste (an unmarked slope) in the French Alps on Sunday December 29. Schumacher has undergone two surgeries for head trauma and remains in critical, but stable, condition, with doctors refusing to commit to a prognosis.

Lindsay Lohan gets DJ tips.
Lindsay Lohan ("Mean Girls," "The Parent Trap") spent a couple of hours in the DJ booth studying the talents of Diplo and Major Lazer at New York's Pier 94 the night of Monday December 30. TMZ reported that Lohan's planned musical comeback revolves around electronic dance music. Lohan shared a Twitter post with a link to a photo showing her view from the booth that night:

Anna Paquin's role dropped from X-Men film.
Making waves in the movie world is the news that actress Anna Paquin's ("True Blood," "The Piano") character, Rogue, has been cut from the upcoming sequel, "X-Men: Days Of Future Past." Director Brian Singer confirmed to Entertainment Weekly that a rescue sequence was cut, which was the only part of the film Paquin appeared in, effectively eliminating her from the final product. He stressed that the decision had nothing to do with the actress, and that she took the news like a professional. Singer added that the cut sequence would likely be on the DVD as part of the bonus material.

Christy Carlson Romano gets married in Canadian castle.
Actress Christy Carlson Romano, who rose to fame playing older sister, Ren, in Disney's "Even Stevens," ended the year by marrying her longtime boyfriend, Brendan Rooney. The pair wed at Fairmont Banff Springs in Alberta, Canada - their castle in the mountains. According to US Weekly, Carlson Romano, who also voiced the popular "Kim Possible" cartoon character, met Rooney in February of 2011 while studying at Columbia University, where she is currently completing her degree.

Dwayne Wade fathered child before proposing to Gabrielle Union.
Last week, Gabrielle Union announced her engagement to NBA player, Dwayne Wade, and this week on December 30, Wade acknowledged that he was the father of a newborn boy born about a month ago who he had fathered with another woman while he and Union were apart. "Entertainment Tonight" reported that Wade and Union had already worked through the issue as a couple prior to their engagement.

Kanye West to give up ranting?
Outspoken rapper Kanye West stunned fans and media in Toronto, the final stop of his North American tour, on Monday December 30, by announcing plans to take a break from ranting, potentially for up to six months. In related news, West's fiancee, Kim Kardashian ("Keeping Up With The Kardashians") decided to usher out 2013 by sharing a 5-minute video montage of the 'Kimye' romance. Check it out through her Twitter post:

Vote on the best and worst of Daytime drama through Soaps.com's Soap Opera Year In Review. Read our Primetime Dish to find out when to see the Cougar Town season premiere and much more.