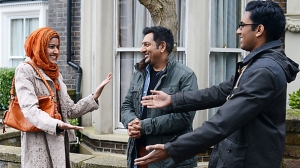 Kylie plans for her future on “Coronation Street.” Linda has to control herself after discovering a secret on “EastEnders.” After Declan gives Dom the boot, Vanessa gives him a hand on “Emmerdale.” And Carmel is shocked on “Hollyoaks.”

Coronation Street:
Spoiler alert: Feeling guilty about what has happened, Peter wishes Tina would stick around. That might be complicated now that she’s had a better look at what he’s really like. As she gives him an ultimatum that would force him to make a choice fast, Carla starts to act on her suspicions. After questioning Liz, she confronts Peter and he does his best to lie his way out of trouble. Meanwhile, Michelle puts on a few pounds. Is this just from the holidays or is she pregnant? She decides to test Steve on how he would react to the latter.

Fiz and Tyrone continue trying to keep Hayley in high spirits as her condition worsens. Roy scores some points with his strawberries, but their happy moments are fraught with anxiety. He remains determined to fulfill all of her requests, although this leads to some curious adventures. And Tony continues getting closer to the Grimshaws again, but is Jason really willing to give his father another shot?

EastEnders:
Spoiler alert: Ian is feeling bad about his past. Sharon gets him to open up about it, but it may take the whole Beale family to actually make him feel better. A party gets underway. Ian obviously isn’t thrilled by it and this gnaws away at Denise. She’s already feeling bad with all of the guilt she’s been carrying and looks for a way to make things right.

Shirley, Tina and Linda start to battle over control of Johnny. He’s furious when he catches people leering at his mother. Whitney tries to teach him how to keep a cool head but that could be easier said than done. Meanwhile, Max tries to cut Kirsty out of his life but she is not easy to be rid of. After she has a frank discussion with Shirley, Kirsty decides to take drastic measures to get what she wants.

Emmerdale:
Spoiler alert: Val is shaken after receiving some shocking news from an old lover. This makes her act so erratic that Diane starts to think that Val is having an affair. Even Pollard starts to get suspicious. Across the village, Kerry spills about Ruby being pregnant. Her family overwhelms her with support, but she's soon devastated by news about the baby. And Priya continues to refuse Jai's help with her baby.

After Rachel and Sam are forced to tell Lisa the truth, Charity puts some more dread into Sam's life. She urges him to try and escape while he still can. While Rachel is amazed by how supportive her family is actually being, Alicia decides it's time for her to throw some support behind Leyla. However, this does not go as planned. When they meet up, they wind up being nabbed in a police raid. Finally Alicia heads home with someone surprising.

Hollyoaks:
Spoiler alert: When Theresa seems to be getting out of control, Carmel decides it is time to take some radical measures. She calls Sonny Valentine back to the village to make sure that Kathleen will be kept out of Theresa's life. But Carmel realizes she may have made a big mistake when it is revealed that Sonny is now a cop. Mercedes tells Theresa to run before she can be exposed for killing Sonny's brother. They head for the airport but may not escape in time.

Theresa's not the only one whose life has fallen apart lately. Take a look behind the scenes at Sienna's recent fall from grace in this "Hollyoaks" video.

Neighbours:
Spoiler alert: This year's "Neighbours" season finale aired on December 6. It will be back in the new year but you can get a sneak peek at what's ahead for the people of Erinsborough in the video below.

Review the past twelve months of Daytime drama in Soaps.com's Soap Opera Year In Review.
And then learn who Courtney had a secret meeting with on Y&R.