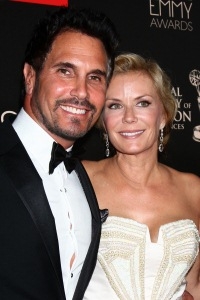 And a Happy New Year!

This week there will be drama interspersed with celebrations and new decisions to be considered by a few. Don’t miss updates on show preemptions for New Year’s Eve and New Year’s Day.

Days of our Lives:
Kate may have designs on revenge in Salem this winter, Sami demands to know all that EJ’s known about Kristen, and Jenn catches on that JJ is being manipulative. The Days of our Lives Spoilers tell us many are worried over someone’s knowledge of a secret.

General Hospital:
Both Patrick and Robin are faced with new choices, new information leaves someone in despair in Port Charles, and Sonny confronts a shooter involved in the warehouse incident. Soaps.com’s General Hospital Spoilers indicate that someone hasn’t given up in trying to win the affections of another.

The Young And The Restless:
A shocking evening is in store for Billy, Nick and Sharon find themselves growing closer, and Kevin’s worried over Chloe’s connection to Connor. Visit The Young and The Restless Spoilers and learn who’s troubled in Genoa City by evidence implicating Adam.

Love Island's Leslie Offers Update on Her Mysterious Off-Camera Departure: 'What I Did Was a Little Illegal'