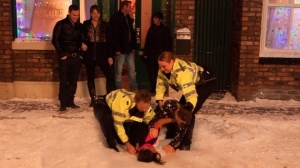 The Carters settle in. (BBC)

Roy has sad news about Hayley on “Coronation Street.” Kat waits for critical news on “EastEnders.” Rachel’s confession enrages Lisa on “Emmerdale.” And Theresa plots her revenge on “Hollyoaks.”

Coronation Street:
Spoiler alert: While Carla continues to refuse to give up on Peter, she’s hardly the only one. Tina manages to get his goat by encouraging his jealousy. When they get into a heated argument about it, Roy nearly catches them. Liz winds up being the one to remind the recently married man to step back and stay away from Tina. However, the barmaid does not appreciate Liz sticking her oar in and blows up at her. After a harsh lecture from Liz, Tina has a choice to make.

As Kal pushes Nick to regain control over his body, Leanne decides it’s time for her to take her old life back. She wants to move back in with Nick, which doesn’t sit well with everyone. Meanwhile, Kylie continues to misbehave and upset Max and Lily’s lives. Seeing how bad she is making things for her children forces her to realize it could be time to put what’s happened behind her. Down the street, Eileen’s house gets even more crowded when Tony shows up on her doorstep looking for Jason.

Philip Lowrie will be leaving Weatherfield and the role of Dennis Tanner behind in the summer of 2014. Lowrie originally played the role from 1960-68 before returning in 2011. A spokesperson for the show said the door will be left open for the actor to return in the future.

EastEnders:
Spoiler alert: To protect her sister, Ronnie recruits Phil to help her get Carl out of Walford, and their lives, permanently. But her plan soon goes off the deep end. She invites Carl over and offers him five thousand pounds to get lost. That doesn’t go over well and she winds up clobbering him. This only makes it worse. Things eventually escalate to a full-on hostage taking.

Mick acts off-kilter after he’s sent an unanticipated invitation. He does his best to keep this quiet as he ponders how to respond. Everything else around the Vic is also thrown out of whack. Mick and Linda argue while Nancy struggles with her big day. The tension spreads to the customers and the atmosphere hits a boiling point when Nancy blurts out something the Carters do not want to hear.

Emmerdale:
Spoiler alert: Finn finds himself in a new job and not one that he was expecting. This is not a pleasant surprise, however, and he quickly tries to get himself fired. Meanwhile, Declan realizes that working with Charity is more dangerous than he'd imagined. Their plans are thrown off balance after he notices that her drive for revenge could easily backfire. When the police come sniffing around, rather than retreat, Charity decides to escalate her scheme while Robbie attempts to force a confession out of Declan.

Moira is expecting a big proposal but things do not turn out as she'd hoped. She winds up with an injury and this leads to Cain showing off how jealous he can get. Across the village, Ali and Ruby actually have good news. They want to keep it to themselves but that's not likely to happen. Their secret isn't the only one getting out. Kerry blabs about Priya's pregnancy and Bernice tips Sam off about something which unnerves him. When he tries to head things off before they can get out of control, he ends up in trouble with the police.

Hollyoaks:
Spoiler alert: Tony and Diane have to face Finn when he wants to see his daughter. John Paul starts to worry that Finn may be landing himself in trouble. Pretty soon, Robbie is getting in the middle of things too, much to the annoyance of Diane, who was already miffed to begin with. Meanwhile, Jason's suspicions of Sinead grow thanks to her ongoing secretive activity. And Esther decides it's time to make a hard choice that could break someone's heart.

While Ruby looks for someone to help hide her loneliness, Ziggy remains desperate to get back the person he loves. Desperation leads to disaster when he winds up getting an eyeful of something he definitely did not want to see. And speaking of unpleasant surprises... Dodger receives a nasty email, but somehow he still manages to be optimistic about what's coming ahead.

Get into the mood of the season with this special holiday video from the cast of "Hollyoaks."

Neighbours:
Spoiler alert: This year's "Neighbours" season finale aired on December 6. It will be back in the new year.

Be sure to stay updated on when your favorite show will be airing over the holidays with Soaps.com's 2013 Soap Opera Christmas Pre-Emptions. And then learn how Brooke welcomed Ridge back on B&B.