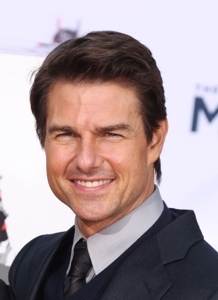 Tom Cruise settles defamation suit.
TMZ reported that Tom Cruise (“Mission Impossible,” “Top Gun”) settled his lawsuit against In Touch and Life & Style magazines. Cruise sued the publications in relation to comments printed about his relationship with his daughter Suri, which he considered libelous. A joint statement was issued: “Bauer Publishing, as well as In Touch and Life & Style magazines, never intended to communicate that Tom Cruise had cut off all ties and abandoned his daughter, Suri, and regret if anyone drew that inference from anything they published.”

Duck Dynasty over?
In the wake of last week’s Duck Dynasty controversy, which involved Phil Robertson being indefinitely removed from the popular reality show after expressing anti-gay views in an interview with GQ, the Robertson family came out in support of the patriarch, releasing a statement on their Facebook page as follows, “We have had a successful working relationship with A&E but, as a family, we cannot imagine the show going forward without our patriarch at the helm. We are in discussions with A&E to see what that means for the future of ‘Duck Dynasty’.”

JWOWW is pregnant.
Jenni ‘JWOWW’ Farley and her fiance, Roger Mathews, broke the news that they are expectant parents on Christmas Day. The excited star of “Jersey Shore” and “Snooki & JWOWW” took to Twitter to share the happy news and a link to a photo of Farley’s ultrasound captioned, “We couldn’t have wished for a better gift this Christmas!”

Santa brought Roger and I the best gift of all… http://t.co/7MENFiXxIl ???

Gabrielle Union engaged.
Gabrielle Union (“Bad Boys II,” “Bring It On”) got engaged to Miami Heat basketball star Dwayne Wade recently. She took to Twitter to share the happy news, and included a link to a photo of her ring.

Dot Marie-Jones secretly weds.
“Glee’s” Dot Marie-Jones married her longtime girlfriend Bridgett Casteen in a hush-hush ceremony at their home in Los Angeles on Saturday December 21. People reported that close friends were invited over for a holiday party only to find they were attending a wedding.

Marie Osmond becomes a grandmother.
Marie Osmond (“Marie,” “Donny and Marie”) became a grandmother for the first time when her oldest son Stephen and his wife Claire welcomed a son into the world on December 19. Osmond excitedly took to Twitter to post the happy news:

Kate Upton and Maksim Chmerkovskiy part ways.
According to People, Dancing With The Stars hunk Maks Chmerkovskiy and Sports Illustrated model Kate Upton have called it quits on their relationship. The pair had been dating since Upton’s birthday in June.

Will Arnett is dating a producer.
Will Arnett (“The Millers,” “Arrested Development”) is dating Hollywood producer Erin David, according to US Weekly. David and Arnett first worked together on “Up All Night.” Among David’s other production credits are “Saturday Night Live,” “Baby Mama,” and “Hot Rod.”

Selena Gomez cancels tour.
A representative for actress/singer Selena Gomez ("Shake It Up," "Monte Carlo") confirmed to People that she has canceled her planned tour of Australia next year because she needs to take time for herself. Gomez has just come off a six-month tour of Europe and the United States.

Robin Wright is engaged.
Actress Robin Wright ("House Of Cards," ex-Kelly, "Santa Barbara"), who was married for 20 years to Sean Penn ("Mystic River," "Milk," "Fast Times At Ridgemont High"), is engaged to marry actor Ben Foster ("3:10 To Yuma," "The Messenger"), according to Life & Style. Foster and Wright met on the set of "Rampart" in 2011.

Amanda Bynes goes back to blonde.
On a December 22 shopping trip in Los Angeles with her parents, a post-rehab Amanda Bynes was noted by media to be looking healthy. Notably, Bynes was sporting a very nice honey-blonde hairstyle quite unlike the disheveled platinum blonde wig she wore in some photos prior to receiving psychiatric treatment.

Lindsay Lohan making a music comeback?
On the heels of the news that Lindsay Lohan ("Freaky Friday," "Mean Girls") has been fielding book offers, comes the news that she has a recording label interested in helping her make a music comeback. TMZ reported that SMH Records has offered her a deal and this was confirmed to them by the company's founding partner, Jonathon Hay. Lohan posted a link on Twitter that shows her in a music studio.

Jared Padalecki welcomes a son.
"Supernatural's" Jared Padalecki and his wife Genevieve Cortese Padalecki had their second child on Sunday December 22. It was another boy for the couple who already has a 21 month-old son, Thomas Colton. Padalecki posted the good news on Twitter:

Check our guide to 2013 soap opera holiday pre-emptions for next week. Read Soaps.com's Primetime Dish to learn about Mark Evan Jackson's guest role on Brooklyn Nine-Nine and much more.