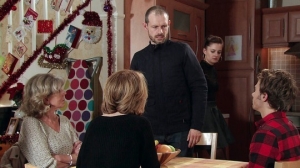 Kat and Alfie bid farewell to the pub. (BBC)

Anna and Owen receive a surprising offer on “Coronation Street.” Peter and Lola plan to unite their families for the holidays on “EastEnders.” It’s a disastrous wedding day for David and Alicia on “Emmerdale.” And when Mercedes gets generous, Grace hates her guts even more on “Hollyoaks.”

Coronation Street:
Spoiler alert: Hayley’s condition continues to deteriorate under the burden of holiday shopping. When she actually admits this to Roy, he feels gravely concerned. He and Hayley try to enjoy their final Christmas together but it isn’t easy when the results from her latest tests loom over their heads. Meanwhile, Sophie pulls her mother over to a soup kitchen to work her way through the holidays while Michelle gets her knickers in a twist as Andrea flirts with Steve.

Furious Kylie spins out of control and winds up ruining the holidays for Max. Leanne tries to calm her down before she makes things worse. That’s a hard thing to accomplish. Nick and Leanne do their best to keep the family from imploding around Christmas festivities until it looks like Kylie is too exhausted to fight anymore. Across the street, Peter continues to feel the pressure as he and Tina do their best to avoid one another.

EastEnders:
Spoiler alert: Alfie and Kat have to bid a sad goodbye to the Queen Vic. They remain uncertain of where to go as the new owners move in. Mick Carter and his family take over the pub but the transition is far from smooth. Once they get it open to the public again, Sharon is shocked to see who has taken over but Linda is pleased.

Janine’s plans fall apart as her dream home slips away. She gets desperate to try and hold onto what she wants and that means taking some drastic measures. With her past coming back to haunt her, she wonders if it’s time for her to leave Walford. Meanwhile, Lauren’s plans also fall apart. Lucky for her, she might be able to pull things back together after Joey makes her an offer. And Carol’s world starts to fall apart after she gets some alarming news.

Timothy West and Annette Badland will be joining the cast of “EastEnders” in the new year. West will play Stan, a retired fishmonger in decline while Badland will play Aunt Babe. Both characters are part of the Carter family.

Emmerdale:
Spoiler alert: Sam's week starts off on a bad note when he shows up to get the money he is owed. He and Rachel team up to seek some revenge on Declan and Megan for their double-dealing. But this plan soon slips out of their control. Megan winds up trapped at Home Farm when the place is swallowed up by fire. Sam worries that this is all his fault and the police seem to think so too.

Declan's week goes from bad to worse. His desperate moves wind up dragging Charity into his latest scheme. She can't stop his bad plans from going into action, but she can get something she wants out of him by bartering over an alibi. As Charity gets busy cleaning up Declan's mess, Paddy makes one of his own when he accidentally ruins Christmas for Arthur.

Hollyoaks:
Spoiler alert: Confusion reigns on "Hollyoaks" as Freddie tries to understand Sandy's behavior and Leela wonders about Tegan's cheque. Meanwhile, Carmel tries to keep her resentment of Theresa quiet and looks for some answers to her problems. She and Theresa attempt to call a truce, but Carmel is soon shocked by Jim's harsh words for her.

Ruby has to try and be honest with her family. She needs to be honest to Ziggy too, but that might not mean telling him what he wants to hear. As she starts opening up about what Frankie did, Sinead is thrown off balance when someone unexpected shows up in the village. She does her best to hide her jealousy but may only be making things worse. After getting desperate, she's left facing an ultimatum from Freddie that could be the final straw for them.

Neighbours:
Spoiler alert: This year's "Neighbours" season finale airs on December 6. It will be back in the new year.

There was a major milestone in Genoa City last week. Find out what it was in Soaps.com's The Young And The Restless newsroom. And then learn how much trouble is caused by Ridge's return on B&B.