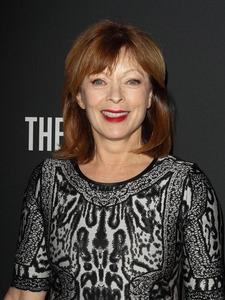 Soaps.com has teasers for the final episode of a CW canceled series for the week of December 23, as well as more episode spoilers, casting, a special “Cougar Town” celebration to include 62,000 wine corks and more in our latest Primetime Dish column…

A.D.:
Sequel! Viewers who enjoyed the mini-series “The Bible” will be excited to hear that NBC has ordered a new twelve-hour follow-up mini-series titled “A.D.,” which will likely air in 2015. Mark Burnett, Roma Downey and Richard Bedser will helm the project as executive producers.

Banshee:
The Cinemax series will return with season two on Friday January 10 at 10:00 PM with ten new episodes.

Castle:
Frances Fisher (“Touch”) will guest star on the ABC series as a fashion tycoon named Matilda King in the January 27 episode.

The moon woke me at 3am: #Castle #FirstDay

Cougar Town:
To celebrate the show’s Tuesday January 7 10:00 PM return illustrator and artist Scott Gundersen will create a 10 x 24 foot mosaic, consisting of almost 62,000 recycled wine bottle corks and will incorporate the various wine-stained hues on the corks to create the shading. The work of art will be created over six days and will be unveiled on December 18 at an all-day “Cougar Size Your Wine” promotion at Chef Gordon Ramsay’s restaurant The Fat Cow at The Grove L.A. at 189 The Grove Drive O-10 in Los Angeles, California. Fans are encouraged to stop by to take photos and post on their social media sites with the hashtag #siphappens. Afterwards, stop into The Fat Cow and shared the online photo with a server and “cougar size” your wine by ordering one of the special “Cougar Town” wines and receive a free wine glass while supplies last. The mosaic will be displayed through Christmas Eve.

“With all the wine consumed during an episode of ‘Cougar Town’, we knew we had to do something with the wine corks,” said Tricia Melton, senior vice president of entertainment marketing and branding for TBS, TNT and Turner Classic Movies (TCM). “This wine-cork mosaic is the perfect way to pay tribute to ‘Cougar Town’ as we prepare to launch its fifth season. We’re especially excited that fans will be able to watch the magic unfold in person as Scott Gundersen creates this one-of-a-kind masterpiece, after which they can join the wine-soaked fun through the ‘Cougar Size Your Wine’ promotion at Chef Gordon Ramsay’s The Fat Cow.”

Getting On:
In HBO's Sunday December 22 10:30 PM episode titled "Nightshift," a new Swedish-speaking patient and several unwelcome inebriated visitors turn DiDi's evening shift upside-down. Dr. James dreams of a Cleveland fresh start. Dawn has an unsettling evening with Patsy and looks for stopgap comforts in the lounge, and an elderly tourist complains about her ruined vacation.

Grey's Anatomy:
Read our Grey's Anatomy Recap: Get Up, Stand Up to find out who put themselves in a dangerous situation during last week's winter finale. Stay tuned for the ABC series' return in February 2014.

Homeland:
TV Line is reporting that Morena Baccarin and Morgan Saylor will be leaving the Showtime series as regulars. Baccarin has played Jessica since 2011, and Saylor has appeared as Dana since 2011. However, both actresses could show up from time to time in guest roles.

How I Met Your Mother:
Ashley Williams, who last appeared on the CBS series in 2012, will return as Victoria in the nineteenth episode of season nine - the final season. Stay tuned for the 2014 air date.

James Gandolfini: Tribute To A Friend:
On Sunday December 22 at 8:30 PM HBO will air the special presentation to honor the late "The Sopranos" star, James Gandolfini (ex-Tony Soprano), who died on June 19. More than two dozen friends and colleagues will come together to remember the actor and reflect on his work through special clips and behind-the-scenes footage.

Nashville:
The very first winner of "American Idol," Kelly Clarkson, will guest-star in the ABC series' episode eleven titled "I'll Keep Climbing" as herself. Tune in on Wednesday January 15 at 10:00 PM.

Nikita:
Final episode. It's all about the final fight in the CW's December 27 9:00 PM series ending finale episode titled "Canceled." Nikita decides to end MDK her way and takes Alex on the road to exact revenge. Jones is forced to reveal the names of the members of MDK. New information takes Nikita down a path that she might never come back from. Michael finds Nikita and attempts to get her to surrender before the military kills her, but ends up making a shocking decision.

Reign:
On Thursday December 26 at 9:00 PM the CW will air a repeat of its October 24 episode titled "Snakes In The Garden."

Revenge:
Read Soaps.com's Revenge Recap: Exodus to learn what went down on Emily's wedding day in the winter finale. Stay tuned after each episode for Soaps.com's recap in January 2014.

The 12 Dogs Of Christmas:
On Tuesday December 24 at 8:00 PM the CW will air the Christmas tale surrounding a girl who, with the help of some spirited canines, teaches people the true meaning of Christmas.

The Carrie Diaries:
On Friday December 27 at 8:00 PM the CW will air a repeat of its October 25 episode titled "Win Some, Lose Some."

The Walking Dead:
Developer Frank Darabont is suing AMC, alleging that the network withheld millions of dollars in profits from him. The New York Post is reporting that documents were filed on Tuesday in the Manhattan Supreme Court. Though Darabont agreed with AMC's decision not to produce the series with an independent studio, and instead to produce it in-house, his lawsuit claims he's lost out on 12.5 percent in profits. The series resumes with season four on February 9.

Read Soaps.com's After The Soap Finales: Where Are They Now for details on soap opera alums Murray Bartlett and Jonathan Groff in HBO's Looking, which premieres on January 14.