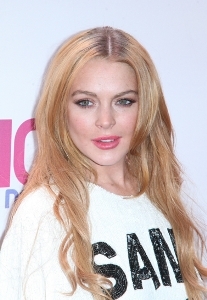 Demi Lovato leaving The X Factor.
Simon Cowell (“The X Factor,” “American Idol”) confirmed on Wednesday December 18 that Demi Lovato (“Princess Protection Program,” “Camp Rock”) would not be returning as a judge on “The X Factor” next season. Lovato plans to go back to touring in support of her music career.

Phil Robertson off Duck Dynasty.
Phil Robertson, father of “Duck Dynasty” star, Willie Robertson, has been removed from the popular show for the time being after he went on an anti-gay rant in an interview with GQ Magazine. A&E issued the following statement: “We are extremely disappointed to have read Phil Robertson’s comments in GQ, which are based on his own personal beliefs and are not reflected in the series ‘Duck Dynasty’. His personal views in no way reflect those of A&E Networks, who have always been strong supporters and champions of the LGBT community. The network has placed Phil under hiatus from filming indefinitely.”

Lindsay Lohan writing memoir?
E! News reported that actress Lindsay Lohan (“Freaky Friday,” “Mean Girls”) is entertaining the idea of writing a tell-all book about her life. Lohan apparently has up to 10 publishers making offers in the seven-figure range. Although Lohan is currently filming her reality series for OWN, Oprah Winfrey (“The Butler,” “The Color Purple”) reportedly isn’t involved in the book project.

Peter O’Toole dead at 81.
Legendary actor Peter O’Toole (“Lawrence Of Arabia,” “Caligula,” “Becket,” “The Lion In Winter”) passed away at the age of 81 on Sunday December 15 in London. The flamboyant actor, known for his hard-partying ways in his heyday, was as acclaimed for his stage performances as his film work. He received eight Oscar nominations throughout his career, and was presented with an honorary Oscar after his seventh nod. O’Toole had retired last year at age 80. “The Young and the Restless'” Eric Braden was among the celebrities who took to Twitter upon hearing the news:

One of my all time favorite actors peter O'Toole, passed away on Saturday in a London hospital! That man was in a series of great films!!

Miley Cyrus to perform live for New Year’s Rockin’ Eve.
From Wrecking Ball to the ball drop in New York’s Times Square. Miley Cyrus (“Hannah Montana”) will finish up a big, albeit controversial year by performing live on “Dick Clark’s New Year’s Rockin’ Eve.” Cyrus will help to ring in 2014 along with other guests including Macklemore, Blondie, Icona Pop, Ryan Lewis, and of course, hosts Ryan Seacrest (“American Idol”) and Jenny McCarthy (“The View”). Check out Cyrus’ tweet below:

“@MileyCyrus: Smilers! There's been a change in my NYE plans. @RyanSeacrest asked me to perform in Times Square for #RockinEve!! ?”

Beyonce’s secret album.
Beyonce stunned the music community and fans on Thursday December 12 by releasing a self-titled studio album directly on iTunes with no promotion whatsoever. She sold 80,000 copies in the first three hours alone and within three days had passed the 800,000 mark, shattering iTunes records. E! News reported that only a handful of insiders and executives at her music label knew of the launch. In related news, Target stores have announced that they will not carry Beyonce’s new album when it becomes available in CD format on Friday December 20. Target spokeswoman, Erica Julkowski, told Billboard, “At Target we focus on offering our guests a wide assortment of physical CDs, and when a new album is available digitally before it is available physically, it impacts demand and sales projections.”

Paul Walker laid to rest.
Following Paul Walker’s tragic death on November 30, “The Fast and the Furious” franchise actor was finally laid to rest on Saturday December 14 after a private family funeral. E! News reported that Walker’s parents, brothers, and other family members attended the gathering, after which Walker was cremated and his remains interred at Forest Lawn Memorial Park in the Hollywood Hills. Another larger memorial is planned at a future date.

Crystal Hunt arrested after bar fight.
Actress Crystal Hunt (ex-Stacy Morasco, “One Life To Live,” ex-Lizzie, “Guiding Light,” “Sydney White”) was arrested the night of Friday December 13 in Los Angeles after she allegedly argued with another girl in a bar and smashed a glass in her face. TMZ reported that the incident took place at Pearl’s Liquor Bar in West Hollywood, and that Hunt’s lawyer told them she was not drinking, and the woman had threatened her. She had apparently tried to have the woman removed from the bar several times without success, and was acting in self-defense.

Jamie Dornan becomes a father.
Irish actor Jamie Dornan, who recently landed the lead role of Christian Grey in “Fifty Shades of Grey,” became a father recently. People confirmed that Dornan’s wife, Amelia Warner, gave birth to a baby girl back at the end of November. Dornan married Warner in April of this year.

Ryan and Trista Sutter renew wedding vows.
"The Bachelorette's" Trista Sutter and hubby Ryan, renewed their vows to celebrate 10 years together on Saturday December 14 in Vail, Colorado, further cementing what has proven to be the most successful love match in the history of "The Bachelor" franchise. The vow renewal will be featured on ABC's special, "The Bachelor: Bachelor Love Stories," which airs on Sunday January 19 at 8:00 PM EST.

Justin Bieber retiring?
Headline-making pop singer Justin Bieber made waves again on Tuesday December 17 when he went on a radio show at Power 106 in Los Angeles and announced he would be retiring after his new studio album drops next week. According to TMZ, Bieber's spokespeople claimed he was merely making a joke.

Kelly Rutherford denied custody of children.
A judge ruled against Kelly Rutherford ("Gossip Girl," "Melrose Place") in her bid to secure custody of her two children, E! News confirmed. Rutherford plans to appeal the decision in the international custody case, in which her ex-husband, Daniel Giersch, has maintained physical custody of Hermes, age 7, and Helena, age 4. As a result of the ruling, the children's father is released from the responsibility of transporting the kids from Monaco where they reside, to the United States for visitation with Rutherford. She will travel to France to pick up her children for a Christmas visit back on American soil.

Kelly LeBrock arrested for DUI.
Actress Kelly LeBrock ("Weird Science," "The Woman In Red") was stopped by the California Highway Patrol and booked for DUI on November 30, according to a report by TMZ. LeBrock, who was once married to Steven Seagal ("Above The Law," "Under Siege"), was allegedly driving erratically and failed to do well on a field sobriety test undertaken by officers. No charges have yet been filed.

Find out who ruins Coronation Street's Max's Christmas and more through Soap Scoop: UK/Australia Edition. Read Soaps.com's Primetime Dish to get the scoop on Ashley Williams' return to How I Met Your Mother.