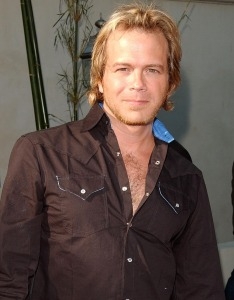 Catching up with the soap actors.

Soaps.com has updates as to what some of the former soap stars of Daytime cancelled soaps “All My Children,” “As The World Turns,” “Guiding Light,” “One Life To Live” and “Passions” have been busy with these days. There are film roles, sad passings, an album release, baby news, an actress gets “Hot In Cleveland,” a Manhattan pad is put on the market and more in this month’s after-Daytime column.

Jonathan Bennett in The Wrong Woman.
Jonathan Bennett, who played “All My Children’s” Adam ‘J. R.’ Chandler Jr. from 2001 to 2002, will star alongside Danica McKellar (“Young Justice,” “The Wonder Years”) in the Lifetime movie premiere “The Wrong Woman.” An updated version of Alfred Hitchcock’s “The Wrong Man,” Ellen Plainview (McKellar) is stunned when she’s arrested for attempted murder, with overwhelming evidence against her. As her friends and family begin to doubt her innocence, due to the victim having been her husband’s mistress, one man (Bennett) believes she’s innocent and offers to help her. Jennifer Aspen (“GCB”), Jim O’Heir (“Parks And Recreation”), Fred Dryer (“Hunter”) and Jaleel White (“Family Matters”) will also appear in the feature, which premieres on Saturday December 28 at 8:00 PM.

Susan Lucci returns to Hot In Cleveland.
Susan Lucci (ex-Erica, “All My Children,” “Devious Maids”) will make her way back to TV Land’s “Hot In Cleveland” as herself sometime during season five. She last appeared as Victoria Chase’s (Wendie Malick) archenemy in February 2012 and will return in a 2014 episode titled “The Undead.”

Eden Riegel gives birth.
Eden Riegel ("All My Children's" ex-Bianca Montgomery, "Y&R's" ex-Heather Stevens) has welcomed a baby boy with her husband Andrew Miller. The actress took to Twitter to share a photo of little Henry Isaac Miller who was born on December 20 at 9:23 AM at 9 lbs. 1oz. The couple shares another son, Jack Oscar. Soaps.com sends the family our very best!

We did it! @FYeahJackMiller, you're a big brother! Henry Isaac Miller born today! 9:23am, 9lbs 1oz. pic.twitter.com/KpooJuxxMG

Tony Musante passes away at 77.
Tony Musante, best known in Daytine for his roles on "As The World Turns" (Joe D'Angelo, 2000 - 2003) and "Loving" (Robert McKenzie Houston, 1993), passed away at age 77 on Tuesday November 26 in Manhattan. The New York Times is reporting that the actor's wife Jane confirmed the cause of death was a hemorrhage, resulting during the recovery from an oral surgery. Soaps.com sends Musante's family and friends our deepest condolences.

Colleen Zenk in Scout.
Former "As The World Turns" actress Colleen Zenk, who played Barbara Ryan from 1978 to 2010, has been added to the cast of Scout, featuring Jane Seymour, as well as Shelley Hennig ("Days of our Lives'" ex-Stephanie). Zenk will appear as Jordan in the film surrounding a rebellious Goth girl's journey to find her little sister while accompanied by a suicidal young man. The actress is also filming "Malcolm And The Fastwalkers."

Wole Parks in Half The Perfect World.
Wole Parks can be remembered in Daytime for his "As The World Turns" role as Dallas Griffin from 2007 to 2008. The actor is currently working on the film "Half The Perfect World" where he'll appear as Ralph. Written and directed by Cynthia Fredette, the storyline focuses around a young divorced hat maker and her boyfriend's brooding cousin. Parks has turned up numerous times in Primetime and most recently played Sam on "Devious Maids" and a Navy Captain on "NCIS."

Martha Byrne's Gotham The Series On-Demand.
Martha Byrne had a short run on "General Hospital" as Andrea Floyd in 2009 but is best known in Daytime for her twenty-three year run as "As The World Turns'" Lily Snyder. In 2009 she co-created the web series Gotham The Series, which is now available On-Demand on Vimeo. Viewers can download the forty-five-minute pilot episode that consists of all thirteen webisodes. Visit Gotham The Series on Vimeo to download the pilot and purchase for $1.99 or rent it for twenty-four hours for $ .99.

Nic Robuck guests on Major Crimes.
Nic Robuck, who played the popular role of "One Life To Live's" James Ford, will be heading back to Primetime. The actor announced that he would be guest starring in episode 17, "Year-End Blowout," of the TNT series "Major Crimes." Tune in to see Robuck on Monday December 30 at 9:00 PM.

The actor also took part in a photo shoot and tweeted:

David and Melissa Fumero celebrate their anniversary.
Former "One Life To Live" co-stars David (ex-Cristian Vega) and Melissa Fumero (ex-Adriana Cramer) recently celebrated their six year wedding anniversary. Melissa took to Twitter to send her husband a special message and posted a photo for fans to enjoy. Soaps.com sends the couple good wishes for many more years to come!

6 yrs ago,I made my best friend sign papers legally binding him 2 me 4 eternity.@davidfumero I ❤️ you like craycray pic.twitter.com/0FG0xTmcm0

Erika Slezak sells Manhattan Co-op.
Are you in the market for a new ritzy place to call home? Erika Slezak, who played "One Life To Live's" Victoria Lord since 1971, has put her Manhattan Co-op on the market. The actress has listed the 50 W. 67th Street apartment with Wendy Sarasohn and Jamie Joseph of the Corcoran Group for 1.825 million dollars. The digs consist of two bedrooms, two baths, a spacious living room with built-ins, a wine refrigerator in the renovated kitchen, a wood burning fireplace and much more! Visit Erika Slezak's 50 W. 67th Street apartment for a closer look at the historical space that is listed in the National Register of Historic Places. Also, view Erika Slezak's Holiday Letter to fans to hear her thoughts on having been able to play Viki once again.

Erin Cardillo's Solstice: A One Act Play Festival.
Former "Passions" actress Erin Cardillo, who played Harmony's Esme Vanderheusen from 2005 to 2008, is reaching out to fans for support of her new project "Solstice: A One Act Play Festival" and stated, "I'm not acting in this one, but I wrote one of the plays. I'm also artistic directing and producing the festival with my husband, Joe Towne, and a wonderful team of artists we're so very proud to be collaborating with. Each play is beautiful, unique and funny. Our actors and directors, incredible. A fantastic night of theater is sure to be had!" The production runs from January 9 through 12 at the Hudson Theatre at 6539 Santa Monica Boulevard in Hollywood, California and is serving as a benefit for the Scholarship Fund at Warner Loughlin Studios, where Cardillo has been an instructor for six years. Visit Solstice: A One Act Play Festival to order tickets today.

Joan Fontaine passes away at 96.
On Sunday December 15 actress Joan Fontaine died in her sleep of natural causes in her Carmel, California home. In 1980, Fontaine appeared in several guest spots as Paige Williams on "Ryan's Hope" and even received a Daytime Emmy nomination for outstanding guest appearance. Soaps.com sends the actress' family and friends our deepest condolences.

Get the details on "Guiding Light" (ex-Lizzie Spaulding) and "One Life To Live" (ex-Stacy Morasco) alum Crystal Hunt's bar fight arrest and read which current soap operas are nominated for a 2014 Writers Guild Of America Award.