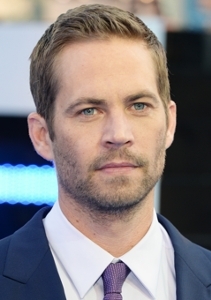 Paul Walker’s tragic death.
“The Fast and the Furious” franchise’s Paul Walker died at 40 on November 30 when the car he was riding in hit a post and exploded. An autopsy revealed that Walker died of trauma from the impact as well as thermal injuries from the ensuing fire. His family, friends, the acting community and fans were left stunned and saddened, including co-star Vin Diesel, who visited the crash site and used a police car’s speaker to thank fans for showing their love for the late actor, and who posted about his ‘brother’ on Facebook. “‘To live in the hearts we leave behind, is not to die.’ — Thomas Campbell. Pablo, I wish you could see the world right now… and the profound impact your full life has had on it, on us… on me… I will always love you Brian, as the brother you were… on and off screen.” Universal Studios announced they would donate some of the profits from the home video release of “The Fast and the Furious 6” to Walker’s charity. The studio also placed a temporary hold on production of “The Fast and the Furious 7” in light of Walker’s passing.

Amanda Bynes released.
Actress Amanda Bynes (“She’s The Man,” “Easy A”) has been released from the facility where she was being treated for schizophrenia and a bi-polar disorder, according to a report by TMZ. Bynes is in the care of her mother, and will live at her home while receiving out-patient therapy. Bynes has been ruled competent to stand trial on her DUI charge, which is still an outstanding issue for her.

Nigella Lawson admits cocaine use.
Testifying at the fraud trial of her former employees, Elisabetta and Francesca Grillo, “The Taste’s” Nigella Lawson admitted to having tried cocaine a handful of times, but denied being a habitual user. She claimed that rumors of her cocaine habit were perpetuated by ex-husband Charles Saatchi, who had threatened to destroy her if she failed to clear his name following an incident earlier this year in which he was photographed with his hands on her throat outside of a restaurant.

Justin Bieber joins Philippines relief.
Pop singer Justin Bieber is contributing to the relief efforts following Typhoon Haiyan by offering fans a chance to hang out with him in the studio when he records a new album. Rolling Stone reported that Bieber fans who donate money through Prizeo.com will be entered in the draw for a trip for two to Los Angeles for the meeting with Bieber sometime in the new year.

It's official! I've been cast in @FiftyShades of Grey as Christian's sister Mia. #FiftyShades

Simon Cowell’s girlfriend is divorced.
The X Factor’s Simon Cowell’s girlfriend, who is pregnant with his child, is officially divorced from her husband and Cowell’s former friend, Andrew Silverman. E! News reported that Lauren Silverman agreed to joint custody of their 7 year-old son in the settlement, which was finalized in New York Civil Court on Wednesday December 4.

Jay-Z and Beyonce's vegan challenge.
Married entertainers Jay-Z and Beyonce ("Dreamgirls," "Austin Powers in Goldmember") have begun eating a vegan diet for 22 days in honor of Jay-Z turning 44 years-old. The rapper, whose birthday was Wednesday December 4, posted on his blog, "On December 3rd, one day before my 44th birthday I will embark on a 22 day challenge to go completely vegan, or as I prefer to call it, plant-based!! This all began a few months back when a good friend and vegan challenged me to embrace a 'plant-based breakfast' every day. It was surprisingly easier on me than I thought..." He explained the duration of the diet as well. "Psychologists have said it takes 21 days to make or break a habit. On the 22nd day, you've found the way."

Lindsay Lohan is suing over Grand Theft Auto 5.
Lindsay Lohan ("Herbie Fully Loaded," "Freaky Friday") has instructed lawyers to sue the makers of the Grand Theft Auto 5 video game, according to TMZ. She allegedly believes they used her likeness in the game, and will launch a lawsuit for monetary compensation. Although some have speculated that the game character in question resembles Kate Upton or Shelby Welinder more than it does Lohan, the character at one point tries to escape the paparazzi, and also appears at a hotel that resembles the Chateau Marmont, where Lohan lived for a period of time.

Miley Cyrus' birthday gift.
Miley Cyrus ("Hannah Montana") received an interesting birthday gift from her father, country singer Billy Ray Cyrus; a customized Can-Am Spyder three-wheeler. Cyrus took her new ride, worth $24,000, out for a spin in Los Angeles. Her father, who also has a Spyder, posted about the gift on Twitter:

Basketball Wives' Evelyn Lozada is pregnant.
Evelyn Lozada, who appears on the reality TV show, "Basketball Wives," has announced she is six months pregnant, but People reported she is keeping the identity of the father under wraps. Lozada divorced Chad "Ochocinco" Johnson last year. She already has a 20 year-old daughter, Shaniece, from a prior relationship.

Christian Slater ties the knot.
Actor Christian Slater ("Interview With The Vampire," "True Romance") married his girlfriend of three years, Brittany Lopez, on Monday December 2 in Coral Gables, Florida. People reported that the couple spontaneously decided to wed while at the courthouse to pick up their marriage license for a ceremony they had planned later in the year.

Watch the soap stars in Beacon Hill The Series' spoiler video. Read Soaps.com's Primetime Dish to find out when to watch Brooklyn Nine-Nine.