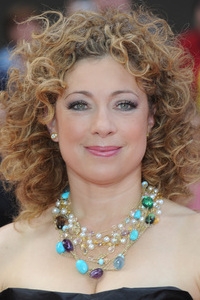 Soaps.com has a few early Christmas specials for the week of December 9, as well as more Hallmark holiday features, an ABC Family marathon, episode teasers, casting, a popular rock God heads to NBC, some FOX programming changes and more in our latest Primetime Dish column…

Arrow:
In the CW’s Wednesday December 11 8:00 PM episode titled “Three Ghosts,” Oliver is drugged and left for dead after a fight with Cyrus Gold AKA the Acolyte. Felicity makes a risky decision, which causes Oliver to hallucinate and confront his past. The connection between Barry and Felicity grows stronger. Someone is killed when a stakeout goes bad, and Brother Blood captures and tortures Roy.

In casting news… Alex Kingston, who was last seen in March as Dinah Lance, will return to her role beginning in episode fourteen, which will air in early 2014.

Brooklyn Nine-Nine:
Starting on Tuesday February 4 the FOX series will move to the 9:30 PM timeslot.

Dallas:
Season three will return to TNT with all new episodes in February 2014. Read Soaps.com’s Dallas Spoilers for a peek into the upcoming season, which will include a shooting, a pregnancy and a death.

Downton Abbey:
The PBS series will return with season four on January 5.

Finding Christmas:
The Hallmark Channel will air its original movie on Sunday December 15 at 8:00 PM. Starring Tricia Helfer (“TRON: Uprising”), country singer JT Hodges, Mark Lutz (“Ghost Whisperer: The Other Side”) and Cristina Rosato (“Trauma”) the story follows a New York adman, who trades his swanky loft for an aspiring musician’s North Carolina cottage as a means of escape after a proposal gone wrong.

Getting On:
In HBO’s Sunday December 8 10:30 PM episode titled “Make Someone Happy,” Patsy files a grievance against DiDi. Dawn learns a thing or two about intimacy with a co-worker. Someone lands in trouble with Dr. James when they decide to skip the Make Someone Happy orientation. A patient named Birdy and her gentleman caller are caught in a romantic situation, and a ward-wide deep cleaning is planned.

Glee:
Read our Glee Spoilers to find out when the FOX series returns from mid-season break in 2014.

Hats Off To Christmas:
On Saturday December 14 at 8:00 PM the Hallmark Channel will air its original movie starring Haylie Duff (“Blackout”), Antonio Cupo (“Bomb Girls”) and Sean Michael Kyer (“Continuum”). The premise surrounds a loyal and hard-working manager of a small town Christmas hat shop, who is surprised after her boss asks her to train his son for a vacant upper-management position – one that she’s been wanting.

iHeart Radio Katy Perry Special:
On Tuesday December 10 at 8:00 PM the CW will air a repeat of the October 25 special.

iHeart Radio Lady Gaga Special:
On Tuesday December 10 at 9:00 PM the CW will air a repeat of the November 19 special.

Kung Fu Panda Holiday:
On Monday December 9 at 8:00 PM the CW will air the holiday special featuring the voices of Jack Black (as Po), Angelina Jolie (as Tigress) and Dustin Hoffman (as Shifu). Po, the Kung Fu Panda, has to choose between hosting an exclusive formal banquet for all the Masters of Kung Fu or attending his father’s party.

Merry Madagascar:
On Monday December 9 at 8:30 PM the CW will air another holiday special featuring the voices of Ben Stiller (as Alex), Chris Rock (as Marty) and David Schwimmer (as Melman). Alex, Marty, Gloria, Melvin and the penguins have to save Christmas after Santa and his reindeers crash onto Madagascar.

Nikita:
It's all about a deal of a lifetime in the CW's December 13 9:00 PM episode titled "Pay-Off." Friday episode teasers: Amanda is benched from the operation. Nikita and the entire team are offered complete freedom, which comes with a price. Nikita is forced to call Alex for a pay-off. Sam contemplates stealing some diamonds, and Michael comes face-to-face with an old adversary.

Once Upon A Time:
TVLine has learned that Alexandra Metz ("The Originals," "Chicago Fire") has been cast as Rapunzel and will first appear in episode fourteen, after the ABC series returns for the second half of season three on March 9. Until then, tune in on Sunday December 15 for the winter finale.

One Direction iHeartRadio Album Release Party:
On Monday December 9 at 9:00 PM the CW will air the special, hosted by Ryan Seacrest, to celebrate the release of the band's new album "Midnight Memories." Viewers will enjoy a live performance and a Q&A. An encore of the special will air on Wednesday December 25 at 9:00 PM.

Parenthood:
John Corbett, who was last seen in 2012, will return to guest star as Seth Holt in episode thirteen. The NBC series returns on Thursday December 12 at 10:00 PM.

Reign:
In the CW's Thursday December 12 9:00 PM episode titled "Fated," Mary makes a decision that will change her and Francis' relationship forever after learning someone will die very soon. Clarissa acts bolder, and Diane's plan for Bash backfires.

Revolution:
Bret Michaels, frontman for the band Poison, will appear in a 2014 episode as his post-apocalyptic self. Fans will also be treated to Michaels singing the band's 1988 power ballad "Every Rose Has Its Thorn." The NBC series returns on Wednesday January 8 at 8:00 PM.

Switched At Birth:
The ABC Family series will return with season three on January 13 at 8:00 PM. Prior to that, starting at 12:00 PM, the network will air past episodes to get viewers caught up before the premiere.

Six weeks until the #SwitchedatBirth premiere! Which character are you most excited to see? pic.twitter.com/dYpULxtGTe

The Blacklist:
Renewed! NBC has renewed its freshman series and will bring viewers twenty-two more episodes for season two, which will premiere in the fall of 2014. Stay tuned for the return of season one on Monday January 13 at 10:00 PM.

The Carrie Diaries:
In the CW's Friday December 13 8:00 PM episode titled "I Heard A Rumor," Carrie reads a nasty rumor about herself in a New York City gossip rag. Samantha plans to set the record straight. Walt helps Bennet at Interview. Mouse does something very risqué in regards to the rut her and her boyfriend appear to be in, and Sebastian reaches out for help when Maggie experiences a medical emergency.

The Following:
FOX has made some changes and will now premiere season two with two return episodes. Tune in Sunday January 19 at 10:00 PM then again on Monday January 20 at 9:00 PM.

The Mindy Project:
The FOX winter finale will air on January 28.

The Originals:
Elyse Levesque ("Cedar Cove") has landed a recurring role as a witch named Genevieve. Look for the actress to begin appearing in episode thirteen after the series returns from its mid-season break on Tuesday January 14.

The Tomorrow People:
In the Wednesday December 11 9:00 PM episode titled "Death's Door," Stephen can't help John without revealing himself to Ultra. The Tomorrow People help Stephen find out the truth surrounding his father's disappearance, and Cara and Russell's trade with Jedikiah comes with a big risk.

The Vampire Diaries:
Read Soaps.com's The Vampire Diaries Spoilers to find out what comes back to haunt Damon in the CW's Thursday December 12 8:00 PM episode titled "Fifty Shades Of Grayson." We will post the recap after the show airs.

Witches Of East End:
Season finale! On Lifetime's Sunday December 15 10:00 PM season finale episode titled "Oh, What A World," Freya's wedding day has arrived. Wendy and Joanna discover who the shifter is. Ingrid uncovers something disturbing about Mike, which leads him to take dangerous measures to complete his plan.

The actress who plays Lena Adams on "The Fosters" and her former soap star husband (ex-Antonio Vega, "One Life To Live") have something to celebrate these days, as Sherri Saum and Kamar de los Reyes are expecting twins.