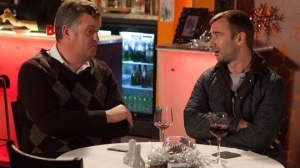 Carl and Roxy get close. (BBC)

Dennis’ plans fizzle on “Coronation Street.” Lauren tries to hurry things along with Jake on “EastEnders.” A battle over Christmas decorations breaks out on “Emmerdale.” And Sam searches for the truth behind the attack on “Hollyoaks.”

Coronation Street:
Spoiler alert: Gary’s old squad mate Khalid comes to Weatherfield looking for work. After he meets up with Dev, the shopkeeper offers him a shot as his personal trainer. Nick could also use some of his help getting back into shape. Meanwhile, Todd starts to manipulate Marcus and prepares to break Sean’s heart after getting his hopes up.

After seeing how desperately David misses the children, Gail is left trying to figure out where she stands and what kind of future her family has. Following yet another battle with Kylie, David realizes he may have really lost everything for good. Kylie could still stand to lose some more. Things aren’t looking much better for Brian and Julie. After Todd tips her off about the school head master lying to her, they have a big argument and are left wondering if there is anything left for them to cling to.

EastEnders:
Spoiler alert: Kat’s suspicions about what happened to Michael are raised after she has a visit with Alice. As she contemplates what to do, Joey is left facing the consequences for his actions after the games he’s been playing with Janine turn sour. She’s got other fish to fry as well. After she turns down a deal from David, she shifts her attention to another scheme.

With her relationship with Dexter in a mess, Ava wonders if she should really leave Walford for the job she’s been offered. Dexter is distracted from this by other things. He reveals Jay’s cheating to Abi and causes a big upset. Meanwhile, Cindy tells Terry Junior a lot of things about the family he’d rather not hear. He starts to act out and causes a disruption. And Phil prepares to ruin Christmas for Alfie.

Rakhee Thakrar (“Cloud 9”) will be taking on the role of Shabnam Masood. The character left the series in 2008. Look for her to make her first appearance in January 2014.

Emmerdale:
Spoiler alert: As Declan is busy gambling away everything that he has, Zak worries to Megan about him. Pretty soon, she’s making a choice that leaves Declan stunned. Meanwhile, the battle for the vicarship heats up. Harriet resorts to some rather underhanded activity to stop Alfie from going to the bishop with some complaints. Ashley starts to think that Harriet isn’t quite right. Finally, Jude actually appoints a vicar for the village.

Katie is disgusted with Ross after hearing about the bet he made with Adam. She turns to Vanessa to vent and they start getting friendly. Later, Katie tells Adam all about her feelings. Things aren’t going so well for Charity. Determined to make a point, she winds up nearly running down Archie and Rachel. While she is left wondering what Jai will think, Georgia is trying to set Priya up on a date. But Priya is more distracted by her upcoming scan, mostly because she is still clueless about the latest on David and Alicia.

Hollyoaks:
Spoiler alert: While Patrick is feeling lousy, Mercedes is busy trying to spook Cindy away from Browning's inheritance. Cindy is also feeling some pressure from Dirk, but it may not be enough to get her to let a big secret out. However, Cindy does let something out and leaves Mercedes distraught. Meanwhile, Fraser manages to ruin someone else's life.

Jim's secret is out of the bag. Carmel discovers what he's been hiding and doesn't know how to handle it. Tilly isn't sure how to handle things either. Her date with Esther falls apart and she's left jealous. She winds up making a desperate move while Dodger makes a move on a former flame. Across the village, Sienna pushes ahead with her nasty scheme but soon notices that Tom knows what she's up to. And Nancy stumbles on something so shocking that the rest of the village may have a hard time believing that it is true.

Get a look backstage at "Hollyoaks" while DJ Nick Grimshaw shoots his appearance on the soap.

Neighbours:
Spoiler alert: This year's "Neighbours" season finale airs on December 6. It will be back in the new year.

Have an opinion you need to make public about what's been happening on your favorite soaps? Be sure to cast your vote in Soaps.com weekly Soap Opera Polls. And then learn who Brady chased through the slums of Salem on Days of our Lives.