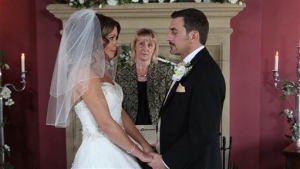 Jake turns on the charm. (BBC)

Peter faces temptation on “Coronation Street.” Changes are coming to Walford thanks to Ronnie’s big reveal on “EastEnders.” David and Alicia book a wedding date on “Emmerdale.” Sienna’s world falls apart as her lies are revealed on “Hollyoaks.” And a secret about Lauren’s past with Brad comes out on “Neighbours.”

Coronation Street:
Spoiler alert: After David and Kylie have another big blow-out, Gail is forced to make a hard choice. It looks like David could be out for good, but that may only make things even worse for Kylie. Meanwhile, Weatherfield feels a bit of a spark when Dev’s personal trainer shows up on the street. Kal tries to work the shopkeeper into shape and soon decides to try helping Nick as well.

Brian is faced with having to choose between his new job and Julie. The choice is made harder thanks to Todd landing him in a heap of trouble. Brian has to think fast when Julie confronts him about the lies he has been telling her. She can’t understand what has gotten in to him. He can’t understand either. And Tim passes his business ideas by Jason, but it’s clear that the two men are not seeing eye to eye.

EastEnders:
Spoiler alert: Terry and Bianca’s relationship is already hitting the skids. She’s not sure how to save it and turns to David for a little support to help deal with Terry’s ex. Things quickly spiral out of control. Meanwhile, things are also going all wrong for Kat. After being forced into a corner, she takes an offer she would rather have avoided, but her attempt to do the right things soon goes wrong.

Janine has some doubts in her mind after Billy hears who she has hooked up with and tries to scare her off getting any closer to him. Across the square, Joey winds up in an awkward position after he gets too close to a certain lady. He tries to smooth things over with Alice but Carol soon ruins that plan. And Alfie manages to make things worse when he continues refusing to accept Ronnie’s choice.

Emmerdale:
Spoiler alert: Moira's feeling conflicted, and not only because of her new guest. While Cain and Moira's relationship deteriorates, things are getting worse for Pollard. He causes a scene with Rodney and Bob has to step in to break things up. Rodney remains furious after being pranked by Val and Pollard. While he thinks of revenge, Sean contemplates a money-making scheme as Ali confronts Harriet over tackling him.

Jai shocks Charity with an over the top gift. Pretty soon after, she's sending out some shocks of her own. She makes a decision that doesn't sit well with some and winds up feeling incredibly uncomfortable when the family heads to Santa's grotto for a visit. Meanwhile, Ross tries to take off and nearly winds up dead. Coming back from the brink causes some ripples around town. And Laurel is also feeling ill at ease after her day in court.

Hollyoaks:
Spoiler alert: Trevor is determined to get damning evidence before he knocks off Tony for being a rat. It's not long before Tony gives him all the evidence he could want. Trevor picks him up and they drive off to the wasteland. But even if Trevor has gotten rid of this problem, his could be far from over after Fraser finds something out.

Ziggy is thrilled when she lands a role in a commercial, but little does she know it is all part of a revenge scheme by Ruby. Meanwhile, Mercedes and Cindy head to the Browning's funeral. But as soon as the service is finished, Cindy demands that Mercedes fork over half of the life insurance money. And if she wasn't already upset, things get worse for Cindy when she loses someone close to her.

Take a look backstage at the latest Roscoe wedding on "Hollyoaks."

Home and Away:
Spoiler alert: This year's "Home and Away" season finale airs on Wednesday November 27. It will be back in the new year.

Neighbours:
Spoiler alert: While Georgia refuses Kate's bid for reconciliation, Bailey gets busy unburdening himself about his history with Gem. Georgia decides that it is time for her and Gem to leave Erinsborough behind but that plan soon goes sour as Georgia is left in trouble. Meanwhile, although Susan tries to hide it, Karl learns that she has relapsed and this poses a threat to his mayoral campaign.

After Josh and Amber break up over Ruby, she's left wondering if the other woman is the only problem. Across town, Sonya attempts to be helpful to Jacob but he leaves her holding his baby when he takes off. She starts to worry when it looks like he's not actually coming back. And Paul manages to stay ahead of both Teresa and Lucy.

Get a few more "Neighbours" spoilers in this special sneak peek at the rest of the year.

Have an opinion about what's been happening lately on your favorite soaps? Be sure to cast your vote in Soaps.com weekly Soap Opera Polls. And then learn what happened when Thorne's daughter popped up on The Bold And The Beautiful.

Performer of the Week: Paul Bettany