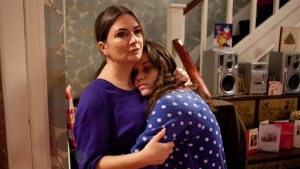 Steve takes off with his new friend on “Coronation Street.” Lola concocts a scheme to get Peter’s attention on “EastEnders.” Edna and Ashley have a houseguest on “Emmerdale.” Ruby goes looking for revenge on “Hollyoaks.” It’s an explosive season finale on “Home and Away.” And Joshua and Amber take the next big step on “Neighbours.”

Coronation Street:
Spoiler alert: Things are not looking good for Faye when video evidence surfaces which could land her in some serious trouble. Anna can hardly believe what’s happening as Faye is brought down to the police station thanks to her bullying. Faye is terrified of what’s going to happen to her and Anna does her best to try and reassure her.

As Peter worries about his son, Tina offers him her support. He appreciates it but not everyone is happy to see them get closer. After Peter has an upsetting day, it takes Tina’s presence to calm him down and pretty soon they are getting uncomfortably close. Meanwhile, Roy continues facing his discomfort with Hayley’s condition. She manages to convince him to come to the funeral parlor with her so they can make arrangements for what’s ahead.

EastEnders:
Spoiler alert: As the wedding day arrives, Alfie is left wondering if he really wants to go ahead with it. Roxy is having some mixed feelings herself. A lot of that is due to Kat, who is left in an awkward position when Roxy offers her a truce. Roxy then gives Ronnie an ultimatum about the wedding and gets prepared to walk down the aisle.

Sam goes into a panic when he realizes that Ava has stumbled onto his shocking secret. She gives him an ultimatum and he is forced to ponder whether or not it’s time to leave Walford behind. Meanwhile, Tina gives Phil a push too far so he kicks her, and Shirley, out. Shirley is not thrilled that her sister just made them homeless, but she quickly comes up with a plan to get them off the streets.

Emmerdale:
Spoiler alert: Alicia may be miserable, but David is thrilled after he hears the latest from Priya. Pollard warns him that he shouldn't be so happy about it. David rushes off to reconcile with Jacob but that could prove difficult. After David and Alicia wow him with their news, Pollard is left shaking his head. Telling Priya the news doesn't go much better.

When Charity's attempt to reconcile with Jai falls apart, she decides it's time for revenge. She's distracted when a drunken Cain tries to cheer her up and winds up sending her the wrong signals. Meanwhile, Robin refuses to believe that Megan's bruise was really an accident. She changes the topic by tipping him off about the tempting offer Gil has made her. And Rhona confesses the reason why her condition is not improving to Paddy.

Hollyoaks:
Spoiler alert: While the town gathers to give Tony the Pride in the Community Award, he's busy putting together a drug deal with Trevor and Sam. After Sam witnesses Tony selling some coke to Ray McCormick's thugs, she calls in the cops to arrest the buyers. By the time Tony gets to the club, Ray is looking for revenge and shows up with some thugs to pound on Tony and Trevor.

Things go downhill fast for Darren and Sienna. He's afraid to tell her that he has feelings for Nancy, but Sienna already knows more than she's letting on. After she gives him a warning, he soon finds himself facing allegations as the murder investigation moves ahead. Meanwhile, Frankie and Ziggy wind up in bed together. Ruby almost walks in on them but Ziggy manages to jump out the window naked. Unfortunately, he gets stuck on the ledge and has to be rescued by a firefighter. The whole thing is recorded and the video winds up in Ruby's hands.

Take a look at what's ahead for the people of "Hollyoaks" this week.

Home and Away:
Spoiler alert: Ricky decides it's time to face the music and tell Brax that she's pregnant. This does not end well. He dumps her and starts acting more erratically than usual, causing considerable concern to his brothers. While Brax tries to face the consequences of his actions, Ricky is left alone and in a panic when she fears she could be losing the baby.

Plans for the music festival continue to move ahead. John gets dragged into it, but worries what kind of ruffians it could bring. Kyle and Tamara continue to get closer thanks to working together on the project. But things aren't going so well for everyone. Roo and Alf are wondering if they should break up Maddy and Josh. Meanwhile, Ethan returns with the hope that he can get his children back. And the week ends with a giant explosion ripping through things.

Neighbours:
Spoiler alert: Gem continues trying to isolate Georgia from her friends. It seems to be working since Georgia's paranoia about those around her is only growing. Even if her suspicions are unfounded, that can't be said for Bailey, who has caught on to what kind of person Gem really is. The fact that she is blackmailing him is a big clue. Bailey tips Mason off about this. He's feeling pretty betrayed himself thanks to Kyle and Kate, but things may be looking up for him and Imogen.

Kate is miffed that her secret was leaked and is determined to find out how it happened. She becomes party to someone else's secret when Susan tells her about her illness while keeping it from Karl. Meanwhile, Matt manages to learn that Lauren has been dreaming all about Brad. He starts sneaking off and Lauren soon finds out why. And Terese is disturbed to find out about the rather dubious deals that Paul has been making.

Ashleigh Brewer has announced that she will be leaving the role of Kate Ramsay behind. The actress has been on "Neighbours" for the past five years and has decided to move on to other things. Her final air date has not been released.

Excited about what's been happening lately on your favorite soaps? Be sure to cast your vote in Soaps.com weekly Soap Opera Polls. And then learn what happened when Bill showed his true colors on The Bold And The Beautiful.

‘The Masked Singer’ Reveals the Identity of the Orca: Here’s the Star Under the Mask

National Assn. Of Broadcasters Adds Byron Allen. Others To TV Board