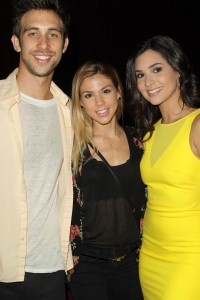 Don’t make me tell you that I told you so.

There’s intrigue, love lost and gained, and ominous threats and warnings for more than one individual.

Days of our Lives:
Nick fears that Gabi may not move to New York, Eric is heartbroken over being suspended, and a kiss is exchanged between Daniel and Nicole. The Days of our Lives Spoilers tell us who surprises Theresa with a visit in Salem.

General Hospital:
A decision is made in Connie’s custody hearing, someone discovers Robin in Port Charles, and Faison does something drastic. Soaps.com’s General Hospital Spoilers indicate Luke has something new to worry about.

The Young And The Restless:
Billy doesn’t want Victoria to give up on him, Victor and Kyle toy with each other, and Sharon saves Summer. Visit The Young and The Restless Spoilers and learn which two people end up having an exciting evening in Genoa City.

Read Soaps.com’s Weekly Soap News where you can find out which soap star is moving from Port Charles to Genoa City and learn about Bradford Anderson’s NCIS: Los Angeles appearance. Read an update on rumors about the future of All My Children and One Life To Live being cancelled.