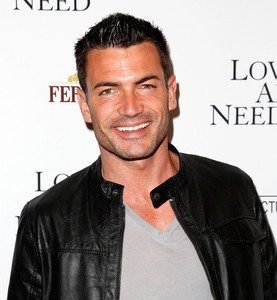 Catching up with the former soap stars.

Soaps.com has details for current projects for some former actors of Daytime cancelled soaps, “All My Children,” “Another World,” “As The World Turns,” “Generations,” “Guiding Light,” “Loving,” “Ryan’s Hope,” “One Life To Live” and “Passions.” There are film roles, baby news, holiday Hallmark movies, one actor gets cute with a bunch of kittens, a stage performance and more in this month’s after-Daytime column.

Aiden Turner to attend Kitten Bowl.
The Hallmark Channel will air its first annual Kitten Bowl on Sunday February 2, 2014 from 12:00 PM to 9:00 PM. Beth Stern (official radio voice of the New York Yankees) will host with various stars in attendance, including “All My Children’s” Aiden Turner (Pine Valley’s ex-Aidan Devane). Throughout the event, which will coincide on the same date as Super Bowl XLVIII, viewers will be able to upload their favorite cat stories, pictures and videos and share why their cat is the funniest, most daring or remarkable cat on the planet. Visit Hallmark’s Kitten Bowl for more information. Since leaving his Daytime role Turner has appeared on “Single Ladies,” “In The Dark,” “The Perfect Boyfriend” and is currently working on “To Have And To Hold,” where he’ll play Miles Cambridge in 2014.

Paula Garces gives birth.
People is reporting that Paula Garces (“All My Children’s” ex-Lea Marquez/Sinnamon, “Devious Maids”) and her husband Antonio Hernandez welcomed a son Antonio Andres Hernandez at 4:40 PM on Wednesday November 20. This is the couple’s first child together, weighing 7 lbs., 5 oz. Garces has a daughter, Skye Mahoney, from a previous relationship. Soaps.com sends the family our very best!

George Reinholt passes away at 73.
Soaps.com sends the family and friends of former soap star George Reinholt our deepest condolences. The actor passed away at the Taylor Hospital in Ridley Park, Pennsylvania after a battle with cancer on Monday November 11. Reinholt played Erik Fulda on “The Secret Storm” in 1954, Steven Frame on “Another World” in 1964 and Tony Harris Lord on “One Life To Live” in 1968.

Alicia Minshew in The Funeral Guest.
Alicia Minshew (“All My Children’s” ex-Kendall Slater) will appear in the upcoming film “The Funeral Guest.” Look for the former Pine Valley star to play Robin Hunter, as a lonely girl named Emily Butler (Julianna Robinson) tries to find her place in the world by attending the funerals of strangers.

Just wrapped on the fun film #TheFuneralGuest starring the beautiful @JRuberstar. Here I am in bitch mode! pic.twitter.com/bvlGisVrga

Michael Park in The Sound Of Music Live.
Michael Park (Oakdale’s ex-Jack Snyder, “As The World Turns”) will join Maura West’s (“General Hospital’s” Ava) son Joe West in the one night production of “The Sound Of Music Live.” Look for Park to play Baron Elberfeld when the show airs at 8:00 PM on Thursday December 5 on NBC. Scott DeFreitas (ex-Andy Dixon, “As The World Turns”) and John Bolger (ex-John Sykes, “One Life To Live”) will also appear, along with singer Carrie Underwood, during the three hour live show.

Ellen Dolan in After Life.
"As The World Turns'" Margo Hughes portrayer, Ellen Dolan, will appear as Lynn in the new film "After Life," which is currently in the post-production stage. The story surrounds a woman who tricks people into thinking she can contact their dead loved ones until she meets a man whose missing wife leads to a big change in her life. Michael Learned (ex-Shirley Smith, "General Hospital") also appears.

Frank Grillo lands Navy St. role.
Frank Grillo, who played "Guiding Light's" Hart Jessup from 1997 to 1999, is the latest actor cast in DirecTV's new original series "Navy St." The hour-long show is described as a gritty family drama and will consist of ten episodes. Grillo, who has trained with mixed martial arts (MMA) trainer Greg Jackson, will play a gym owner named Alvey Henderson. As of yet a premiere date has not been announced. Grillo is married to Wendy Moniz (ex-Dinah Jessup, "Guiding Light," ex-Mayor Finn, "One Life To Live").

Murray Bartlett and Jonathan Groff in Looking.
Murray Bartlett ("Guiding Light's" ex-Cyrus Foley) and Jonathan Groff ("One Life To Live's" ex-Henry) will co-star with Frankie Alvarez ("Smash") in the new HBO drama "Looking." Set to premiere on January 14, 2014 the series takes place in San Francisco, California and follows a group of gay men. Bartlett will play Dom, with Groff as Patrick and Alvarez as Agustín. Watch a video promo of the actors in their new roles.

Ron Raines in Annie.
Before his "One Life To Live" role as Llanview's Carl Peterson Ron Raines played Springfield's Alan Spaulding for fifteen years on "Guiding Light." Now Raines is set to take the stage as Daddy Warbucks in Broadway's "Annie." The actor will step into the role beginning on Tuesday December 10 through the final performance on Sunday January 15, 2014 at the Palace Theater at 1564 Broadway (46th and 47th Streets) in New York City, New York. Visit Annie: The Musical to reserve your tickets today.

Matt Walton's Think Tank Series.
Matt Walton, who will be remembered as one of Daytime's evilest villains, "One Life To Live's" Eli Clarke, is starring in the new A&E Network online series "Think Tank." Walton plays the role of Pierre Brimage, the managing director of The Woodbine Foundation. The series follows a team of geniuses, The Woodbine Foundation, that sets out to cure the world of all problems. Walton posted on his official Facebook, "Very excited for the launch of my new show on A&E! Granted it's online only at the moment, but hopefully we'll get some 'Duck Dynasty' traffic (though arguably a slightly demo)." Viewers can watch Think Tank episodes online and meet Walton's character below.

Farah Fath in Blank and Non-Stop.
Farah Fath, who played "One Life To Live's" Gigi Morasco Balsom as well as "Days of our Lives'" Mimi Lockhart, will be taking part in the upcoming play "Blank," the story of a New York playwright living in Connecticut and working in the city. As of yet there are no details as to who Fath will play. For more about the production visit Blank, to which the actress tweeted:

I'm doing a play @BLANKonSTAGE in Hollyweird that opens in January. This is your first warning.

Update: Fath's "Non-Stop" role was apparently cut from the film. The actress tweeted:

Don't be! My part got cut ?RT @wishingwell50: @FarahFromKY Can't wait to see you Friday night in Non-Stop on LMN!!

Ryan McPartlin in Do It Yourself.
Former "Passions" actor Ryan McPartlin (Harmony's ex-Hank Bennett, 2004) will play Tyler in the upcoming TBS pilot titled "Do It Yourself." The story follows a laid-off 20-something math teacher (Ben Rappaport, "The Good Wife"), who ends up working for a big box home supply store. Cheech Marin ("Cheech & Chong") also stars as Perez.

Mary-Louise Parker plays opposite Andy Garcia in Christmas In Conway.
Mary-Louise Parker, most recognized for her seven year role as Nancy on "Weeds," got her start in showbiz with a small appearance in 1975 on "Ryan's Hope." On Sunday December 1 at 9:00 PM she'll play opposite veteran actor Andy Garcia ("The Godfather") in "Christmas In Conway" as Suzy and Duncan Mayor. Duncan wants to make his wife's Christmas fantasy become a reality by setting up a real Ferris wheel in their backyard. Tune in to ABC to witness the magic of Christmas unfold and watch this behind the scenes video for a sneak peek from the actors.

Read Soaps.com's Primetime Dish to learn about Jason Ritter's Parenthood role and view our Glee Spoilers to hear what Blaine and the glee club will be arguing over in the new FOX episode titled "Puppet Master" on Thursday November 28 at 9:00 PM.