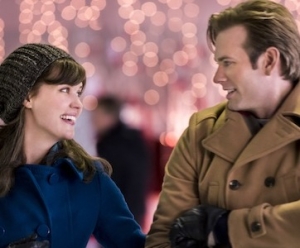 There may not be a new episode of “The Originals” during the week of November 18, but Soaps.com has details about a Lady Gaga special airing in its place, full season orders for a few freshman series, as well as episode teasers, a couple of FOX interviews, a possible reboot of a 1980s horror series, casting and more in our latest Primetime Dish column…

Almost Human:
Interview! Soaps.com sat in on a conference call with the FOX series’ executive producers J.J. Abrams and J.H. Wyman. When asked what makes them tick, as creative partners, Wyman joked, “I think it’s my singing voice,” to which Abrams chimed in, “I think I have to agree with Joel. I think that the fun of working with someone who loves the ‘what if’ and is able to imagine situations and characters that make you laugh as much as it makes you squirm because the ideas are so close to what’s possible. On ‘Fringe’, as crazy as things were, and it got pretty crazy, they were so often things that felt like, God, that just seems like something that might be happening right now. Then almost invariably you’d read about something within weeks or months that proved that out. It’s always been fun working with Joel and ‘Almost Human’ is no different.”

Arrow:
In the CW’s Wednesday November 20 8:00 PM episode titled “State V. Queen,” Oliver becomes concerned when Diggle and hundreds of people are infected by a mysterious illness. Vertigo is discovered in Diggle’s blood, which proves The Count has escaped from prison. As Moira goes on trial, ADA Adam Donner collapses in court with Vertigo symptoms, and The Count traps Felicity.

Beauty And The Beast:
Thanksgiving is celebrated in the CW’s November 18 9:00 PM episode titled “Guess Who’s Coming To Dinner?” Cat plans to spend Thanksgiving with her father in order to get information on Vincent’s missions. When Tori and Gabe join Cat, secrets and true feelings are revealed, and Tess and JT encounter a Thanksgiving surprise of their own. In casting news… Elisabeth Rohm (“The Client List,” “One Life To Live’s” ex-Dorothy Hayes) will appear as a FBI agent in four episodes this season.

Boardwalk Empire:
In HBO’s Sunday November 17 9:00 PM episode titled “Havre de Grace,” Nucky is warned that there’s a skunk in his cellar. Oscar and Chalky hide outside of Wilmington, and Gillian debates starting a new life with Roy.

Bones:
Kelly Rutherford (“Gossip Girl”) will guest star in an upcoming episode of “Bones” as Stephanie McNamara. Beginning on November 15 the FOX series will move to Fridays at 8:00 PM.

Interview! Soaps.com sat in on a conference call with the FOX series’ executive producer Stephen Nathan. When asked if they have any plans to bring Aldo or Danny back to the show, Nathan stated, “They will definitely reappear. Danny, we are working on that episode now. Again, this will be next year. This will, again, be probably in February, and it will be an episode which sort of teams Booth and Danny in a common cause, but also causes Booth to question Danny in a way that hopefully will be very surprising. That will be on whatever night Fox puts us on in January or February.”

Bordertown:
From “Family Guy’s” Mark Hentemann and Seth MacFarlane comes the new FOX animated comedy about two families living in a Southwest desert town on the US/Mexico border. The series will debut during the 2014/2015 season with thirteen episodes.

Cougar Town:
Matthew Perry will guest-star in the TBS series sometime this winter, which will reunite him with his former “Friends” co-star Courteney Cox. Stay tuned for Perry’s upcoming air date and tune in for season five’s premiere on Tuesday January 7 at 10:00 PM.

Coven:
Co-creater Ryan Murphy took to Twitter to announce that singer Stevie Nicks will make a guest appearance in an upcoming episode of the FX “American Horror Story” series. Tune in Wednesdays at 10:00 PM.

Guess who's visiting the Coven? The legendary Stevie Nicks!

Fir Crazy:
On Sunday November 24 at 8:00 PM the Hallmark Channel will air its original holiday movie. Starring Sarah Lancaster (“Chuck”), Eric Johnson (“Rookie Blue”) and Colin Mochrie (“The Ron James Show”) the feature follows Elise MacReynolds (Lancaster), who is forced to sell trees on her family’s Christmas tree lot where sparks fly and a fight to save her family’s business begins.

Glee:
Read our Glee Spoilers to find out what the future holds in FOX’s Thursday November 21 9:00 PM episode titled “Movin’ Out.” Stay tuned for our recap after the show.

Grey’s Anatomy:
Read our Grey’s Anatomy Spoilers to find out why Cristina turns to Shane in ABC’s Thursday November 21 9:00 PM episode titled “Somebody That I Used To Know.” Soaps.com posts recaps weekly after the show airs.

Hart Of Dixie:
It’s all about feeling pressured in the CW’s November 18 8:00 PM episode titled “I Run To You.” Monday episode teasers: Zoe worries when Joel and Wade’s extracurricular activities affect Joel’s writing. Lavon claims he has no time to talk to AnnaBeth due to his coaching obligations. Lemon coxes Brick to date again, and Lynly and George debate talking to Lavon about their feelings.

Hot In Cleveland:
Singer Chris Isaak (“Wicked Game”) will guest star in the TBS series’ 2014 season five. Fans can except his character, Chase Jackson, to turn up sometime in the spring.

iHeartRadio Album Release Party With Lady Gaga:
On Tuesday November 19 at 8:00 PM the CW will air the one-hour special to celebrate the release of Lady Gaga’s new album “Artpop.” The event, which was filmed in Brooklyn, New York on November 10, will include performances of several songs, behind-the-scenes moments, an interview with artist Jeff Koons, who collaborated with Gaga on new art installations, as well as Ryan Seacrest’s interview with Lady Gaga.

Nikita:
Season premiere! The final fight begins in the CW's November 22 9:00 PM season premiere titled "Wanted." Friday episode teasers: When a reporter starts questioning what really happened the night Nikita was framed for the assassination of the President of the United States, she walks into a trap. Michael and the team set out to find Nikita before Amanda does, and Alex is stunned when someone suddenly appears.

Perception:
The TNT series returns with all new episodes on Tuesday February 25 at 10:00 PM.

Ravenswood:
In ABC Family's Tuesday November 19 8:00 PM episode titled "Scared To Death," Caleb thinks Miranda is in danger and tries to calm Hanna down. While visiting the old bank the kids learn something about the curse, and Olivia plans to reunite with Dillon.

Reign:
Full season pick-up! The network has picked up its new series for a full season and will produce nine more episodes. In the CW's Thursday November 21 9:00 PM episode titled "Chosen," Queen Catherine tries to scare Mary and takes extreme measures to make sure the guilty party is caught. Francis focuses on Olivia. Bash attempts to pay a debt but ends up with blood on his hands, and Kenna admits she had an affair with the King.

Revenge:
Read Soaps.com's Revenge Spoilers to find out what Emily's up to now in ABC's Sunday November 24 9:00 PM episode titled "Surrender." Stay tuned after each weekly episode for Soaps.com's recap.

Supernatural:
In the CW's Tuesday November 19 9:00 PM episode titled "Bad Boys," Dean's old friend Sonny needs help with a ghost. Sam asks Dean for more information in regards to his past with Sonny, and Sam and Dean scramble to find a murderer before another death occurs.

Tales From The Darkside:
Reboot? The CW is currently looking into rebooting the George A. Romero 1980s anthology horror TV series. Stay tuned for further details as they come.

The Carrie Diaries:
In the CW's Friday November 22 8:00 PM episode titled "Too Close For Comfort," Carrie spends the day with playwright Adam Weaver. Samantha books a new job as a nude art model and sees a student's painting she doesn't like. Sebastian finds support in surprising places after his mother announces she is marrying her tennis instructor boyfriend, and Dorrit's boyfriend attempts to get closer to her.

The Originals:
Full season pick-up! The CW has ordered nine more episodes of its other new series, giving it a full season pick-up. In other news… The network will not air a new episode on Tuesday November 19 at 8:00 PM. The "iHeartRadio Album Release Party With Lady Gaga" will air in its place. Joseph Morgan, who plays Klaus, tweeted:

Thanks for watching last night. There's a little break before the next episode for the U.S. but trust me, it will be worth it. #TheOriginals

The Tomorrow People:
Episode pick-up! The CW has also ordered nine more episodes of its freshman series. In the Wednesday November 20 9:00 PM episode titled "Limbo," Stephen has fun with his newfound powers, which leads Jedikiah to do damage control. Tension arises between John and Cara, and Stephen needs help from the Tomorrow People and is determined to find out what happened to his father.

The Vampire Diaries:
Read Soaps.com's The Vampire Diaries Spoilers to find out what shocking discovery Damon makes in the CW's Thursday November 21 8:00 PM episode titled "Dead Man On Campus." Soaps.com will post the recap after the show airs.

True Blood:
Stephen Moyer, who plays Bill on the HBO series, will direct an upcoming season seven episode. The series' final season is set to return in 2014. The actor also directed episodes in seasons five and six.

Witches Of East End:
On Lifetime's Sunday November 17 10:00 PM episode titled "Unburied," a familiar face is summoned by the shifter. Ingrid uncovers something stunning from her past. Freya's tarot cards are read. A novelist arrives in East End to research his new book, and Wendy sets out to get serious with Leo.

Read Soaps.com's After The Soap Finales: Where Are They Now to find out about former "One Life To Live's" (ex-Jared Banks) John Brotherton's Fast & Furious 7 role.