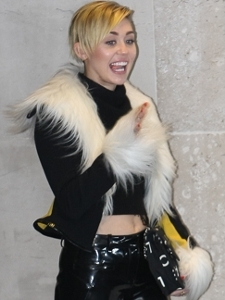 Zac Efron breaks jaw.
People reported that Zac Efron (“The Lucky One,” “High School Musical”) slipped in a puddle at his Los Angeles area home on Sunday November 10 and broke his jaw. As a result, he had to have his jaw wired shut and also received stitches for a gash on his head.

Miley Cyrus lights joint at MTV awards show.
Former “Hannah Montana” star Miley Cyrus made headlines again this week when she acted up at another music awards show. Following up on her twerking controversy at the VMAs, Cyrus created a brand new uproar by lighting what appeared to be a marijuana joint at the MTV European Music Awards (EMAs) in Amsterdam (where personal marijuana is legal) while accepting the award for Best Video. When the EMAs were aired in North America the joint smoking was edited out.

Elizabeth Vargas goes into rehab.
“20/20’s” Elizabeth Vargas has checked into a rehabilitation facility for alcohol abuse. In a statement to People she talked about her realization that she was becoming more dependent on alcohol, and said, “I am in treatment and am so thankful for the love and support of my family, friends and colleagues at ABC News. Like so many others, I will deal with this challenge one day at a time. If coming forward today gives one other person the courage to seek help, I’m grateful.” Soaps.com wishes Vargas all the best.

Jared Harris is married.
“Mad Men’s” Jared Harris married Allegra Riggio in Miami on Saturday November 9. Riggio took to Twitter to announce the wedding news and posted a photo of the happy newlyweds…and her wings. Yes, wings! Check it out:

Kate Upton to join Entourage?
Sports Illustrated swimsuit model Kate Upton is reportedly in talks to join the cast of the new upcoming “Entourage” movie. Upton has previously made appearances in “Tower Heist” and “The Three Stooges.” Watch the video clip below for more.

Mark Wahlberg’s reality show.
Mark Wahlberg (“Boogie Nights,” “The Fighter”) and family members, including his mother and brothers Paul and New Kids On The Block’s Donnie, will star in a new A&E reality series based on their family-owned restaurant Wahlburgers. Wahlberg told media that this reality television series will not be like “Keeping Up With The Kardashians” as it will just be focused on the building of the family business.

Charlie Sheen selling Brooke Mueller’s house.
Who knew that Charlie Sheen (“Anger Management,” “Two And A Half Men”) lives in the same gated community as ex-wives Brooke Mueller (“Strictly Sexual”) and Denise Richards (“Twisted,” “Starship Troopers”)? It’s true. However, Sheen, who is in the middle of a custody battle with Mueller over their twin sons, Bob and Max, wants her out of the neighborhood. TMZ reported that Sheen, who owns the home Mueller lives in, has put it on the market for $4.8 million.

Jon Gosselin returning to TV.
"Jon & Kate Plus 8's" Jon Gosselin is back in Los Angeles to shoot another reality TV series. He and girlfriend Liz Janetta will be appearing on the fourth season of "Couples Therapy." This will mark Gosselin's first return to the small screen since the show that made him famous ended back in 2011.

Alec Baldwin's stalker jailed.
Genevieve Sabourin, who was in court this week to face charges of allegedly stalking actor Alec Baldwin ("30 Rock," "The Departed"), was ordered to spend 30 days in jail after she made the judge in the case angry. TMZ reported that Sabourin repeatedly yelled at Baldwin while he was giving testimony so the judge held her in contempt of court.

Rodney Atkins is married.
Country singer Rodney Atkins married singer-songwriter, Rose Falcon, on Captiva Island in Florida on Sunday November 10. Atkins' son Elijah was the best man. According to People, the wedding party and about twenty guests also celebrated the 51st anniversary of Atkins' parents during the wedding.

Justin Bieber leaves stage in Argentina.
Justin Bieber was seen leaving a Brazilian brothel last week during his concert tour, and this week the singing star was back in the headlines, this time for leaving the stage partway through his concert in Argentina. The disappointed Buenos Aires crowd jeered as he walked off after about an hour of performing on Sunday November 10. Bieber apparently had food poisoning and had gone ahead with the show against doctor's orders so as not to let his fans down. He had tweeted about his illness before the show:

Not feeling so good. Actually pretty sick. Pulling it together. Argentina we got a show to do. Love u.

Mariah Carey speaks out about American Idol.
Singing superstar Mariah Carey ("The Butler," "Glitter") talked about her time as a judge on American Idol in a recent Hot 97 radio interview, saying her time on the reality singing competition was 'disappointing'. Carey, who thought the panel would include just three judges, and whose clashes with Nicki Minaj were well-documented, said the experience 'was like going to work every day in hell with Satan'. After making that statement she laughed and backpedaled somewhat. Carey recently released a new song, The Art Of Letting Go.

Find out the latest on Prospect Park suing ABC. Check out Soaps.com's Primetime Dish to find out details on Matthew Perry's guest role on Cougar Town.