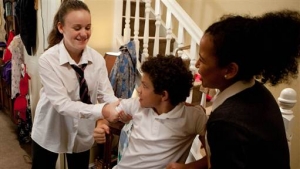 Alfie and Kat get together. (BBC)

David goes too far on “Coronation Street.” Phil finds out what happened to Shirley on “EastEnders.” Declan tries to rip off Katie on “Emmerdale.” It looks like the wedding could be cancelled on “Hollyoaks.” Chris gets a job at the diner on “Home and Away.” And Toadie and Sonya cobble together a platform for Karl on “Neighbours.”

Coronation Street:
Spoiler alert: Steve’s return to school is not going swimmingly. While Michelle urges him to make some friends, Streetcars is left in Todd’s hands and he soon begins to get devious. Across the street, things continue to go downhill for Brian and Julie. It looks like they could be headed for the end. And things get even closer to the end for Hayley.

Leanne realizes that her life won’t be back to normal for a long time. Peter only makes things worse. If dealing with the latest from Nick wasn’t enough, things are not looking up with Simon either. Meanwhile, Anna continues to worry that something might be seriously askew about Grace. The little girl is busy pushing Faye to the darkside. After the little girls pull some more pranks on Mary, they get up to something more serious. Soon, Anna is appalled and Leanne is furious.

Antony Cotton (Sean) has taken home the Entertainer of the Year trophy at the annual Stonewall awards in recognition of his decade long portrayal of an openly gay character.

EastEnders:
Spoiler alert: Denise and Ian could be headed for dumpsville when she gets wise about the lies he’s been telling. Her week gets worse when Tina turns up and starts stirring up trouble. Meanwhile, Lauren’s week is even worse. She gets close to breaking down and ends up falling into Jake’s arms. It’s not long before they are sharing some dark secrets. Lauren soon stumbles on something even more horrible and it could ruin Jake’s life.

Alfie’s stag doesn’t go exactly as he was expecting. After a long talk about his exes, he winds up on Kate’s doorstep with something to tell her that will have a big impact on their lives. Ronnie isn’t crazy about what is going on between them and tells Roxy about it. They get into a big argument. Roxy freaks out and then nearly explodes when someone unexpected pops up for the wedding.

Emmerdale:
Spoiler alert: A massive outbreak of speed dating hits the village but it's not the only odd thing to happen. Marlon thinks that Rhona is on drugs when she starts acting strangely. She refuses to get any help for it. Paddy worries as she gets worse. Meanwhile, Bernice is shocked and repulsed to learn that Rodney is escorting again. He won't be dissuaded and decides to ratchet up his profession, all the while insisting to Georgia that he's been faithful.

While Sam is making Charity suspicious, she's soon distracted by something else. She finds out what Jai has been keeping secret and confronts him along with Rachel. He begs and pleads to save his marriage but Charity is not feeling charitable. She decides to make him pay for what he did. And Ashley learns that if he really wants to be vicar again, he's got a fight ahead of him.

Hollyoaks:
Spoiler alert: Joe and Lindsey throw a joint stag and hen night at the Dog in the Pond. Things are a little off kilter. Since her parents can't make it to the wedding, she asks Freddie to walk her down the aisle, clueless that he is infatuated with her. Things get rowdy when Ziggy starts to strip but the atmosphere is soon ruined. After receiving a tip that he was involved in DS Trent's murder, Sam calls in some cops to help her arrest Joe. Soon there is DNA evidence linking him to the crime.

Take a peek at this video to see what else is ahead on "Hollyoaks."

Home and Away:
Spoiler alert: Ms. Montgomery is furious when she learns that Bianca has made a complaint against her. She's quick to retaliate as Bianca is forced to wait for the department to decide what to do about the whole mess. Meanwhile, Tamara gets busy with a plan to bring the students of Summer Bay and Mangrove River together. She thinks a concert should do the trick and Kyle is there to help.

Oscar starts to worry when he realizes that Matt has designs on Evelyn. He's sure this won't end well. Things may not end well for Maddy and Josh either. They just got back together but Andy might already be in the way. And there could also be a problem between Zac and Hannah after she invites Nate along for dinner.

Neighbours:
Spoiler alert: While Lauren is struggling with a secret, Susan is left pondering the less than totally attractive offer that Paul gives her. As she weighs the pros and cons of taking his money to fund the radio station, Mason decides it's time for him to move out. He wants to take Rhiannon and Jackson with him, but they aren't keen on the idea and he's left alone.

Kate tells Kyle how she really feels about him. They spend the night together but Kate is left wondering how much he actually cares. Gem discovers that they did the deed and starts spreading the news. While she gets busy having Bailey moved out of her class, Kyle and Georgie finally decide that they are going to move into number 24 together.

This week, it's Jackie Woodburne (Susan) and Calen Mackenzie's (Bailey) turn to answer some questions from the fans. Watch the video find out what they had to say.

Burning up about what's been going down on your favorite soaps? Be sure to cast your vote in Soaps.com weekly Soap Opera Polls. And then discover what happened when Heather announced that Franco was her son on General Hospital.

‘Monday’ Review: Sebastian Stan and Denise Gough in an Indie Drama of Love and Other Drugs

Billy Eichner, Who Joked About Colton Underwood Being Gay On ‘The Bachelor’ In 2019, Posts His Support After Today’s Reveal