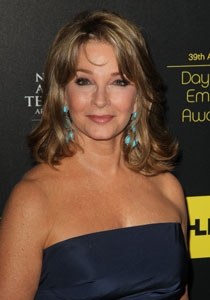 It’s never a dull moment on or off the set for the soaps stars of Genoa City, Salem, LA, and Port Charles. Find out every detail weekly in Soaps.com’s soap opera news rooms.

The Bold And The Beautiful:
The White House made an announcement about President Barack Obama and “B&B” producer Colleen Bradley Bell. Former “B&B” castmates, Bobbie Eakes (ex-Macy, ex-Krystal, “All My Children”) and Jeff Trachta (ex-Thorne) will soon reunite on stage. Do you recall the reason Storm (Ethan Wayne) left LA back in the 80s? Vote about his storyline in our Thursday Throwback poll and read Candace’s blog, “B&B” Breakdown, for her thoughts on Bill’s about face in Soaps.com’s The Bold And The Beautiful News Room.

Days of our Lives:
Deidre Hall (Marlena) has something personal for fans that will also benefit the Wounded Warrior Project. A “Days” co-executive producer dropped hints about how the transition of Chandler Massey to Guy Wilson in the role of Will is going to play out on screen. Find out when Wilson will first appear. A former Salem resident has been cast in the lead role alongside Lauren Ambrose (“Six Feet Under”) in a new Lifetime series. There was happy baby news for one of the actresses who once played Belle, while “Days” is celebrating a big milestone. Then, vote about how Eugene Bradford (John de Lancie) disrupted Roman (Wayne Northrop) and Marlena’s 1983 wedding in Soaps.com’s Days of our Lives News Room, and even read Chrissi’s thoughts about the big church reveal in Deconstructing “DOOL!”

General Hospital:
Get a peek at what’s to come in a Port Charles sweeps video. Bradford Anderson (Damian Spinelli) has an upcoming guest role in a hit Primetime show. Rebecca Herbst (Elizabeth) has recruited co-stars Teresa Castillo (Sabrina), Jason Thompson (Patrick) and Tyler Christopher (Nikolas) to join her in a walk to end epilepsy. Fan favorite Rick Springfield (ex-Dr. Noah Drake) showed up on the small screen to sing something special to a Daytime host. Reminisce about how Cesar Faison (Anders Hove) was first introduced to Port Charles in 1990 in the Throwback Thursday Poll, and see if you agree with what Vi had to say about Luke and Tracy’s love in her weekly “GH” Rundown, all in the General Hospital News Room.

The Young And The Restless:
Get a sneak peak at what special moments “Y&R” has planned for Veteran’s Day in Genoa City. Michael Graziadei (ex-Daniel) has been cast in a new futuristic thriller pilot for Lifetime. Get a glimpse at the actors’ best tweets, and vote about who you think hit Delia. Find out how you can join Kate Linder (Esther) for high tea in Toronto. Do you remember how Lauren (Tracy Bregman) helped Kevin (Greg Rikaart) when he first came to town? Vote your answer in our Throwback Thursday Poll, then read Candace’s weekly Restless Rant for her take on the drama in The Young And The Restless News Room.

Is All My Children being shelved like One Life To Live? Read all of our news, including the latest about the online soaps, as well as celebrity and Primetime scoops.