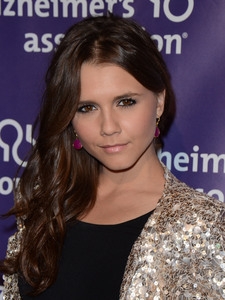 Soaps.com has a big Lifetime cancellation for the week of November 11, as well as episode teasers, casting, a holiday original movie, a former soap star in an ABC hit series and more in our latest Primetime Dish column…

American Horror Story:
Renewed! FX has announced that it will bring viewers more of its hit series, which has been renewed for season four. For now tune in for the third installment, “Coven,” Wednesdays at 10:00 PM.

Bad Teacher:
Colin Egglesfield (ex-Josh, “All My Children”) will appear on the new CBS sitcom sometime in 2014. The actor tweeted an Instagram photo, along with Sara Rodier (who will play Lily), from the set.

Beauty And The Beast:
Something goes horribly wrong in the CW’s November 11 9:00 PM episode titled “Father Knows Best.” Monday episode teasers: Cat faces her birth father and wonders about the mysterious role he’s played in her life, and Vincent has to neutralize a high-profile beast and rescues Tori (Amber Skye Noyes, “One Life To Live’s” Michelle).

Castle:
TVLine is reporting that Alexandra Chando (“The Lying Game,” “As The World Turns'” ex-Maddie) will appear in December’s episode eleven as a Lindsay Lohan/Miley Cyrus type character who has experienced a major public breakdown. Tune in to ABC Mondays at 10:00 PM.

Catch A Christmas Star:
The Hallmark Channel original holiday movie will air on Sunday November 17 at 8:00 PM. A widower’s two precious kids help him reconnect with his high school sweetheart, who is one of the biggest pop stars around. Steve Byers (“Alphas”) and Shannon Elizabeth (“American Pie” films) star.

Glee:
Read our Glee Spoilers to find out who tries to stop the dance craze in FOX’s Thursday November 14 9:00 PM episode titled “The End Of Twerk.” Watch for the recap after the show airs.

Grey’s Anatomy:
Read our Grey’s Anatomy Spoilers to find out who reveals a secret to Callie in ABC’s Thursday November 14 9:00 PM episode titled “Sorry Seems To Be The Hardest Word.” Soaps.com posts recaps weekly after the show airs.

Hart Of Dixie:
It’s all about being supportive in the CW’s November 11 8:00 PM episode titled “Family Tradition.” Monday episode teasers: Zoe and Joel find the perfect place to live and are surprised to learn it’s owned by one of her relatives. Lemon receives an offer that she may not be able to refuse. Lavon wonders why AnnaBeth is so eager for him to go out of town, and George is reluctant to make a move on Lynly.

Homeland:
Vincent Irizarry (David, “All My Children”) will guest star on the Showtime series as Caption Lonza. Irizarry will be in scenes with Carrie (Claire Danes) and Quinn (Rupert Friend) on Sunday November 10 at 9:00 PM.

NCIS:
Emily Wickersham has been cast as a series regular and will first appear on November 19 as NSA Analyst Eleanor ‘Ellie’ Bishop. “Emily Wickersham’s Ellie Bishop is proving to perfectly compliment the ‘NCIS’ team,” said Executive Producer Gary Glasberg. “Her energy and enthusiasm is contagious. Great things are planned for Bishop and we couldn’t be more thrilled to have her on board.” Tune in to CBS Tuesdays at 8:00 PM.

Ravenswood:
In ABC Family’s Tuesday November 12 8:00 PM episode titled “The Devil Has A Face,” a relative of Caleb’s might be able to explain some things to him. Luke looks for a distraction, and Miranda and Olivia uncover a connection between their families.

Reign:
In the CW’s Thursday November 14 9:00 PM episode titled “A Chill In The Air,” Francis’ ex-lover Olivia appears and brings the dangers of the woods with her. Mary turns to Bash for comfort, and Queen Catherine forces Aylee to spy on Mary.

Sleepy Hollow:
David Fonteno, who plays Judge Robert Parks on CBS' "The Good Wife," will guest star as Reverend Boland in the FOX series. Look for Fonteno in episode nine and ten and tune in Fridays at 9:00 PM.

Supernatural:
In the CW's Tuesday November 12 9:00 PM episode titled "Heaven Can't Wait," Castiel gets a job and starts to enjoy life as a human. Dean is asked to help investigate some disappearances, and Crowley agrees to help Sam and Kevin in exchange for one phone call to hell.

The Carrie Diaries:
In the CW's Friday November 15 8:00 PM episode titled "Borderline," Carrie's job is on the line when her interview with a New York playwright named Adam Weaver becomes difficult. Walt is forced to acknowledge his real feelings. Carrie and Dorrit don't like Deb's son Dylan, and Sebastian looks for comfort in the arms of someone new.

The Client List:
Canceled. Lifetime has canceled its series, which will not be back for season three. The series starred Jennifer Love Hewitt (Riley) and "All My Children" alum Colin Egglesfield (Evan).

The Following:
Jacinda Barrett ("Zero Hour," "Suits") has been cast in the recurring role of Julia. Season two premieres at 9:00 PM on Monday January 20, 2014 on FOX.

The Good Wife:
Jordana Spiro ("The Mob Doctor") will appear as a police detective named Jenna. Tune in for CBS' 100th episode and her first appearance on Sunday December 1 at 9:00 PM. Spiro's role could very well be recurring.

The Originals:
It's a blast from the past in the CW's November 12 8:00 PM episode titled "Bloodletting." Tuesday episode teasers: Klaus has a very unexpected encounter, and Rebekah is torn by Marcel's offer. Read more of The Originals Spoilers. In casting news… Michael Trevino, who plays "The Vampire Diaries'" Tyler, will cross over to New Orleans with his Mystic Falls character in late November/early December.

The Tomorrow People:
In the CW's Wednesday November 13 9:00 PM episode titled "Sorry For Your Loss," Stephen and Russell run into a potential new break-out and report back to John. Russell's dad passes away, and Jedikiah's shocking secret could destroy his career.

Witches Of East End:
On Lifetime's Sunday November 10 10:00 PM episode titled "Potentia Noctis," Ingrid flashes back to one of her former lives, and Freya comes across something shocking at Fair Haven.

Read Soaps.com's After The Soap Finales: Where Are They Now for details on (ex-Casey, "As The World Turns") Billy Magnussen in The Money, along with other career updates of former soap stars.