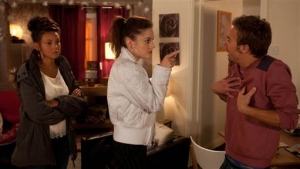 Jane’s funeral forces Roy to reconsider Hayley’s request on “Coronation Street.” Kirsty does something desperate to pay off her debts on “EastEnders.” Amelia decides to enter the Little Miss Yorkshire pageant on “Emmerdale.” Diane uncovers damning evidence on “Hollyoaks.” Maddy annoys Josh when she tries too hard to help him on “Home and Away.” And Karl notices that, in spite of running for mayor, he doesn’t actually have a platform on “Neighbours.”

Coronation Street:
Spoiler alert: After discovering that Simon has been acting out and stealing, Leanne goes looking for some answers. Owen suspects that Grace is the one behind the little boy’s bad behavior. Leanne runs off to rail at Peter for not paying enough attention to his son. He can’t really argue with that. Carla suggests that they ask Tina to help look after the kid. She’s reluctant but agrees and Peter is quickly impressed by how good she is with his son.

David continues on his downward spiral. Even though he’s nearly broke, he resorts to drinking away the few dollars he has, much to flatmate Tina’s chagrin. But Kylie reacts even more furiously when she hears that he’s been taking money out of their joint account. She shows up to scream at him.

Chris Gascoyne (Peter) has announced that he will be leaving Weatherfield next year so that he can spend more time with his family. His departure is sure to be dramatic and will coincide with that of Michelle Keegan (Tina).

EastEnders:
Spoiler alert: When he isn’t able to get Ian to come clean, David looks for other options. Carl is also desperate to get Ian to speak up at Max’s trial but that seems to be a dead end. Max and Phil decide it’s time to get revenge on Carl for hanging them out to dry. While Phil gets a shock when he hears what Carl has to say for himself, Max worries that his family won’t accept him back into the fold.

Seeing how distraught Carol has been, Masood asks her to move in with him. She’s not sure about that plan. David shows up to win back her trust, but that likely won’t be enough to distance her from Masood. Across the square, Sam starts to feel boxed in by life with his family and contemplates taking off. When he doesn’t bother showing up for Ava’s birthday, she and Dexter worry that he must have run off from Walford.

Emmerdale:
Spoiler alert: After being released, Amy knows she needs to make a choice between Andy and Kyle. Kerry catches her selling a stolen necklace and figures out she wants to get Kyle back. She offers to help them get out of town. Before that can happen, Pollard, Val and Andy discover that Amy has abducted Kyle and chase her down to the docks. Val lashes out at Kerry but Amy gets away on the ferry as the cops arrive. Across the village, David is heartbroken when he thinks that Priya has had an abortion, but she's been having second thoughts and things could be far from settled.

Marlon tries to shield Laurel from what's coming but she soon discovers that she is being charged with assault and could be headed for prison. Marlon blames all of this on Rhona. He encourages Laurel to lie to the cops for a lighter sentence. Meanwhile, Rhona and Paddy continue to have intimacy issues. And Ashley randomly finds £50 and thinks that it's a gift from Jesus.
​
Katherine Dow Blyton (ex-Sally, "Hollyoaks") is heading to "Emmerdale." She will be joining the cast as the village's new vicar. Look for her to make her first appearance in November. She previously did a guest spot on the series, playing a doctor back in 1996.

Hollyoaks:
Spoiler alert: Cindy, Lindsey and Mercedes have to deal with their demons as things get grim for them. Freddie is also facing danger as he gets dragged into events beyond his control. Meanwhile, Finn and Robbie prepare to cause some damage as they plot on John Paul. Patrick manages to stumble onto their scheme. As he wonders what to do about it, Trevor is busy making a tough deal that could wind up saving one of the villagers.

George tries to stop Phoebe and Vincent, but the damage could already be done. She's traumatized by her mother's nasty behavior and wants to run. George teams up with Tilly and Esther to track down Phoebe and Vincent after they take off for Ireland. Meanwhile, Tony is left shaken after he gets a disturbing message. He's forced to try and cut a deal.

Take a peek at the action packed trailer for the final face-off between brothers Will and Dodger on "Hollyoaks."

Home and Away:
Spoiler alert: Sasha doesn't know what to do after Sid tells her she can't remain in the Bay on her own. Spencer looks for a way out of this problem for her. He'll have to think fast since the Walkers are ready to leave and Sasha may have to go with them. Meanwhile, on the eve of their wedding, April and Dex wonder why they are really going ahead with it. By the next day, that question becomes even more pressing and it looks like she might not make it down the aisle.

Still confused about her real feelings, Tamara continues to pretend that she's with Casey. Not that he notices much since he's busy competing with Heath for who will take over the gym. Finally, Indi actually decides who will be running it. Elsewhere, Zac and Hannah are also confused about their feelings. They aren't sure they can reconcile them with looking out for the twins. And Brax has a visit from Ricky and Kyle. This really exhausts them, but Kyle still finds the energy to worry about why Nate is so interested in Ricky.

Neighbours:
Spoiler alert: Kyle decides that popping the question to Georgia is not as good an idea as he had originally thought. After she encourages Bailey to take a trip to China, she has a proposition of her own for Kyle. He's also feeling some pressure from Sheila, who is not thrilled after he refuses to have an engagement party. Sheila manages to convince Amber that becoming a meter maid would actually be good for her, in spite of the fact that Terese has hired Amber to be the Lassiters' photographer. In the midst of all of this busyness, Josh and Amber keep trying to get themselves back on track.

Toadie guesses that something is off about Gem. She's not in a good mood and starts lashing out, getting into a conflict with Imogen. This eventually leads to Gem threatening her. She still finds the time to keep fueling Bailey's crush on her, something that keeps Toadie on edge.

Fans can catch a few spoilers in this behind-the-scenes video of Harley Bonner (Josh Willis) shooting a scene with Jenna Rosenow (Amber).

Pipe up and let your feelings out about what's been happening on your favorite soaps. Be sure to cast your vote in Soaps.com weekly Soap Opera Polls. And then take a trip to the past in our latest edition of Soap History: Return To Peyton Place.