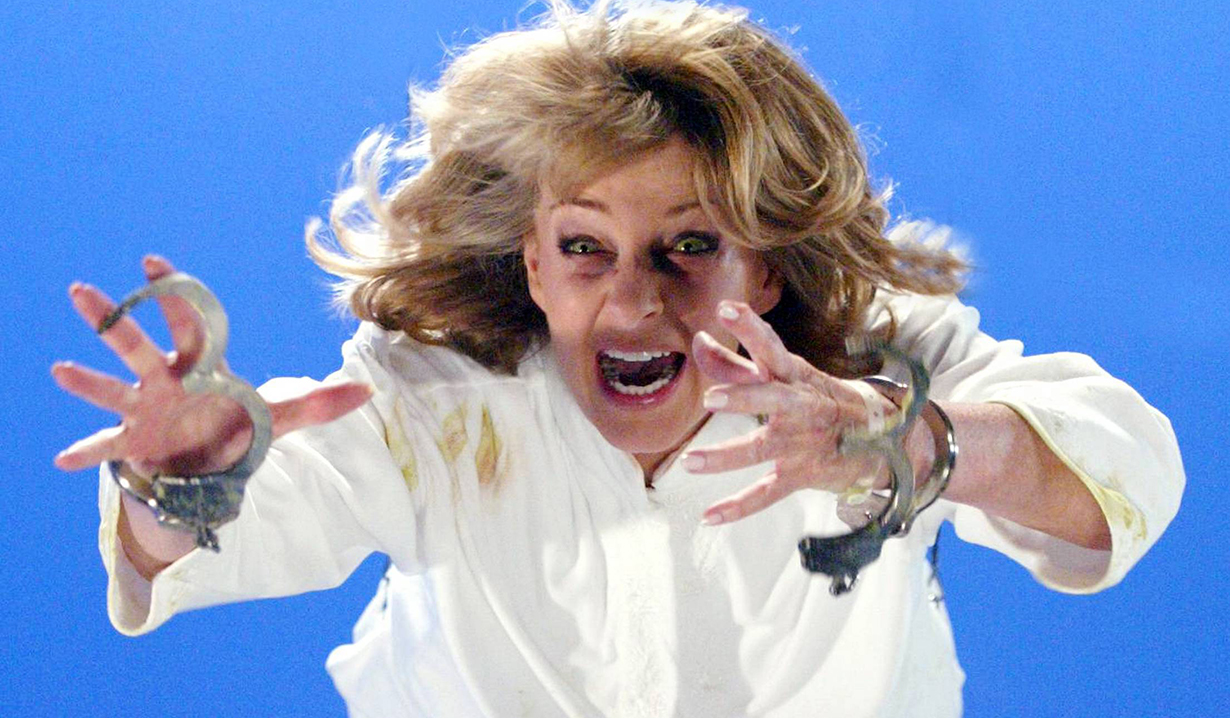 Soaps aren’t just about steamy and romantic moments, we’ve seen some pretty crazy and psychotic ones, and today we’re reminiscing about the crazy. The stuff nightmares are made of. 20. Sheridan captive in the pit on Passions

If “The Silence of the Lambs” were to meet “The Crying Game” you might come up with something like what happened in Beth Wallace’s (Kelli McCarty) basement in Harmony. With the help of Charlie (Jordan Baker), Beth kept a pregnant Sheridan in a pit in her basement just so she could steal her baby to pass it off as her own. Charlie split town after it was over, but it turned out that Charlie was really Alistair Crane (Bill Dempsey-body/Alan Oppenheimer-voice) – Sheridan’s own daddy – dressed as a woman.

19. Vivian burying Carly alive on Days of our Lives

Back in 1993, Vivian (Louise Sorel) became obsessed with her grandnephew Nicholas (Erik von Detten), so she decided the best thing to do would be to stage his mother Carly’s (Crystal Chappell) death and then bury her alive to get her out of the picture. And she did it too, with an elaborate coffin setup with air tanks and a speaker so Vivian could keep her abreast of life above ground. Carly was eventually rescued by Lawrence (Michael Sabatino), but not before she had slipped into a coma.

18. Greg Madden buried alive on All My Children

Yes, another buried alive plot, but it has been a reliable and fearsome plot device since the days of Edgar Allan Poe. This one makes the list because Greg (Ian Buchanan) actually died because of it. Tad (Michael E. Knight) stuck Greg in a coffin with a speaker and microphone in order to torture information out of him about Emma (Lucy Merriam). His plan backfired when an earthquake hit Pine Valley and Greg’s coffin caved in on him, crushing him. The scariest part was the autopsy, when it was revealed how desperate he had been to escape his coffin, with splinters embedded in his nails and sores he had developed from lying in his own waste. Horrifying, especially for daytime television.

17. Allison Perkins’ return on One Life To Live

We can’t stop thinking about that totally-terrifying scream Natalie (Melissa Archer) let loose when she found her one-time kidnapper and all-around psycho Allison Perkins (Barbara Garrick) hovering over her father Clint (Jerry verDorn) in the Llanview hospital with a syringe. If this was the last time we got to see these characters, we felt it was certainly on a chilling – and ear-piercing – note.

Mary Bishop (Catherine Wadkins) was a suicidal widow who made an amnesiac Nikolas (Tyler Christopher) believe they were husband and wife, all while commiserating with his fiancée Emily (Natalia Livingston) over their lost loves. She had some serious issues. Mary eventually snapped and hunted Emily at the Quartermaine estate, killing anyone she came across, including Sage Alcazar (Katie Stewart) and Trent Parker (Trent Cameron). While she and Emily struggled over a butcher knife, Emily ripped off the mask to a shocking reveal. Mary died in the hospital, but not before assuring Emily she would never be happy.

15. Adam’s return from the dead on As The World Turns

In 2007, Adam (Matt Cavenaugh) was presumed dead after a serious conk to the head by Maddie (Alexandra Chando) with a tree limb while he was attempting to rape Gwen (Jennifer Landon). In true soap fashion, Adam was not dead at all, but in hiding, and sending anonymous packages to Gwen. Adam finally went into attack mode while Gwen and Maddie were trying to unwind in an old, secluded cabin. He bashed Maddie in the head with a tree limb – tit for tat – and tried to rape Gwen yet again. He was stopped by his brothers Will (Jesse Soffer) and Casey (Billy Magnussen), but before they arrived the scene in the cabin was pretty dicey. It was truly a frightening scene we’ve never forgotten.

14. Carly’s funhouse kidnapping on As The World Turns

When Oakdale’s Jack (Michael Park) found Carly (Maura West), she not only popped out of a coffin – complete with fog machine effects – but she was old. Jack promised her he would love her no matter what she looked like, but that didn’t stop her blood-curdling screams when she saw herself in the cringe-inducing hall of mirrors as he tried to sneak her past.

Before things got otherworldly-weird in Port Charles, we were still totally creeped out by this string of murders in the hospital based on a novel penned by Dr. Kevin Collins (Jon Lindstrom). One of the more memorable deaths was of a strangled nurse dressed as a clown during a circus celebration for sick children. Not fun.

12. The Salem Strangler on Days of our Lives

Back in the early 80s, Salem was terrorized by a strangler who ended up being Jake Kositchek (Jack Coleman), a man devastated when the woman he was to marry had a split personality, and her prostitute identity ditched him at the altar. Ouch. He snapped and killed Samantha Evans (Andrea Hall-Lovell) although his target was really Marlena (Deidre Hall). He almost killed Renee DuMonde (Philece Sampler) too, but she escaped and Jack died before facing his charges in court.

When serial kill Ryan (Jon Lindstrom) came to Port Charles, it was to follow Felicia, who had witnessed him commit a murder, but traumatized, she had blocked out those memories. That left Ryan open to terrorize and stalk her before he was locked up in a mental institution. When his twin brother Kevin arrived in town some time later, Felicia (Kristina Wagner) brought the stalking charges against him instead.

10. Project Orpheus on All My Children

There weren’t many lines Dr. David Hayward (Vincent Irizarry) wouldn’t cross, and that included extreme experiments on patients that brought them back from the dead. Greenlee got her hopes up that Leo was one of the lab rats after she was saved by David, but it wasn’t to be. He did however manage to bring back from the dead Maria Santos (Eva La Rue), Dixie Martin (Cady McClain), Zach Slater (Thorsten Kaye) and Stuart Chandler (David Canary). Viewers were left wondering who else would be revived, but the storyline ended with the first finale.

9. The Black and White Ball murders on General Hospital

When Nikolas decided to throw a big bash at Wyndemere, he didn’t mean for the Text Message Killer to be a featured guest. Emily was hesitant because of Nikolas’ growing number of outbursts, but the ball happened on Halloween anyway. Nikolas asked Emily to marry him, but their joy was short-lived as a storm stranded the guests on Spoon Island with no electricity. The killer, who turned out to be Diego Alcazar (Ignacio Serricchio), began a murderous spree and even strangled beloved Emily.

8. The Salem Stalker on Days of our Lives

“Days” is always good for a prolonged murder mystery, and this one picked off Salem residents left and right. And these weren’t last-in, first-out cuts. These characters were beloved! Abe Carver (James Reynolds), Alice Horton (Francis Reid), Tony DiMera (Thaao Penghlis), Roman Brady (Josh Taylor), Maggie Horton (Suzanne Rogers), Cassie Brady (Alexis Thorpe), Jack Deveraux (Matthew Ashford), Caroline Brady (Peggy McCay), and Doug Williams (Bill Hayes) all met their demise at the hands of the stalker. It turned out Marlena was the culprit, but viewers got a big payoff at the end of it all when everyone was reunited – alive –on Melaswen Island, which Andre DiMera was running.

From the slightly campy Stephen Clay (Michael Easton) Experience to Caleb Morley’s (Easton) dark reign over the unholy, blood-sucking vampires crossed decades and soap operas to terrorize the people of Port Charles, especially the resident slayer Lucy Coe (Lynn Herring). And while viewers were left believing it wasn’t vamps at all but the workings of a psycho, there is always room for another plot twist.

More: A history of Dark Shadows, a supernatural soap 6. The Vincent/Valerie blackmailer on Passions

When the long-lost son of Julian Crane (Ben Masters) and Eve Russell (Tracey Ross) showed up, things got even weirder in Harmony. Vincent terrorized his family as “The Blackmailer,” raping his half-sister Fancy (Emily Harper), stealing semen from a drugged Louis (Galen Gering), and then raping Fancy again, impregnating her with the purloined sperm. Vincent was eventually revealed to be a hermaphrodite and was institutionalized – but not before having another incestuous relationship with his uncle Chad (Charles Divins). Yeah that’s not creepy…

5. The Salem Slasher on Days of our Lives

Another murder mystery in Salem happened when the Slasher started his murdering spree, picking off Trista Evans (Barbara Crampton), Daisy (Yvonne Zima), and a few others. It ended up that the murderer was really Andre (Thaao Penghlis), Tony Dimera’s (Penghlis) cousin, who had plastic surgery at Stefano’s (Joseph Mascolo) bidding to look like Tony. Of course, he wore a Roman (Wayne Northrop) mask when he committed the crimes, confusing things more.

It may be easy to write off “Dark Shadows” as campy, but the atmospheric mood music, black and white episodes and dilapidated residences with spider webs and dust-covered furniture really set the scene for eerie happenings. About a year into the premiere of the show vampires came on the scene when Barnabas Collins (Jonathan Frid) was finally released from his coffin by groundskeeper Willie Loomis (John Karlin) in one of the scariest scenes in soap history. Readily available online and on Decades TV it is a classic fright fest.

Viewers were expecting total terror after the number of promos the network aired before the storyline began, and they weren’t disappointed. Many of the show’s main characters found themselves stranded on an island with a mask-wearing serial killer. Luckily, it was mainly minor characters who met their end, except the beloved Mark Wolper (Nick Stabile), who managed to reveal the killer to be widower Ben (Clive Robertson) before he took his last breath. No worries – Ben’s psycho twin Derek (Clive Robertson) took up the terrorizing mantle for the rest of the show’s run.

2. The Corinth murders on Loving

Want your cancelled soap to go out with a bang? Just kill off most of the cast in a murderous rampage! Even though it was the show’s last major storyline, it was also considered one of the best. Clay (Dennis Parlato), Stacey (Lauren-Marie Taylor), Cabot (Wesley Addy), Curtis (Michael Lord), and Isabelle (Meg Mundy) all lost their lives to the serial killer, who ended up being an insane Gwyn (Christine Tudor-Newman) who felt she was only easing her victims’ pain. She poisoned herself, and the rest of the Corinth cast headed to New York and “The City.” This storyline caused more than a few nightmares when it ran its course in 1995, and remains one of the most infamous in the show’s history. Drugged by Stefano, Marlena was open to possession by the devil, complete with exorcism, levitation and green glowing eyes. By the time the storyline wrapped up six months later, more than a few kids watching with their moms were scarred for life.

There were just too many cringe-worthy storylines to include in one list. Post in the comments if you recall any other creepy storylines worth mentioning.