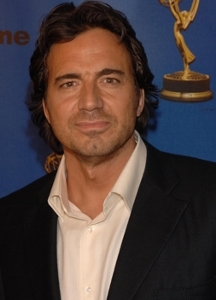 Casting news in October included some big name returns to Daytime, some reality TV personality appearances, and some farewells. Get the details below:

All My Children:
Check out Soaps.com’s All My Children season one finale recap: Fill The Void, and stay tuned for the season two return date and further casting news.

The Bold And The Beautiful:
It was announced in October that “B&B” would be recasting the role of RJ Forrester, previously played by Ridge Perkett. They are seeking a young actor to play the 10 year-old character, who will be returning home from a European boarding school. Also, Dick Christie debuted as security guard Charlie Perkins, who will be a new love interest for Pam (Abby Mills), newcomer Ashlyn Pearce was cast as Thorne’s (Winsor Harmon) daughter, Aly, who will appear in November, and “OMG! Insider” host, Thea Andrews made a few more appearances. Viewers saw Andrew Collins on as Jarrett, Zane Achor as Baby Will, and CBS reality TV personalities, “Big Brother’s” Rachel Reilly, Brendon Villegas, Howard Overby, Elissa Reilly, and Jeff Schroeder and Malcolm Freberg from “Survivor” in some scenes at Bikini Bar. “RuPaul’s Drag Race” and “Toddlers & Tiaras” personality DJ ‘Shangela’ Pierce began appearing as Steve on October 31. “B&B” is still looking to cast the roles of Tom, a ladies’ man in the 40 – 50 year age range, and Karen Spencer, which is a recast for exiting actress, Joanna Johnson. The biggest casting news for the show was the recasting of main player, Ridge Forrester. Find out which soap opera veteran is replacing Ronn Moss in the role through The Bold and the Beautiful Comings & Goings.

Days of our Lives:
October brought the end of Chandler Massey’s run as Will Horton as the character left to attend Berkeley. When Will returns on November 14, he will be played by Guy Wilson. Casey Deidrick exited the role of Chad DiMera in October, and Nathan Owens will follow suit, departing his role of Cameron Davis in November. The show put out a casting call for a 17 to 18 year-old African-American, Hispanic, or East Indian teen to play sweet high-school senior, Mary Beth. Amanda Corday, Ken Corday’s daughter, began playing Karin the candy-striper. The Nick Fallon and Kristen DiMera look-a-likes “Days” cast are expected to show up during November Sweeps, and Eva Swan will be playing the Kristen look-a-like. Also returning for sweeps are Charles Shaughnessy and Patsy Pease as Shane and Kimberly Donovan. Looking ahead, Jadon Wells is returning in December to play Joey Johnson, and Mark Collier (ex-Mike Kasnoff, “As The World Turns”) has been cast as a new Salem character who will also debut that month. Drake Hogestyn is set to reappear as John Black. Find out when he will return to Salem through Days of our Lives Comings & Goings.

General Hospital:
The show put out a casting call for a five year-old blonde-haired, blue-eyed little girl to play an under-five role interacting with many cast members. Former "One Life To Live" actress, Ilene Kristen (ex-Roxanne) made an appearance on "General Hospital" in October, and it was announced that Jacklyn Zeman would be returning to Port Charles as Bobbie Spencer in November. Also making returns are Kin Shriner as Scotty Baldwin and Michael Saucedo who will reprise his former role of Juan Santiago. Read the details and refresh your memory on his character through General Hospital Comings & Goings.

The Young And The Restless:
"Y&R" put out a casting call in October for the role of Esmerelda, a young model who will be involved with Summer (Hunter Haley King), and is also seeking to cast Andrew Abbott, a never-before-seen cousin of the core family. Elizabeth Dennehy popped up as Laura in a scene with Alex (Ignacio Serricchio) and another ex-"Guiding Light" actor, Marshall Hilliard, debuted as Officer George. Sophie Pollono exited her role as Cordelia Abbott as the character was killed. Looking ahead to November, Myk Watford ("Law & Order: SVU") will debut as Womack, and Cynthia Watros ("Lost") will begin appearing as Kelly. Get more details on her Genoa City role and see a first look photo through The Young and the Restless Comings & Goings.

Check out Soaps.com's After The Soap Finales: Where Are They Now to watch a clip of soap opera veteran Stephen Schnetzer onstage in Tribe. Find out who becomes Coronation Street's Grace's target.