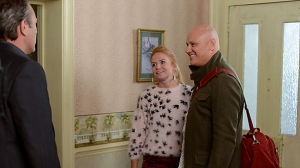 Steve gets himself into trouble on “Coronation Street.” Kirsty takes extreme action to pay back her loan shark on “EastEnders.” Rachel makes a shocking confession on “Emmerdale.” A hostage situation goes haywire on “Hollyoaks.” Can the kids have a normal life after being in the cult on “Home and Away?” And Sonya gets an online friend on “Neighbours.”

Coronation Street:
Spoiler alert: Eileen’s house is starting to feel crowded again now that Todd is back. Her son hasn’t been behaving himself it seems, though Todd does his best to shield his mother from this. He attempts manipulating Shawn into taking his side. But playing the innocent may not wash for long.

Dealing with Hayley’s condition and final wishes has Roy near collapse. He can’t hide his emotional turmoil from Anna as it bubbles over. Things continue to get worse for Hayley and she has to push Roy to face it. Meanwhile, Grace and Faye hatch a plot to ruin things for Sally. While Sally remains clueless about this, Owen is quick to catch on to what’s happening. Grace spreads her campaign of terror further and Mary becomes her target. This leads to Norris and Emily going on the defensive.

EastEnders:
Spoiler alert: Following the gruesome Halloween events, Joey is put off to arrive in the square and find it swarming with cops. Later, Lauren also runs into something unpleasant and unexpected. When she visits Max in prison, he has some bad news for her. The case is taking a toll on more people than Max though. Ian is feeling overwhelmed but that may not be enough to make him do the right thing.

Bianca heads home with a new man. After that shocks her family, she’s left with a hard choice to make. She wonders if she should convince David to leave for Carol’s sake. Masood is still not happy to have David around. He wishes he’d get lost in spite of how often Carol insists that having him around is no big deal. Meanwhile, David isn’t exactly thrilled about having Terry around and decides to do whatever it takes to figure out what he really wants with his daughter.

Charlie Brooks (Janine) will be leaving “EastEnders” soon but it may not be forever. The character has come and gone numerous times over the years. Details about what this exit may mean for the character have not been released.

Emmerdale:
Spoiler alert: Jacob has run away, leaving Alicia and David in a panic. It’s not long before they are getting some unexpected help. They also get some unexpected news from Charity. Meanwhile, Gabby gets busy shocking Brenda with her outrageous behavior. Gabby runs around pulling pranks. Nicola is a target while Jimmy and Bernice also feel the effects of her mischief.

David’s week gets even more complicated thanks to a misunderstanding. Things settle down a little when Priya informs him that she is not actually pregnant. Across the village, Amy tries to make the peace with Joanie, but things don’t pan out, especially after Kerry gets between them. And Rodney decides that it’s time for him to go back to escorting but his choice is quickly revealed.

Hollyoaks:
Spoiler alert: Martha's suspicions about Will grow after she's told that he's been hiding his mother's locket. She tips Dodger and Dennis off about her theory that Will may have knocked off Anna. Will manages to eavesdrop on all of this and concocts a plan to escape the cops. He lures his enemies into the mansion he just inherited so that he can silence them. However, his hostage taking is interrupted when Sienna tracks them down. He manages to overpower her, but Dodger soon takes her place. Will begins threatening to kill the hostages and winds up in a one on one battle with Dodger on the rooftop that could leave one of them dead.

Take a trip back through 18 years of "Hollyoaks" history with original cast member Nick Pickard (Tony Hutchinson) in this video.

Home and Away:
Spoiler alert: John is still distraught about Jett and Nina going missing. As he searches for them, they manage to avoid him. She may have ruined whatever trust they had. They aren't the only ones with trust issues. Paranoia breaks out after there is a fire at the high school. Bianca is determined to find out who was responsible. Meanwhile, a wounded Andy Barrett stumbles back into the bay hoping that Heath, Nate and Ricky will be willing to help him.

Roo is annoyed when she thinks that everyone has given up on Harvey. Alf and Marilyn pressure her to open up to Harvey's daughter about the situation. Meanwhile, Sasha needs to open up to Spencer about her uncertainty where their future is concerned. They decide to take a break, but Chris soon complicates things by getting in the middle and acting like a busybody. And things are not looking good for Tamara and Casey on the romantic front either. They ponder whether or not it's time for them to end things.

Neighbours:
Spoiler alert: After getting a little closure from Kate, Chris turns around and decides that it's time that he change Hudson's mind. Meanwhile, Terese isn't sure what to do when Paul offers her the job she's been wanting for so long. He comes clean about what his real plans are – to become mayor.

Kyle gets some prodding from Sheila to show his commitment to Georgia. Sheila then gets busy trying to change things for Rhiannon, but she'll have some competition in that department from Susan. Even with a new look, Rhiannon still manages to clash with Matt. He's got other things on his mind, like the fact that Lauren seems to have feelings for him. However, Lauren's feelings for Brad also seem to be coming back. And Josie tries to impress Callum so much that her feelings seem to be getting contagious.

Find out what answers "Neighbours" stars Harley Bonner (Josh) and Jenna Rosenow (Amber) gave to their fans' questions by watching this video.

Let your feelings about the latest mayhem that's been happening on your favorite soaps out. Be sure to cast your vote in Soaps.com weekly Soap Opera Polls. And then discover how Liam confronted Quinn on The Bold And The Beautiful.