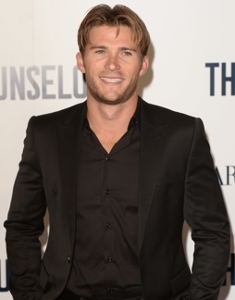 This week in the world of celebrities there is casting news, splits and new pairings, a peek at Jamie Dornan, the new Christian Grey, and much more…

Chris Brown arrested and in rehab.
Following rapper Chris Brown’s arrest on October 27 for allegedly punching a man in the nose at The W Hotel in Washington D.C., Brown’s representative announced that the performer, previously convicted of assaulting Rihanna, had decided to check into a rehabilitation facility to ‘gain focus and insight into his past and recent behavior’. Brown could be facing up to four years in jail.

Olivia Wilde is pregnant.
Actress Olivia Wilde (“Rush,” “The O.C.”) confirmed this past week that she is expecting her first child with her fiance, Jason Sudeikis (“Saturday Night Live”). Wilde tweeted thanks to her fans for their congratulations:

Jason Aldean’s tour bus hits and kills man.
Country singer Jason Aldean was left with a heavy heart after his tour bus, traveling on an Indiana interstate, struck and killed 49 year-old Albert Kennedy in the early hours of Monday October 28. Knox County Sheriff Michael Morris told media that the man was often seen walking that stretch of highway, and that he had stepped in front of the moving bus. Aldean posted his regrets on Twitter:

With a heavy heart, I'm sad to say that a man passed away last night after stepping out in front of my bus in Indian… http://t.co/Jgwz9Eojed

Miranda Kerr and Orlando Bloom split.
Celebrity couple Orlando Bloom (“Pirates Of The Caribbean,” “Lord Of The Rings”) and Victoria’s Secret model, Miranda Kerr, have decided to end their three year marriage. The pair, who has a two year-old son, Flynn, together, released a joint statement through their reps. “They have been amicably separated for the past few months. After six years together, they have recently decided to formalize their separation.”

Metallica gives Justin Bieber the thumbs up.
In somewhat surprising music news, Metallica’s frontman, James Hetfield, apparently told Kerrang! that they are, in fact, Beliebers. This follows the posting of a video on YouTube of Bieber covering Metallica’s “Fade To Black.” Drummer Lars Ulrich and bassist Robert Trujillo backed Hetfield up, sort of. Ulrich alluded to having respect for Bieber’s talent and what he’s gone through at an early age, and was pleased that Bieber is a fan. Trujillo warned that he would be a Belieber as long as Bieber ‘stays out of trouble’.

Channing Tatum planning reality series.
People reported that Channing Tatum ("Magic Mike," "Step Up") is working on a new reality series with A&E which would surround his restaurant/bar Saints & Sinners on Bourbon Street in New Orleans. There was no word on whether Tatum would actually appear on the show.

Kerry Washington pregnant.
A source close to "Scandal" actress Kerry Washington confirmed to People that she is expecting her first child with husband Nnamdi Asomugha, an NFL football player. The notoriously private Washington has an upcoming "Saturday Night Live" appearance slated for November 2.

Octavia Spencer cast in Murder, She Wrote.
"The Help" star, Octavia Spencer, has been cast as the lead in NBC's reboot of "Murder, She Wrote," which formerly starred Angela Lansbury. The original series ran from 1986 - 1994 on CBS. The network has ordered a pilot, which will see a contemporary spin put on the classic television show.

Get to know Fifty Shades of Grey's Jamie Dornan.
As Soaps.com reported last week, Jamie Dornan has been cast as Christian Grey in the film adaptation of Fifty Shades Of Grey. Find out more about the Irish model/actor/musician, best known for his role as Sheriff Graham/The Huntsman on "Once Upon A Time," by watching the clip below:

Lindsay Lohan parties with Miley Cyrus.
Hot on the heels of speculation that Lindsay Lohan ("Herbie Rides Again," "Freaky Friday") might be off the wagon, came reports that she was spotted at New York City's 1OAK with headline-making Miley Cyrus ("Hannah Montana"). E! News reported that the girls did not arrive together, were not seen to be drinking, and that they danced and had fun until about 3:00 AM. Lohan gave Cyrus a shout-out on Twitter:

Read Soaps.com's After The Soap Finales: Where Are They Now to get the details on ex-"Guiding Light's" Bethany Joy Lenz's role on Songbyrd. Watch a Hart Of Dixie spoiler video.

Rosamund Pike Thanks America’s Broken Legal System And Gives A Shout-Out To Maria Bakalova As She Nabs Best Actress, Motion Picture, Comedy Golden Globe For ‘I Care A Lot’