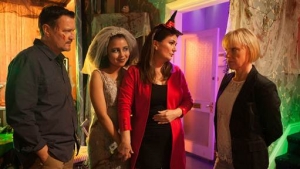 Eileen gets an uninvited houseguest on “Coronation Street.” Peter and Lola’s night doesn’t go as planned on “EastEnders.” Alicia makes a long delayed confession to Jacob on “Emmerdale.” Strapped for cash, Sienna makes a desperate move on “Hollyoaks.” Brax and Ricky face prison life on “Home and Away.” And Imogen and Amber make amends on “Neighbours.”

Coronation Street:
Spoiler alert: When Nick pushes himself too hard, David is the one who is left trying to keep the family together. His big gestures might not be enough to make that happen. Leanne is left wondering what to do about her marriage, particularly after Nick has another meltdown.

Tina decides to try and end her war against Tracy, but it could be too late. She attempts to keep a lid on Tommy while Rob is busy running around behind Tracy’s back. Meanwhile, Grace teaches Faye how she can get what she wants from Sally and ruin her life at the same time. Grace’s skills at manipulation could use a little fine tuning, however, since Anna almost catches on to the games she’s been playing.

EastEnders:
Spoiler alert: Before Michael’s plan can sink, he stumbles onto just what he needs to keep it afloat. The chance to kill Janine is clearly set before him, but it might be hard for him to go ahead with it. After taking a disturbing call from Alice, Michael tracks down Janine, who is all by herself on her birthday. Alice soon shows up and finds them together. It’s not long before one of them is dead.

Alfie and Roxy think that they can save their relationship by staying away from certain people. That could be harder than they were expecting. His week is complicated further when a get-together at The Vic goes all wrong. It gets even worse after Ronnie catches him in an intimate moment with Kat.

Emmerdale:
Spoiler alert: Victoria has a hard time throwing together a funeral for Turner. The event winds up launching a few surprises on the villagers who attend. Meanwhile, Laurel is not thrilled by Moira’s houseguest. Her week continues on the downturn when her bid for justice hits a snag. Moira’s week doesn’t look good either. She catches Cain planning a big scam so he can pull the cash together to save the farm.

Declan is not feeling optimistic about his future with Megan, no matter how hard she tries to convince him otherwise. She does manage to cheer him up though… for about five minutes. He goes sour again when Katie comes back. Across the village, Amy heads in for her meeting with social services. That doesn’t pan out as she thought it would. Later, Kerry nags her to reconcile with Joanie.

Hollyoaks:
Spoiler alert: After receiving a horrible diagnosis, a desperate Maxine proceeds to lie to Patrick in a bid to save their relationship. That lie might not be enough since it doesn't look like either of them will really be able to be forgiving. Meanwhile, Vincent continues having a hard time settling back into life in the town. To make things easier, he asks Phoebe a big question and they try to make plans for their future.

Lindsey decides that it's time for her to come clean with Joe, but she gets distracted by a different problem. She and Cindy have to run off and tie up some loose ends that could derail them. Finally, Lindsey tries to prove to Joe that she's really committed to him, but he has all kinds of nagging doubts. And an increasingly paranoid Ruby decides that she wants to get Ziggy back, but he does his best to avoid dealing with her.

Evil Dr. Browning (Joseph Thompson) and Clare Devine (Gemma Bissix) are on their way out of "Hollyoaks." Catch their fond farewell to their fans.

Home and Away:
Spoiler alert: Evelyn and Spencer's attempt to escape the cult are hampered by his injuries. Even as they get away, she remains unsure if she can bring herself to turn over evidence that will incriminate her father. Spencer continues to deteriorate as his bids to control his bi-polar disorder fail, leaving him faced with a hard choice.

Alf goes home at Marilyn's request. She gets him onside with John so the three of them can try to help Roo with her obsession over Harvey. Meanwhile, Dex gets a surprise when he learns about the big offer that April has received. It turns out that she has been in touch with her father again. And it's time for Indi to leave the bay behind. Before going, she is sure to tell Chris the real reason for her departure.

Neighbours:
Spoiler alert: Katie remains desperate to help Chris as he continues to fall apart. However, she may have already run out of all options. Elsewhere, Mason starts to feel like he should be keeping other options open when Rhiannon seems to be moving too fast. He gets the impression that she wants him to be a father figure to Jackson and he is not totally comfortable with that.

Gem continues to upset the apple cart. She manages to ruin Kyle and Georgia's plan to move in together. Even though they are on to her, she still manages to continue manipulating those around them. Bailey is the latest to fall for her charms. Meanwhile, Toadie actually tries to do something helpful and fails. He manages to make things worse with Eric and Sonya attempts to mediate between them before she and Toadie go out for a night of excitement.

Take a look behind the scenes as Saskia Hampele (Georgia) prepares to shoot some of her upcoming material.

Are you overwhelmed with feelings about the latest round of chaos that's been happening on one of your favorite soaps? Soaps.com wants to hear all about it. Be sure to cast your vote in this week's Soap Opera Polls. And then discover whether or not Chad's secret was revealed on Days of our Lives.