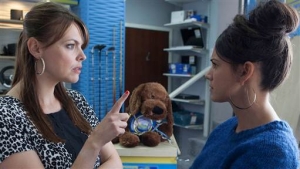 Dev helps Chesney out on “Coronation Street.” Lauren is devastated when things fall apart for Max on “EastEnders.” Someone loses their lover on “Emmerdale.” Holly gets a shock from Cindy on “Hollyoaks.” Jett obsesses over Nina on “Home and Away.” And Rhiannon and her son stir things up when he goes missing on “Neighbours.”

Coronation Street:
Spoiler alert: In the midst of an argument with Roy, Hayley takes a turn for the worse and is rushed to the hospital. Fiz and Tyrone join Roy to wait for news. In spite of this troubling event, Roy still may not be willing to fulfill Hayley’s final request. Meanwhile, Tim continues to disappoint Sally. He debates with himself about whether or not he should tell her what he really wants, but she remains desperate to hold onto him.

Felling bad, Dennis has something to tell Tina. He sold Rita’s ring to Barlow’s Buys. The next thing you know, Tina is gunning for Tracey. Although her rash actions get on Tommy’s nerves, Tina continues to escalate her battle against Barlow but taking on Weatherfield’s most dangerous woman might prove to be too much for her.

EastEnders:
Spoiler alert: Alice is desperate to get back into Janine’s good graces. She starts to tense up when her plan with Michael starts to fall apart. As she panics that she could soon be found out, Michael remains confident that the plan is going swimmingly. But when he pushes Alice to take the next move, she starts to have second thoughts about working with him.

David manages to annoy Ian and make Tiffany happy all at once. However, this little victory is soon marred as Sharon starts hurling accusations at Whitney. David tries to keep things cool but Whitney soon loses her temper and things flare up again. His attempts to keep the family together hit another snag when someone comes back.

Emmerdale:
Spoiler alert: Paddy finally faces up to Rhona, but he may have a harder time facing up to the fact that he was unfaithful to her. Meanwhile, Vanessa is put off by the fact that Rhona seems to keep snubbing her. Vanessa’s week gets an unusual distraction when she is called to attend to a human patient in spite of the fact that she’s a veterinarian. Across the village, Moira upsets Cain when he learns that she’s planning to sell the farm. He gives her a proposition she was not anticipating, but he may have to commit a crime to make good on his offer.

Chelsea Halfpenny will be leaving the cast of “Emmerdale.” She has been playing Amy Wyatt since 2010. Her exit date has not yet been announced.

Hollyoaks:
Spoiler alert: As Sam wonders whether or not she can forgive Danny, he leaves his family wondering a lot more when he tells them something surprising. Meanwhile, Tony is hoping that he won't be getting any surprising test results. To deal with the stress, he and Diane get nostalgic together. They plan a little trip but that's derailed when her water bursts and she goes into labour. The big event is complicated when Tony's test results arrive at almost the same time as the baby.

Phoebe is back to her familiar ways, but her life hits another bump when Vincent comes back to the village. People worry about whether or not he has changed. What he has to tell George and Phoebe leaves them startled. Meanwhile, Patrick is feeling shocked after he discovers that he has been betrayed. In a rage, he begins plotting revenge only to stumble onto yet another shock.

And get a taste of what's in store for this week on "Hollyoaks" with this video.

Home and Away:
Spoiler alert: Panic spreads after Josh goes missing from the hospital. As people search for him, he searches his brain for clues about why he and Maddy broke up. He's not the only one with doubts. Tamara is having them about something completely different. She thinks she's going to flunk her exam so Casey tries giving her a pep talk. Meanwhile, Indi remains clueless about what her dreams of Romeo mean.

The battle to win over the kids at Mangrove River is going to be even harder than Bianca thought. The little bastards trash her office. If teenagers weren't difficult enough to deal with, Chris is still having a hard time breaking Spencer out of his brainwashing so he can leave the cult. And just as Roo's friends start to worry about her state of mind, she tries to keep herself optimistic, even if that means lying to herself.

Neighbours:
Spoiler alert: Chris' week goes from bad to worse. First, he is issued a warning at work and then he sees an article online that raises his ire. Meanwhile, Sonya gets busy trying to help Josie, who doesn't appreciate it, especially after it all goes pear shaped. Remaining a busybody, Sonya then rushes off to help Mandy and Eric. They aren't the only ones in need of help. Georgie and Kate are pushed further apart thanks to Gem.

Imogen and Amber can hardly hide how much they like each other's mothers. Imogen has a harder time hiding her feelings for Mason from her friends. Unfortunately, those feelings soon turn sour and her heart is broken, forcing her to face a possible relapse. Across town, Lauren and Terese remain unsure of themselves while Matt is unsure of what's going on with Lauren after he finds one of her sketches. And Lauren causes problems for the Turners thanks to her relationship with Brad.

Get some surprising answers to questions from the fans in this Q&A with "Neighbours'" Kate Kendall (Lauren) and Melissa Bell (Lucy).

Are you bursting with feelings about what's been happening on one of your favorite soaps? Soaps.com wants you to let it all out by casting your vote in this week's Soap Opera Polls. And then discover who hit Delia on Y&R.