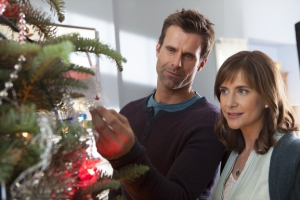 Soaps.com has details for current projects for some former soap stars of Daytime’s canceled soaps, “All My Children,” “Another World,” “As The World Turns,” “Guiding Light,” “One Life To Live” and “Santa Barbara.” There are film roles, one being “Fast & Furious,” a new CW and NBC role, holiday Hallmark movies, a stage performance, an album release, a Hollywood separation, and more in this month’s after-Daytime column.

Cameron Mathison in The Christmas Ornament.
Cameron Mathison, who played Ryan Lavery on ABC’s version of “All My Children,” will be turning up in a special holiday feature as part of the Hallmark Channel’s Countdown to Christmas. On Saturday November 16 at 8:00 PM tune in for the network’s original movie “The Christmas Ornament.” The story follows a widow who wishes for a holiday season full of happiness. Kellie Martin (“Army Wives”), Jewel Staite (“The Killing”) and Brendan Meyer (“Mr. Young”) have also been cast.

Cameron Mathison in Window Wonderland.
Fans of the former “All My Children” actor will get to see Cameron Mathison (ex-Ryan) in another Hallmark Channel movie next month. Mathison will appear in “Window Wonderland” on Saturday November 23 at 8:00 PM. Viewers will be drawn in as two different department store employees, with secrets, compete for the same high-profile window dressing job. Little do they know, they have a lot in common. Visit the Hallmark Channel’s Countdown To Christmas for more holiday originals, as well as Mathison’s other movie “A Very Merry Mix-up.”

Stephen Schnetzer onstage in Tribe.
Stephen Schnetzer is no stranger to Daytime and has appeared on soaps such as “Another World” and “As The World Turns” and “Guiding Light” as Cass Winthrop, “Days of our Lives” as Steven Olson and “One Life To Live” as Marcello Salta. Now the actor is performing onstage in Nina Raine’s “Tribes.” The play follows a young deaf boy named Billy, who has to adjust to the ‘hearing world’ and deal with those, including his family, who don’t understand him. Performances will take place in the McGuire Proscenium at the Guthrie Theater and will run through November 10. Please call 1-612-377-2224 or visit the Guthrie Theater for tickets. Watch the actor’s special message to his fans:

Jensen Buchanan divorcing after ten years of marriage.
Soap opera veteran actress Jensen Buchanan, who has had roles on “Another World” (Marley Love Hudson McKinnon), “As The World Turns” (Vicky McKinnon), “General Hospital” (Melissa Bedford, “Port Charles”) and “One Life To Live” (Sarah Gordon Buchanan), is splitting from her high-powered Hollywood agent husband after ten years of marriage. TMZ is reporting that Paradigm Talent Agency’s Sam Gores filed for a legal separation based on irreconcilable differences. Though documents prove the couple had a pre-nup, Gores allegedly plans to pay spousal support.

Trent Dawson onstage in The Pain And The Itch.
Trent Dawson (“As The World Turns'” ex-Henry, 1998 to 2010) is starring as Cash in the Bruce Norris play “The Pain And The Itch,” which follows politics in the Pacific Palisades. Fans can attend performances through December 1 at The Zephyr Theatre at 7456 Melrose Avenue in Los Angeles, California. Call 1-323-960-5774 or visit Plays 411 for tickets. Since his Daytime role Dawson has appeared on “The Good Wife” and “Homeland.”

Anne Heche in Nothing To Fear.
Anne Heche, who most recently starred in the NBC series “Save Me” and played “Another World’s” Vicky Hudson from 1987 to 1992, is currently starring in the horror flick “Nothing To Fear,” released in Russian markets in late September. The actress plays Wendy in the film that surrounds how one family’s path toward a better life is put on a different course by an unstable man of the cloth.

Billy Magnussen in The Money.
Billy Magnussen, who played “As The World Turns'” Casey Hughes from 2008 to 2010, is the latest actor cast on HBO’s new David Milch pilot “The Money,” a story of riches and fraud among the upper-class. Look for the former soap star in a series regular role as the son, Greg Castman, of tycoon James Castman, played by Brendan Gleeson. Magnussen has appeared in Primetime shows as of late including “Blue Bloods,” “CSI” and “Boardwalk Empire.”

Julianne Moore in Carrie:
Julianne Moore, who played “As The World Turns'” Frannie Hughes from 1985 to 2010, can currently be seen as Margaret White in Stephen King’s 2013 remake of “Carrie.” The film was released on October 18 and surrounds a shy girl named Carrie, who goes on a telekinetic rampage at her senior prom after being pushed too far.

Duane McLaughlin releases Ready To Live.
Duane McLaughlin ("As The World Turns'" ex-Dallas Griffin, 2006 to 2007) has released his new inspirational album Ready To Live. Visit iTunes: Ready To Live to preview and download songs today. The actor will also take part in the 26.2 mile New York City Marathon on November 3. McLaughlin will run among 8,000 other participants for Team Kids, an organization that supports health and fitness programs for children.

Susie Abromeit in Snow Bride.
Susie Abromeit, who played Anna Kasnoff from 2008 to 2009 on "As The World Turns," will appear in the upcoming Hallmark Channel movie "Snow Bride." The story surrounds a tabloid reporter's quest to find juicy gossip about an influential family in order to be granted a promotion. However, after spending some time with the family, and falling in love with one of the prominent sons, she changes her opinion of them. Robert Curtis Brown ("The Young And The Restless'" ex-judge, "All My Children's" ex-Paul Miller, "Search For Tomorrow's" ex-Alec Kendall) will also appear. Tune in on Saturday November 9 at 8:00 PM. Most recently Abromeit has appeared on "The Haves And The Have Nots," "The Glades" and "Hollywood Heights."

Martha Byrne to Crisis.
Martha Byrne, who played the longtime role of "As The World Turns'" Lily Snyder from 1985 to 2009, will turn up in Primetime next year. The actress has landed a role on the upcoming NBC series "Crisis." The political thriller, which surrounds the kidnapping of the president's son, will premiere sometime in 2014 and stars Gillian Anderson ("Hannibal") and Dermot Mulroney ("New Girl"). As of yet there are no details on Byrne's role.

Bethany Joy Lenz cast on Songbyrd.
Bethany Joy Lenz, who appeared in "Guiding Light's" Springfield as Michelle Bauer from 1998 to 2000, has been cast in the lead role of Lauren Byrd in the new E! drama pilot "Songbyrd." Her character, a writer of love songs, must find a new inspiration after discovering her ex-fiancé wasn't the man she thought him to be. Most recently, the actress appeared as Cassie on "Dexter" and played Haley for nine years on "One Tree Hill."

Sherry Stringfield to CSI:
"Guiding Light" alum Sherry Stringfield (Christina 'Blake' Bauer, 1989 to 1991) has landed a role on CBS' crime series "CSI." The actress will join the team as a character named Dawn who works the swing shift. While at work she investigates serial rapists, but at home she must deal with her addict son. After leaving Daytime, Stringfield landed many guest starring roles and played Dr. Susan Lewis on "ER" from 1994 to 2009. She also appeared in the May 11, 2013 made for television film "The Confession."

John Brotherton to Fast & Furious 7.
His Llanview character, Jared Banks, may have died back on "One Life To Live" in November 2009, but John Brotherton has kept busy since leaving Daytime behind. The actor has landed a big movie role as Sheppard and will appear alongside Kurt Russell as his character's right-hand man in the 2014 film "Fast & Furious 7." Actors set to return to the popular film franchise include Vin Diesel (Toretto), Paul Walker (Brian) and Dwayne Johnson (Hobbs), just to name a few.

Christopher Cousins to Revolution.
Fans of Christopher Cousins will be able to see him in a recurring role on NBC's "Revolution." The actor plays Patriot Victor Doyle and has appeared on other Primetime shows such as "Glee," "Twisted," Longmire" and "Breaking Bad." Cousins also played Cain Rogan on and off on "One Life To Live" from 1991 to 2008 and Greg Houston on "Another World" in 1986.

Paul Johansson on Beauty And The Beast.
Paul Johansson, who played Greg Hughes on "Santa Barbara" from 1989 to 1990, has joined the cast as Tori's (Amber Skye Noyes, "One Life To Live's" Michelle) father Kurt on the CW series "Beauty And The Beast." Season two of the series premiered on Monday October 7, and Johansson will first turn up during episode six. The actor is also working on the projects "Love And Skin" (Richard), "Kid Cannabis" (Detective Morgan), "The Winner 3D" (Darkman) and "Dear Eleanor" (Hugh).

Read Soaps.com's Revenge Recap: Control to find out what shocking news Daniel revealed in last Sunday's new episode and read our Glee Spoilers: A Katy Or A Gaga to see who will guest star when the FOX series returns with new episodes on Thursday November 7 at 9:00 PM.