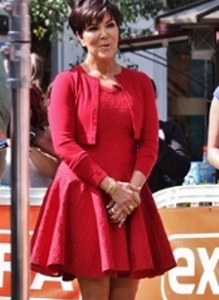 This week in celebrity news, there are hits, misses, splits, weddings and more…

Kris Jenner and Bruce Jenner call it quits.
“Keeping Up With The Kardashians” couple, Kris Jenner and Bruce Jenner issued a statement to media this week saying that they have separated. Apparently they’ve been living apart for a year already, and are happier that way. Jenner will continue to appear on their reality TV show. They told E! Online, “We are living separately and we are much happier this way. But we will always have much love and respect for each other. Even though we are separated, we will always remain best friends and, as always, our family will remain our number one priority.”

Miley Cyrus on sex over forty.
There’s been no respite from hearing Miley Cyrus’ (“Hannah Montana”) name in the headlines. Last week she ended up in a back-and-forth session with singer Sinead O’Connor who wrote Cyrus a letter encouraging her not to ‘prostitute’ herself for others in reference to Cyrus’ attention-getting VMA performance and nude Wrecking Ball video. Cyrus, of course, wasn’t receptive, and made controversial retaliatory remarks comparing O’Connor to Amanda Bynes (“She’s The Man”) who has struggled with mental issues. O’Connor then demanded an apology and even threatened to sue. Cyrus merely continued on promoting her new album, Bangerz, and in an eye-brow raising interview with Matt Lauer on “The Today Show,” indicated that she believed that peoples’ sex lives basically go downhill beginning at the age of 40! Lauer, age 55, was informed that he was ‘definitely not sexual’. Media head-shaking, debate, and reaction ensued.

Thank you @dotmariejones for making me the happiest woman in the world. #engaged

Naya Rivera engaged.
“Glee” star, Naya Rivera, got engaged to rapper Big Sean, whom she has been dating for about six months, and showed off her ring at a Latina Magazine party on Thursday October 3. In an interesting twist, the pair met and began communicating on Twitter.

Bieber single hits number one.
After being released on Monday October 7, Justin Beiber’s new single, Heartbreaker, had hit the #1 position on iTunes charts in 52 countries within two days, according to the National Post. Speculation is that the song was written by Bieber about his ex, Selena Gomez (“Shake It Up”). The Biebs is expected to release 10 new songs – one each Monday – for 10 weeks.

Lauryn Hill released from jail.
Singer Lauryn Hill completed her stint in prison and was released on Friday October 4. The Grammy winner served a three month sentence for tax evasion and is now on probation for one year, which includes a three month period of confinement in her home. The CEO of her label, Ruff House Records, told People that Hill is ready to return to work. She recently released a single called, Consumerism.

Lindsay Lohan on a health kick?
Lindsay Lohan ("Mean Girls," "Herbie Fully Loaded") surprised some by being spotted out and about in New York with her mother, Dina Lohan, riding CitiBikes through the West Village. They didn't quite reach 'health nut' status, however, as they were photographed re-hydrating with Coca-Cola rather than water.

Charlize Theron has neck surgery.
People reported that actress Charlize Theron ("Prometheus," "The Italian Job") recently went under the knife for a small procedure to correct a vertebrae she had broken years previously. A source confirmed that she was 'fine' following the operation.

Having the time of my life at said wedding with @katewalsh @joshbkelley Kate's amazing fella Chris & my girl Chey! pic.twitter.com/oxQ0RduvKY

It's a boy for Halle Berry and Olivier Martinez.
Actress Halle Berry ("X-Men," "Catwoman") and husband, Olivier Martinez ("Cybergeddon," "Unfaithful") welcomed their first child together, a son named Maceo-Robert, into the world on Saturday October 5. Berry also has a daughter, Nahla, age 5, with model Gabriel Aubry.

Madonna recalls rape.
In an article for the November issue of Harper's Bazaar, Madonna recounted the numerous difficult experiences she survived as a 20 year-old struggling artist in New York City, including being raped on the roof of a building. Watch the video clip for more.

Eminem's daughter is Homecoming Queen.
Hailie Scott, rapper Eminem's ("8 Mile") 17 year-old daughter, was recently crowned Homecoming Queen at Chippewa Valley High School in Michigan. Scott's proud papa reportedly watched the coronation from an empty classroom in the building so that his daughter could have her moment in the spotlight without any scenes being caused by his presence.

Get the details on Kim Raver reprising her role on 24: Live Another Day, and find out which Daytime Actors will be at Fall Bash Weekend.