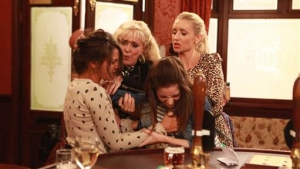 Lauren and Jake get together. (BBC)

A familiar face returns to the Rovers on “Coronation Street.” Things heat up between Lucy and Danny on “EastEnders.” Marlon faces doom on “Emmerdale.” Sinead puts a wrinkle in Ste and Doug’s plans to leave “Hollyoaks.” John has to come clean with Marilyn on “Home and Away.” And Bailey is suspicious of Callum on “Neighbours.”

Coronation Street:
Spoiler alert: Furious Kylie demands the truth out of Tina. When she gets it, she explodes, leaving David and Nick to deal with the disaster their lives have become. Meanwhile, Steve’s life is in much lower-level disaster mode as things get even more awkward with Michelle thanks to Liz’s return. Her week only gets more annoying when her father makes a confession to her that she was not expecting.

Roy gets a dancing lesson and whisks Hayley away to Blackpool for a ball. She’s amazed by his thoughtful gesture. He’s shocked by what she suggests afterwards. Her final request may be more than he is willing to do.

Former “Emmerdale” actress Hayley Tamaddon (ex-Delilah) has joined the cast of “Coronation Street.” She will play Andrea, a friend Steve (Simon Gregson) makes when he decides to head back to school.

EastEnders:
Spoiler alert: Jack tries to cheer Ronnie up, although Phil clearly is not supportive of this. The tension between the Mitchells is matched by the tension between Jack and Ronnie, who wonder about what could have been. Ronnie also feels some pressure from Carl but then she feels support where she was not expecting it.

Michael’s dastardly scheme to ruin Janine could hit a roadblock thanks to Alice. He has to think fast to try and keep her on board but seems to succeed in effectively pulling her strings. Meanwhile, Carol can’t be sure that she can trust herself around David, especially after she hears that Bianca has extended her trip. And Ian notices that David is back. It’s not long before they are pushing each other’s buttons.

Emmerdale:
Spoiler alert: Debbie disappears and Sarah is sure that Cameron is behind it. Cameron's up to a lot more than that. Not only has he gone after Debbie, he has taken hostages at the Woolpack. Pretty soon, someone is shot. With things quickly spiraling out of control, Cameron gives his hostages a difficult choice that won't save them all. Cain hears about the situation and heads back to town as the cops prepare to strike.

After Ruby gives her mom some shocking news, Lindy makes an unexpected offer to Ruby. But Ruby's plans could hit a snag. Sean tips Ali off about Ruby's plot to take off. Kerry further upsets things with a choice that could seriously undermine Ruby's baby plans. Meanwhile, Alicia has a hard time enduring Priya's hen night. When she sees David, she finally blurts out how she really feels.

Hollyoaks:
Spoiler alert: Mercedes' big birthday party plans hit a snag thanks to an unwelcome guest who drops in for the festivities. This leaves the McQueen clan in shock. Shock is actually a common reaction next week. Ash bumbles on to some terrifying information about Will. She's shocked and tries to confront him. He has got other problems too, like finally taking care of Dodger.

Thanks to recent disturbing events, the whole village seems to be in a state of shock. It's not long before Lindsey and Cindy are forced to face some rather unpleasant truths. Their secret binds them close together. Meanwhile, Sam is determined to track down the person who has been wreaking chaos on her life, but when she finds out who it is, the shock could be too much for her.

Meet some past favorites in this visit behind the scenes of "Hollyoaks Later."

Home and Away:
Spoiler alert: Oscar and Sasha start to worry when Spencer gets interested in Serenity Lodge. Evelyn is not thrilled to see him pop up either. It's left to Sasha to try and make him see sense. Meanwhile, Bianca heads to Summer Bay High to take on the students of Mangrove River. She has some misgivings about this and that is quickly complicated when she has a run-in with the principal.

Nina dumps Jett. He gets upset and winds up taking it out on John after the latter refuses to take some advice. Across town, Robyn continues to plot her bid to win Chris back but Indi could throw a wrench into that plan when she shows up to confront her. And April and Dex kick off their engagement.

Neighbours:
Spoiler alert: Things get complicated for Kyle and Kate. First, Georgie stumbles on evidence against them. Then Gem tells them a story that leaves them baffled. Not baffled but befuddled, Imogen and Toadie are stuck in a sticky predicament at work and aren't sure what to do. She winds up getting the sack and her unsavory actions could also end up sinking Toadie.

Rhiannon scores a new job after she agrees to withdraw the statement she made about Paul and his corrupt activities. Later, Sheila shows up and tries to get Chris and Rhiannon under her influence. However, Chris is distracted after he receives a letter from Hudson. He can't force himself to read it. And Lou takes off to spend some time with Lolly.

Watch Jiordan Tolli (Lolly) and Tom Oliver (Lou) talk about her character returning to "Neighbours" after leaving 12 years ago.

Are you feeling miffed about what's been going down on one of your favorite soaps? Soaps.com wants you to let us know about it. Be sure to cast your vote in this week's Soap Opera Polls. And then discover what had Jenn screaming on DOOL.