Emmerdale:
Spoiler alert: Amy has a bad week. After being bummed out from learning how Joanie feels about her, she loses Kyle forever thanks to a terrible accident. Meanwhile, Rodney's attempt to keep his secret life a secret from Georgie hits a serious snag when Rishi throws what she knows about it in his face.

Ali could be having cold feet about her baby plans. Ruby certainly thinks that's the case. Considering how much their financial situation stinks it's likely. Even if life isn't going well, Ruby still encourages Belle to give a second shot to Sean. That won't be happening for Debbie. Chas is furious to see her reunited with Dingles. It soon dawns on her that she's not out of trouble by a long shot. And Paddy tries to pull his life out of the slump it's in by turning to a former lover. That only makes things worse. He starts to worry that Vanessa will rat him out.

Hollyoaks:
Spoiler alert: Fraser and Trevor plod ahead with their plan to frame someone. At that moment, Will starts to fear that his bad behavior will be discovered. His paranoia only increases as Ash and Martha start to act strangely around him. As Will starts to act out and appall Ash, Dodger stumbles on some unpleasant details from Will's past.

Things are looking grim for Ste as he remains haunted by the past. Doug decides it's time for him to know the truth. Meanwhile, Mercedes sets her sights on taking down Trevor and loops Sinead in to help her. Their bid to get Trevor out of their lives permanently could wind up putting them, and their families, in danger.

Take a look at this trailer for "Hollyoaks Later."

Home and Away:
Spoiler alert: The day of judgement comes in court. Everyone is high-strung as the court case winds down. Andy admits to Josh that Brax killed their father. A plot for revenge is already in the making.

Dealing with Romeo's death proves hard for Indi. After she pushes Chris away, she has to face Robyn. Things only get worse when Romeo's ashes arrive on her doorstep. Meanwhile, Kyle has a hard time handling Tamara and Casey being a couple. Tamara quickly realizes that she has become too close to Case too quickly. And Jett pushes John to tell Marilyn how he really feels about her. She gets an ominous feeling.

Neighbours:
Spoiler alert: Amber and Josh have a hard time agreeing on the nature of their relationship. He's not the only one who thinks that things are going wrong with Amber. Lauren is worried that she has betrayed her trust. Meanwhile, Georgie goes after Paul when he plans to sue her. Gem moves in with her and immediately gets a job. She does this by keeping some of the details about her past quiet, but it's not long before Susan starts to suspect that giving her a job was not a great idea.

Kate puts her energy into helping Sheila with her problems. Sheila continues to panic, fearing that she is being stalked. Kate keeps pushing Mason away. He complains to Imogen and she shares his dislike of relationships. However, she also happens to be developing feelings for him and has a hard time hiding them. And a stranger throws themselves at Kyle.

Get a preview of Gemma's obsessive behavior on "Neighbours."

Are you fuming about what has been happening on one of your favorite soaps? Soaps.com wants you to let it all out. Be sure to cast your vote in this week's Soap Opera Polls. And then discover what happened after Kiki learned Michael wasn't her cousin on GH. 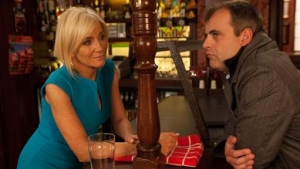 Eileen winds up on a date with Barrie on “Coronation Street.” Alfie tries forcing a confession out of Roxy on “EastEnders.” Cameron’s escape sends the villagers into a panic on “Emmerdale.” Jim has a plan to get the village out of danger on “Hollyoaks.” Spencer tries dealing with his bipolar disorder without medication on “Home and Away.” And Chris’ attempt to get over Hudson leads him toward destruction on “Neighbours.”

Coronation Street:
Spoiler alert: David can feel his life falling apart as Nick reveals that he remembers everything that happened before the crash. He makes some harsh demands on his brother. Tina is also making demands on David. She offers to help him get the DNA test done, but it could be for naught since Kylie catches them conspiring and has a fit.

Steve’s mysterious behavior is getting on Michelle’s nerves. He plots to buy the Rovers back from Stella. He asks her to keep this quiet until he can tell Michelle about it. Meanwhile, Roy’s relentless logic continues to get in the way of him comforting Hayley. However, things brighten up a little when she attends a cancer support group and is encouraged to enjoy the time she has left.

EastEnders:
Spoiler alert: News about the transplant operation comes down to Dexter, but he soon starts to worry that there could be future complications. As Sam’s health deteriorates, Dexter’s guilt starts to eat him alive. He is forced to decide whether or not he is willing to undergo a dangerous operation in order to save his father.

David settles back in and lays on the charm, but not everyone is buying it. He attempts to get some money out of Janine, but she has more to worry about than her step-brother. Michael continues to wear her down and manipulate her. He ups the ante and terrifies her when Scarlett is placed in danger. He pulls Alice further into his plans to ruin Janine. Her week gets even worse when Danny places her in competition with Lucy.

It looks like “EastEnders” will be having a substantial makeover soon. The series has cut six of its actors. Kierston Wareing (Kirsty Branning), Phaldut Sharma (AJ Masood), Daniel Coonan (Carl White), Rachel Bright (Poppy Meadow), Cornell S John (Sam James) and Clare Perkins (Ava Hartman) have all been axed from the soap. Their final scenes are expected to air before Christmas. 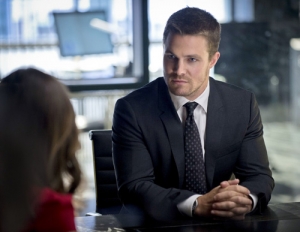