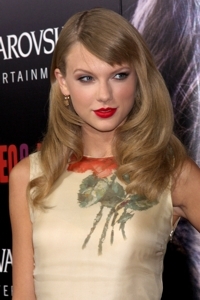 This week in celebrity happenings there is news about Bieber, Cyrus, Spears, and Lohan, legal updates, a couple of baby pictures, and more…

Taylor Swift meets with young accident victim.
On Saturday September 21 in Nashville, Taylor Swift took time at her concert to personally meet with young fan Grace Markel, who had been struck and injured by an SUV while on her way in to a previous Swift concert in Chicago. The seven year-old’s mother told People that the singer gave her little girl an autograph and hugs when they were brought backstage.

Britney Spears’ Vegas ticket sales making history?
According to Britney Spears’ manager, Larry Rudolph, his client has the best-selling show in Las Vegas history. Rudolph told E! News all about the amazing sales for Britney Spears: Piece Of Me, which begins its run at Planet Hollywood on December 27. Ceasers Entertainment’s chief marketing officer, Tariq Shaukat, also released a statement in this regard: “This is as strong an on-sale performance as we’ve seen for any of our iconic Las Vegas headliner shows.”

Lindsay Lohan single again.
Actress Lindsay Lohan (“Freaky Friday,” “Herbie Fully Loaded”) has split up with her boyfriend, former Philadelphia Eagles player, Matt Nordgren, according to US Weekly. Their busy schedules and distance were cited as factors in the break-up.

Lamar Odom responds to father’s allegations.
Troubled former NBA star, Lamar Odom, took to Twitter to respond after his estranged father spoke out in the media blaming Odom’s wife, Khloe Kardashian (“Keeping Up With The Kardashians”) and her family for his son’s issues. Odom, who has kept quiet throughout media speculation about his substance abuse problems and marriage woes, put his father on blast with this tweet (click on the link to read the entire statement):

Won't continue 2 speak on this but I have got 2 let this out real quick. I have let this man and many others (cont) http://t.co/ACFVHjkevg

Excited to share some news with y'all. We are having a baby 🙂 pic.twitter.com/STCf4gsroV

Fergie and Josh Duhamel share baby photo.
Proud new parents, Josh Duhamel (“Las Vegas,” “All My Children”) and wife Fergie of the Black Eyed Peas, have been sharing photos of their newborn, Axl Jack, with fans online. Most recently was this snap of the three week-old cutie posted by Fergie on Twitter:

Chad Michael Murray and Kenzie Dalton split.
The engagement between Chad Michael Murray (“One Tree Hill”) and Kenzie Dalton, who met on the set of the popular TV series “One Tree Hill” when she played the part of a cheerleader, has ended after seven years. People reported that Murray has been seen out in L.A. with his “Left Behind” co-star, Nicky Whelan.

Amanda Bynes unfit for trial.
Actress Amanda Bynes ("She's The Man"), who is still receiving treatment for mental issues and whose parents took control of her legal and financial concerns via a conservatorship, was deemed unfit to appear at her DUI trial by her lawyer. TMZ reported that the judge in the case referred the matter to a mental health court, where Bynes' competency will be evaluated.

Kanye West responds to lawsuit.
Rapper Kanye West responded to a civil suit brought against him by a photographer he scuffled with at the L.A. airport by saying he acted in self-defense. TMZ reported that West had his lawyer file papers stating that his 'safety was in immediate danger'. West was charged with misdemeanor battery and attempted grand theft in relation to the incident and will be arraigned on October 10.

Miley Cyrus mentoring Justin Bieber?
Miley Cyrus remained in the headlines this past week, this time dishing in a Rolling Stone interview about Justin Bieber. To hear about the rather puzzling advice she gave him regarding his career, watch the video clip:

Jordana Brewster's first baby picture.
Actress Jordana Brewster ("Fast and the Furious," "As The World Turns"), who just gave birth to her first child with husband Andrew Form via surrogate, took to Twitter to share the first photo of herself bonding with her new son, Julian:

Read about ex-"AMC's" Jamie Luner in The Cheating Pact, and get the scoop on whose behavior is setting off alarms for EastEnders' Abi.

The Price Is Right Showcases Daytime...