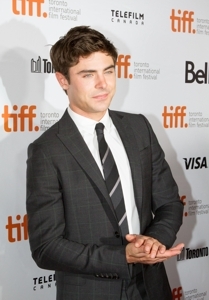 Zac Efron’s rehab stint.
On the heels of Zac Efron (“The Lucky One,” “High School Musical”) showing up on the red carpet at the Toronto International Film Festival looking very good indeed, E! Online reported that Efron had in fact completed a stint in rehab five months ago. It was unclear what sort of substance abuse he received treatment for, although their source mentioned that he is ‘not drinking’ now and is focusing on his career. TMZ has speculated, based on information from various unnamed sources, that Efron may have been using cocaine and even Molly (a form of Ecstasy) prior to entering rehab.

Miley Cyrus and Liam Hemsworth split.
Did Miley Cyrus’ (“Hanna Montana”) VMA twerking scandal and nude music video take a wrecking ball to her relationship? It seems so. Hot on the heels of Cyrus ‘unfollowing’ Liam Hemsworth (“The Hunger Games,” “The Last Song”) on Twitter, reps for the couple confirmed to People that the pair had called off their engagement. In addition to this news, photos surfaced on TMZ of Hemsworth flirting with Mexican actress/singer Eiza González in Las Vegas.

Justin Bieber cast in Batman movie?
Pop singer Justin Bieber caused an uproar online recently by posting a photo of himself with a script for the upcoming Batman movie on Instagram, and hinting via hashtag that he might be playing Robin in the film. Could it be true? To find out more about this casting news watch the video below:

Lamar Odom DUI.
Keeping Up With The Kardashians’ Khloe Kardashian’s estranged husband, former NBA player, Lamar Odom, was charged on Friday September 13 with one count of driving under the influence following his arrest on August 30 after being pulled over by the California Highway Patrol for driving erratically. Odom is due back in court on September 27.

Julianne Moore cast in Hunger Games.
Julianne Moore (“The Big Lebowski,” “Crazy, Stupid Love”) has been cast in the next Hunger Games movie, “Mockingjay Part 1,” as Alma Coin. Her character leads a rebellion against Donald Sutherland’s (“The Italian Job,” “Dirty, Sexy Money”) President Snow. Moore was welcomed to the role on Twitter:

Lindsay Lohan’s mother’s DUI.
Dina Lohan (“Living Lohan”) was stopped for speeding on Long Island the night of Friday September 12 and was found to have twice the legal limit of alcohol in her blood. Lohan was booked and then released to a sober third party, according to TMZ. On Sunday September 15, she reportedly celebrated her 51st birthday in New York with her kids, and without booze.

Britney Spears announces Vegas show.
Pop star Britney Spears has officially announced her upcoming two-year residency at the Planet Hollywood Resort & Casino in Las Vegas. The show, Britney Spears: Piece Of Me, will debut on December 27. She will play 50 shows per year in both 2014 and 2015. Spears is also set to release a new album on December 3. Her father, Jamie Spears, will continue to be in control of his daughter's financial and legal concerns throughout her residency, according to TMZ.

Kanye West charged with battery.
Rapper Kanye West has been charged with misdemeanor battery and attempted grand theft following a run-in with a photographer and his camera back in July at the Los Angeles International Airport. Kim Kardashian's ("Kourtney and Kim Take Miami") baby daddy will be arraigned on October 10.

Putting my beachbunnyswimwear bridal line to good use in Portofino! http://t.co/MNIpYJQ6ki

Paula Deen returns.
On Saturday September 14, Paula Deen ("Paula's Best Dishes") made her first public appearance since weathering the racial slurs scandal that changed her world. Deen cried tears of happiness as she was greeted with a standing ovation by the crowd of about 1,500 people gathered to see her at the Metropolitan Cooking & Entertaining Show at Houston's Reliant Center.

Kris Jenner bikini shot.
Momager, Kris Jenner ("Kris"), age 57, said goodbye to Summer by posting an Instagram of herself in a swimming pool wearing a bikini. She shared the image on Twitter as well:

Alexander Skarsgard will race Prince Harry.
Alexander Skarsgard ("True Blood") is set to take on none other than Britain's Prince Harry in a race to the South Pole in November. The race, which will benefit Prince Harry's Walking With the Wounded charity, will consist of three teams of wounded soldiers from the US, UK, and Canada/Australia competing in a 16 day trek across ice and snow in Antarctica. Brr!

Find out who is on the outs with Coronation Street's Carla, and read about the upcoming Halloween television special, Thirteen Nights of Halloween.