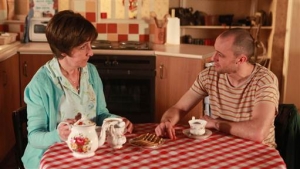 Stella’s announcement shocks her friends and family on “Coronation Street.” Dot continues to struggle on “EastEnders.” Amy is left to fix things after Pollard messes up on “Emmerdale.” Dodger races to save Maxine on “Hollyoaks.” After being humiliated by Heath, Dex vows revenge on “Home and Away.” And Toadie gets news he wasn’t expecting on “Neighbours.”

Coronation Street:
Spoiler alert: While Nick is rapidly recovering, Tina tells David to hurry up and come clean with his brother before he figures everything out. After being momentarily distracted by his exhausted wife, David pays his brother a visit and attempts to fill him with false memories before he can remember the truth.

Eva and Jason have a hard time controlling the urge to act on their feelings. Michelle has a similar problem, but involving rather different emotions. After sticking it to Peter, she winds up on the outs with Carla. Meanwhile, Hayley is reunited with her son again, but will they be able to get over their past problems?

EastEnders:
Spoiler alert: Sam’s diabetes continues to be a source of worry for Ava and Dexter. He just wants to do the right thing, but he keeps getting mixed messages from his family about what that might be. Meanwhile, worried about Kristy, Carl tries to keep her on side with a fresh offer. However, she already wants something else. She sets her eyes on Kat, assuming that she can give her what she wants.

Roxy keeps seeing Ronnie behind Alfie’s back. As she tries to figure out how to get out of that romantic mess, Masood prepares to romance Carol. Unfortunately for them, the night is ruined when someone crashes their date. It’s David and she has no idea why he wants to be back in her life.

Emmerdale:
Spoiler alert: As Cameron heads to court, Nicole heads to the factory for her first day of work. From the get-go she is getting on some people’s nerves. She’s also getting on a lot more than Jimmy’s nerves. He’s appalled to learn about her latest betrayal. Across the village, Ashley is busy worrying that she may soon be homeless and Moira moves ahead with her plan to sell the farm.

The distance between Paddy and Rhona increases after she betrays him once again. They split up. She gets desperate to save her marriage, so desperate that it shocks Marlon. Meanwhile, David worries that he may be hurting Alicia unintentionally. Dom is also worrying about that and questions her about the extent of her feelings for David. And Amy could be going over the top to be with Kyle.

Hollyoaks:
Spoiler alert: After Jim refuses to sign over his business, Trevor and Fraser decide to burn down his club and frame him for it. They decide to get Freddie to torch the place. He only agrees to do it so that Sinead won't have to be a hooker anymore. However, when he burns the place down, he doesn't realize that Sinead and Maxine are inside.

Frankie has to deal with the aftermath of running over a pregnant woman. No matter how bad people treat her, she still makes herself feel worse. When she returns to the garage, Ziggy admits that he didn't actually service her car and that's why she got in the accident. She's furious, but the screaming quickly leads to making out.

Home and Away:
Spoiler alert: Keeping Indi and Robin apart turns out to be a full time job for Chris. Unfortunately for him, he's not up to it and the two of them get together. While Chris is facing some female fury, Leah is busy worrying about Hannah and Zac as the cops go looking for them. Hannah is doing her best to keep the twins safe from what Murray has planned for them.

Zac and Ricky get busy attempting to de-program Evelyn. Although that's a heavy task, Ricky is still distracted by what Josh and Brax's connection could be. Meanwhile, Josh decides that Brax cannot be trusted and turns to Maddy for her help. And Casey, Kyle and Tamara are all trying to be friends, but that's difficult since Casey and Tamara are having a hard time fighting their blossoming attraction to each other.

Take a peek at what else is ahead on "Home and Away."

Neighbours:
Spoiler alert: After some discussion, Lucas and Vanessa decide it is time for them to pack up and leave Ramsay Street behind. Meanwhile, Paul is worried that Georgia is not capable of living up to the career plans which he has cooked up for her. She has a hard time after losing control of her song and that only gets worse as it sinks in.

Chris has a hard time dealing with the fact that Hudson rejected him. Kyle and Sheila worry that he could do something desperate. It turns out that they are right to be worried. Meanwhile, Matt and Mason continue to be at odds. Mason rejects his latest offer. When he turns around, he feels some rejection of his own thanks to Kate. This leads to him and Matt trying to work out a compromise.

Are you feeling hot under the collar about something that has been happening on one of your favorite soaps? Soaps.com wants you to let it all out. Be sure to cast a vote in this week's Soap Opera Polls. And then discover what goes down when things are turned around on Lily on Y&R.