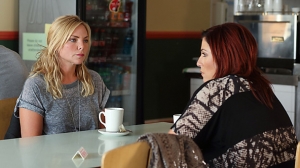 Hayley heads home exhausted on “Coronation Street.” Ian asks Denise to move in with him on “EastEnders.” Moira worries about what will happen to her son on “Emmerdale.” Freddie gets a gun shoved in his face on “Hollyoaks.” Marilyn gets dragged back into a triangle with Winston and John on “Home and Away.” And Georgia decides she can’t give up nursing on “Neighbours.”

Coronation Street:
Spoiler alert: Karl starts to come apart at the seams as the cops question him concerning Craig’s sudden disappearance. The cops aren’t the only ones with questions either. Dev and Jason have quite a few for him themselves. Karl desperately tries to lie his way out of it so that he can make it down the altar with Stella. However, Dev is not about to let her marry the man he thinks murdered Sunita.

Sally’s relationship with Tim continues to make waves on the street. All of the aggravation is starting to get to Tim and he thinks of packing it all in. Sally frets that he will finish with her but fears that it’s inevitable. Meanwhile, Anna and Owen are impressed by how well Faye is doing now that she’s finally made a friend, who may not exactly be what she seems. And Owen makes a surprise offer to Audrey, who winds up living with Marcus and Maria, much to his chagrin.

EastEnders:
Spoiler alert: Roxy wants to keep Alfie but that could be hard with Ronnie back in the picture. Jack has a hard time keeping his distance from Ronnie and news of her release from prison doesn’t sit well with Alfie. Things get worse when he learns what Roxie is planning for the ex-con. That could spell the end for them, but their plans aren’t the only ones being overturned. Settling back in, Ronnie quickly learns that she and Roxy won’t be leaving town as planned.

Ian learns that Shirley knows his secret and turns to Carl to worry. Carl promises to take care of her. Meanwhile, Shirley leaves Walford and her prized possession behind. This confuses Jean, who is already dealing with the uncertain feelings between her and Ollie.

Following in the steps of Barbara Windsor (ex-Peggy), fellow “EastEnders” alum Larry Lamb (ex-Archie) will be doing a guest spot in Monty Python’s “Spamalot.” He will be appearing as God at the Playhouse Theatre in London during the week of September 2. For more information, please visit Spamalot Westend.

Emmerdale:
Spoiler alert: Steve makes a move on Nicola. She ponders it, but not for long. Pretty soon, she has a confession to make to Jimmy and has to face a bit of backlash. Meanwhile, Cain recruits Charity to help him with a heist. As that plan is rapidly running aground, Zak gets wind of what Amy has been hiding and lays into her over Kyle.

Those close to Ruby react to her plans to have a baby. Ali has a hard time dealing with it and Sean doesn't take the idea well at all. Ruby worries that the whole idea may not be realistic after all. And Debbie is left in shock after she hears a damning voice recording. She tips off Chas about what she thinks Cameron did. He begs her to go to the cops.

Former "Coronation Street" baddie Bill Ward (ex-Charlie Stubbs) will be joining the cast of "Emmerdale." He starts shooting material in September which will air near the end of October. Ward will be playing James Barton, a single father and farmer.

Hollyoaks:
Spoiler alert: Trent's father, Don, arrives, looking for answers about what happened to his son. He suspects that Sinead knows something about it. Plagued by guilt, Freddie decides to turn himself in to the cops. Sinead begs him not to. He refuses to listen. She realizes this could come back on her so she rats Freddie out to Trevor, who promptly gags him, throws him his trunk and drives him off.

Take a look at the final big week of summer shows on "Hollyoaks."

Home and Away:
Spoiler alert: Ethan attempts to stop Zac and Hannah from tracking down the twins. Zac continues looking for help anyway, but his desperation ends up throwing Leah in the middle. He and Hannah talk her into helping out with Oscar, but she's not thrilled to do it.

Brax attempts to save Casey. He's not the only one. Ricky turns to Tamara and begs her to help out. Meanwhile, Maddy is busy standing up for Josh while Spencer is acting off-kilter and really freaking Sasha out. Chris knows why Spencer is showing his dark side, but he's more concerned about how he can win Irene over.

Neighbours:
Spoiler alert: Although she's disturbed enough by Lucas' gambling problem to walk away from him, Vanessa has an even harder time when someone walks back into her life. When someone from her past returns, Lucas feels he's lost her for good. But Vanessa still has a hard time making her choice. Meanwhile, Amber decides that things have been progressing too fast with Joshua and they need to take it slowly.

While half of Mason's mind wonders whether or not he will be able to get Kate back, the other is still pondering Robbo's demise. He accuses Josh of snuffing him out. At the same time, Lauren confesses the truth about the email she sent to the dead men while Brad and Terese unearth more evidence in the case. Terese still manages to find the time to get on Paul's case about shoving everyone away and urges him to admit he has a connection to Marty.

Are you burning up about something that has been happening on one of your favorite soaps right now? Soaps.com wants to know what it is. Make sure that you cast a vote in this week's Soap Opera Polls. And then discover what happened after Daniel lashes out at JJ on DOOL.