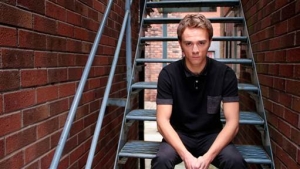 Tina tries to move on but Jake’s party makes that hard on “Coronation Street.” Janine and Michael are forced to unite for Scarlett’s sake on “EastEnders.” Debbie and Cameron have to work together to cover their tracks on “Emmerdale.” Dr. Browning comes to his breaking point on “Hollyoaks.” Harvey tries to make things right with Sally and Pippa on “Home And Away.” And Callum finds a new girl to lust after on “Neighbours.”

Coronation Street:
Spoiler alert: David manages to get his brother on the road trip from Hell. Unable to contain his anger anymore, David takes it out on Nick. When it looks like Nick could be a goner, his brother starts to worry that he may have gone too far. Back in Weatherfield. Leanne panics and calls the police.

Peter tries to give Tracy some advice, but it’s not long before Rob shows up with some choice words for the bookie. Meanwhile, Lloyd and Mandy’s relationship continues to hit the skids when he starts to think that she’s something of a snob. And Norris has a severe overreaction when a paperboy seems to have gone missing.

EastEnders:
Spoiler alert: As soon as Max is back, he’s getting ultimatums from Kirsty. After being stuck in a compromising position, his daughter starts ordering him around. Kirsty is left attempting to save her relationship with Max when it looks like she could have to sacrifice it. She winds up getting some help from someone unexpected.

Booty’s will open again. The place has been bought up by Sadie, who immediately annoys all of the local women by flirting with their men. Meanwhile, Lucy and Billy give their all to try and bowl Janine over with their skill as employees. Lucy manages to stumble on evidence that Ian has been ripping Janine off to give cash to Carl and is faced with the dilemma of whether or not to rat him out.

Fan fave Michael French will be returning as David Wicks to settle some unfinished business. He will begin shooting new material this summer.

Emmerdale:
Spoiler alert: Rhona winds up in the hospital after taking a new drug. While she’s in care, Vanessa decides to tell Paddy that Rhona has been seeing someone else. That’s not the only relationship getting rocky. Jacob is quick to notice that Alicia seems to find the idea of moving in with Dom pretty dodgy. Sharing space quickly causes the tension to rise between them.

Laurel stalks the man she assumes to be her carjacker. When she arms herself and heads for his place, Marlon gets wind of it and rushes to stop her before it’s too late. Meanwhile, Eric discovers the truth about Amy’s son, Kyle. It turns out that his adoptive parents are dead. When Amy hears of this, she has an important choice to make.

Hollyoaks:
Spoiler alert: Sandy's latest romance hits a bit of a dip. Not only do her sons not approve, but she gets an eerily unexpected bunch of flowers dropped in her lap. The romance isn't going smoothly elsewhere either. Carmel keeps trying to get closer to Jim but he is clearly keeping some secrets. When she tells him straight out how she feels, his reaction could surprise her. Meanwhile, Ziggy may have to break someone's heart if Joe gets his way.

While Myra is in the hospital recovering after being attacked, Tony is down the hall suffering. He and Ste have a heart to heart which could leave Tony to deal with his next round of chemotherapy all alone. And things could be looking grim for some other people around town if Sienna has her way. But her plans might face a serious problem when Nancy returns.

Home and Away:
Spoiler alert: Roo worries that Maddy and Casey are getting too close. Their friendship is pushing them both in a destructive direction. Ricky and Brax try to step in and get Casey to stop drinking but he's not easy to get through to. Meanwhile, Tamara has her memory back, which means that she's realized that she's in love with Casey... but she's also in love with his brother Kyle.

Romantic awkwardness continues for Spencer and Sasha as they try to figure out where they stand in their recently resurrected relationship. And a different awkwardness reigns across town. Dr. Bradley still doesn't like April. Not even remotely. She and Dex decide to try and use some therapeutic techniques to try and get over this awkwardness. She attempts to prove herself to the doctor, but it could be harder than she thinks.

Neighbours:
Spoiler alert: Amber's relationship with Robbo can't stay a secret for long. Too bad the news of it will come out just as she's trying to end things with him. Robbo's got more on his mind though, like dealing with Mason, who still owes him money. Mason has to make some desperate plans to pay him back. Robbo distracts himself by intimidating the Rebecchis.

Lucas is also having trouble. He attempts to resist his impulse to gamble his way out of his latest problems. But he's not nearly as aggravated as Joshua is when Paul offers Hudson a new deal. Josh's life is also a mess. Imogen bears the brunt of the blame for him splitting up with Amber. The pressure is overwhelming Imogen. She is in denial about the fact that she has an eating disorder, though Susan finds it hard to ignore.

Take a trip behind the scenes with Christopher Milligan (Kyle) while he shoots a scene with Ashleigh Brewer (Kate).

Got an opinion about what's been going down on your favorite soaps right now? Soaps.com wants to know what it is. Be sure to vote in our Soap Opera Polls. And then find out who Lauren stabbed on "Y&R" in our Soap Opera Summaries.