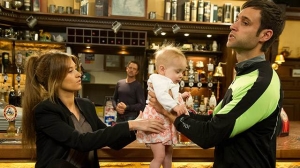 Gary is anxious about bonding with Jake on “Coronation Street.” Michael and Danny battle for Janine on “EastEnders.” Cain gets confirmation of his suspicions on “Emmerdale.” The summer could get violent on “Hollyoaks.” John has a new job on “Home And Away.” And Karl wants full custody of Holly on “Neighbours.”

Coronation Street:
Spoiler alert: Paul’s attempt to make things better with Lloyd backfires. After the fireman blows up at him again, he’s forced to offer yet another apology. He’s not the only one getting apologetic. Jenna and Sophie make amends to each other and get back together, much to Mandy’s chagrin. And the entire situation is starting to take a toll on Lloyd and Mandy’s relationship.

While Stella is offering to help Leanne with her problems, David continues to make them worse. He moves ahead to the latest step in his big revenge plan. David gleefully watches as Leanne digs for the facts while Kylie and Nick come apart at the seams.

EastEnders:
Spoiler alert: Whitney makes a desperate move. Although she may get away with it, the guilt she feels weighs heavily on her. She’s left fighting to hold onto her relationship. Hopes of it surviving sinks as Tyler and Joe brawl. As she faces danger, Kat and Bianca may have to team up to help her. That may not happen since their relationship is deteriorating fast. Kat tries to deflect from her disgust at Roxy and Alfie’s engagement by throwing herself at Carl.

Lucy gives Ian a call. He’s thrilled until he finds out why she actually wants to meet him. After she’s ruined his day by revealing her secret, she’s left to have a crummy day of her own when she heads to work. The new position isn’t what she thought it would be.

“EastEnders” star Barbara Windsor (Peggy) will be appearing as God in the new West End production of Spamalot starting on August 5. Get the details at Spamalot.

Emmerdale:
Spoiler alert: Debbie continues having a hard time facing reality. The guilt eats her up. Cameron worries that it will become too much for her, especially when she starts suggesting that it is time to come clean. Meanwhile, Vanessa tries to put her differences with Rhona behind her. Rhona isn’t entirely receptive or honest. As she rushes off to meet her dealer, Vanessa is left to make a confession.

Nicola is annoyed when her plans to get rid of Steve go awry. She watches as Steve and Jimmy inch closer. Steve is sure to tell her that he will be sticking around so she threatens to expose what she knows about him. He's got another trick up his sleeve and decides to enlist Bernice's help to manipulate Nicola some more. And David manages to get Nikhil to open up after his attitude to baby Molly worries his family.

Hollyoaks:
Spoiler alert: Ste's plans to leave the village with Sinead are sidetracked when he goes to see his terminally ill mother. Shocked by how cancer has ravaged her, he helps her move into a new flat and discovers evidence of his father's devotion to him. He's even more shocked when his mother asks him to help her die.

Phoebe finds herself in the middle of Dr. Browning's latest scam. She turns to him for cash when she needs to get a friend a fake passport. The doctor decides to bilk an old woman out of her money by trying to pass Phoebe off as her long-lost granddaughter. Although she feels bad about it, she agrees to go along with it anyway.

Get a preview of what's ahead for the rest of this summer on "Hollyoaks."

Home and Away:
Spoiler alert: Jett and John have to face the fact that they are swamped in debt and leaving town to find work may be the only option left for them. They are not the only ones contemplating a move. After being rejected by Spencer, Sasha thinks it might be time for her to leave Broken Hill behind. However, Maddy is sure that Spencer still has feelings for Sasha and tries to put them back together. That plan may change after she falls under the influence of Casey.

Casey's shadow is thrown over the upcoming trial. Tamara is terrified of what he will do if she testifies. Ricky tells Brax how gloomy things are looking and she resigns herself to what's to come. When Tamara takes the stand, her memories come flooding back. But Ricky's fate remains in the hands of Casey when he takes his turn speaking at the trial.

Neighbours:
Spoiler alert: Lucas and Paul wrangle over the price of number 32. Lucas is just about to agree to his offer when Paul decides to buy a different house instead. Lucas' week is full of further complications when Vanessa guesses that she is pregnant. As they attempt to digest this. Their financial problems get even worse and Lauren has a hard time hiding how disappointed she is in them.

The Willis' marriage hits some problems after Brad gets an offer from Hudson. He's not the only one causing trouble. Paul has plans to get his revenge on Robbo. While Robbo is distracted with his attempts to charm Amber into his arms, Paul sets him up to take a fall.

What's your verdict on the latest soap opera stories? Soaps.com wants to know what you think so be sure to vote in our Soap Opera Polls. And then take a little trip back in Daytime's past with our Soap Opera History: The Doctors.