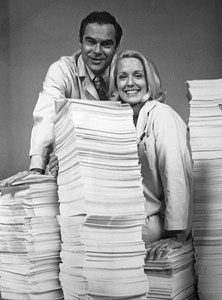 Premiering on the exact same day as rival “General Hospital,” NBC’s “The Doctors” aimed to grab more eyeballs than there were in Port Charles with racier storylines and more cutthroat antics. And it worked – for a while at least. Ratings were strong by the late 60s, thanks to prime airtime between hit shows “Days of Our Lives” and “As the World Turns.” But in the mid-70s, ratings began to fall and after 16 years in the same time slot the network began moving it around, shedding viewers with each adjustment.

When the show was canceled in 1982 it broke the record for the lowest level of ratings any soap had ever reached in the history of the rating system, and the last episode aired just a few months shy of its 20th Anniversary on New Year’s Eve 1982.

The story:
When the show premiered, it was not a serial and was never intended to be. Rather, each episode revolved around a singular medical emergency plot with a resolution. It soon switched to a weekly serial format, and by 1964, the 30-minute show had transitioned to a full-fledged Daytime serial.

“The Doctors” worked hard to beat its “General Hospital” rival. There, doctors worked together for the most part. But at Hope Memorial Hospital in the fictional New England town of Madison, the doctors were cutthroat and ruthless despite the show’s tagline that it was “dedicated to the brotherhood of healing.” Murder, suicide, backstabbing, torment and drug use were commonplace in the halls at Hope Memorial.

The central character was Dr. Matthew Powers (James Pritchett), chief of staff. While he healed patients he was not all good. At one time he went on trial for murder. Another time, a nurse discovered he killed his rival and made it look like suicide. After much torment, she killed herself and he got away with murder, again. Another medical-focused storyline involved a youth serum.

Death by timeslot:
For 16 years, "The Doctors" had the benefit of airing at the same time every day at 2:30 PM EST. Maintaining a solid timeslot was practically unheard of in an era littered with Daytime serials all switching networks and changing their length of airtime.

But that all changed when the ratings began to tumble in the mid-70s, going from fourth to eleventh place in the ratings when it was up against "One Life To Live" and "Guiding Light" as they each expanded to one hour. At the same time, NBC extended its own soap opera "Another World" to a whopping 90 minutes, bumping "The Doctors" again to 2:00 PM in 1979. The next year the show was moved yet again, jumping to 12:30 PM. This pitted it against the younger and hipper "Ryan’s Hope" and "Search For Tomorrow." In addition to that blow, some affiliates across the country didn’t even air serials during that hour so local news could air instead, and many remaining fans were left without the show at all. In 1982 it was moved again, this time to 12:00 PM, eliminating it from even more markets. If it was shown, it was up against "The Young and the Restless," which was on the rise and gaining major steam.

In just three years, "The Doctors" went from a respectable 6.1 to an abysmal 1.6 in the ratings – the lowest in the history of soaps and ratings. The final episode aired on December 31, 1982.

The Doctors Trivia:
* "The Doctors" won one Primetime Emmy and three Daytime Emmys, including Best Daytime Drama in 1972 and 1974, Best Actress for Elizabeth Hubbard (Dr. Althea Davis) in 1974 and Best Actor for [James] Pritchett in 1978. It was nominated 17 times.

* "The Doctors" was filmed at NBC Studios at 30 Rockefeller Plaza in Manhattan, New York.

* A proposed spinoff called "House of Hope" was passed over by NBC in 1970 in favor of "Somerset," which was a spinoff of "Another World."

Can't get enough soap history? Read up on another one of our favorites, Soap History: Loving.