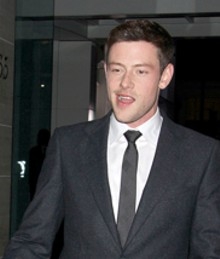 This week in celebrity news there was another very sad, addiction-related death, Lindsay Lohan struck a deal, Kim Kardashian spoke out for the first time since she became a mom, and more…

Glee’s Cory Monteith dead at 31.
Cory Monteith, who played Finn on “Glee,” was found dead in a Vancouver, BC hotel room on Saturday July 13. The actor, who had completed a stint in rehab back in the spring, was reportedly at home visiting family while lady love, Lea Michele (Rachel, “Glee”) vacationed in Mexico. Canadian authorities expedited the autopsy and toxicology results, which confirmed that Monteith perished following an accidental overdose involving heroin and alcohol. Michele has reportedly been grieving with Monteith’s family and planning a funeral. Monteith was cremated in Canada on Tuesday July 16 following a private viewing. Word of the actor’s death spread quickly on social media with fellow entertainers taking to Twitter to react:

Speechless. And for the worst reason.

I am totally heartbroken right now. I love Cory so much this hurts my heart.

Blue!
Josh Duhamel (“Safe Haven,” “Las Vegas,” ex-Leo, “All My Children”) revealed on “Live With Kelly and Michael” that he and wife, Fergie, who announced this week she will take Duhamel’s last name, are expecting a boy. While playing a round of ‘Do or Don’t’, Duhamel selected a blue onesie when offered a choice between blue and pink by Kelly Ripa. Watch a clip of the reveal below:

Charlie Sheen a grandfather.
Yep, Charlie Sheen officially became a grandpa when his eldest daughter, Cassandra Estevez, gave birth to a baby girl named Luna on Wednesday July 17, according to TMZ. Estevez, who is married to Casey Huffman, is 28 years old. She is Sheen’s daughter by his high school love, Paula Speert.

Engaged to an angel.
Maroon 5 frontman and The Voice judge, Adam Levine, proposed to on-again girlfriend, Behati Prinsloo. The couple had just got back together following a split during which time Levine had allegedly been dating another model. Prinsloo is a Victoria’s Secret Angel model. Levine’s rep told People, “The couple recently reunited and Adam proposed this weekend in Los Angeles.”

Halle Berry married.
Halle Berry (“Die Another Day,” “Catwoman”) married Olivier Martinez (“Blood and Chocolate,” “Unfaithful”) on Saturday July 13 at the Chateau des Conde in Vallery, France. Berry has a daughter, Nahla, age 5, with male model Gabriel Aubrey, and she is expecting a son with Martinez in the fall.

Emma Roberts domestic incident.
Authorities in Montreal allegedly visited the hotel room of Emma Roberts and boyfriend Evan Peters (“American Horror Stories”) due to a domestic incident early in July, which resulted in Roberts being hauled off to the police station. A statement obtained by TMZ said, “It was an unfortunate incident and misunderstanding. Ms. Roberts was released after questioning and the couple are working together to move past it.” Emma Roberts is Eric Robert’s (“Ugly Betty,” ex-Vance, “The Young and the Restless”) daughter, and niece to Julia Roberts (“Erin Brockovich,” “Pretty Woman”).

Kim Kardashian's message.
Since the birth of her daughter, North West (Nori), with rapper Kanye West, Kim Kardashian ("Kourtney and Kim Take New York," "Keeping Up With The Kardashians") has been quiet and stayed out of the public eye. Kardashian finally broke her silence on Wednesday July 17 to post a message to her fans on her blog. It read: "Hey guys,These past couple of weeks have been filled with the most exciting experiences of my life. I’m enjoying this time to fully embrace motherhood and spend time at home with my family. I’ve been reading all of your messages and want to thank you all for your sweet thoughts and best wishes. It truly means everything to me. I am so blessed to have the support of my family and fans in this beautiful moment. Xo With love, Kim"

Lindsay Lohan lands OWN interview and reality series.
Hoping to repair her image, Lindsay Lohan has made a lucrative deal with the Oprah Winfrey Network (OWN) to do an interview and also star in a six-episode reality docu-series about her life. Watch the video clip for more details:

Kelly Osbourne engaged.
Kelly Osbourne, daughter of Sharon ("The Talk") and rocker, Ozzy Osbourne, is engaged to her boyfriend, Matthew Mosshart. She revealed to Hello! Magazine that Mosshart popped the question while they were vacationing in Anguilla. The pair met at model Kate Moss' wedding in the summer of 2011.

Keibler denies rumors.
Not long after news broke of the Stacy Keibler and George Clooney break-up, Keibler made an appearance on "Good Morning America" during which she denied that a desire on her part for marriage and babies was the reason for the split. She confirmed that they parted ways amicably and that they remain friends.

Randy Travis update.
After his viral cardiomyopathy led to a stroke and brain surgery, Randy Travis' doctors released an update advising that the country star remains in critical condition, but has stabilized. They went on to say he is breathing with the help of a ventilator, but is being weaned off. The swelling in his brain is decreasing and he was described as being alert. Travis has been interacting with visitors and even doing some physical therapy. The doctors expect that he will remain hospitalized for another two to three weeks. In related news, Travis' brother, David Traywick, was arrested in North Carolina after authorities allegedly found a working methamphetamine lab inside his home. He and his wife, Jessica Traywick, were charged with conspiracy to traffic meth.

Tina Turner weds.
73 year-old Tina Turner married her longtime partner, German producer Erwin Bach, in a civil ceremony in Switzerland earlier this week. The pair plans to have another Buddhist ceremony this coming weekend, as well as a celebration that will include the likes of Oprah Winfrey and David Bowie. Turner has lived with Bach in Switzerland for 18 years and gave up her US citizenship back in April.

Leah Remini leaves Scientology behind.
Leah Remini ("The Talk," "King Of Queens") made news this week by announcing that she was leaving the Church of Scientology. Remini, who had been a member for over thirty years, issued a statement to People after the announcement: "I wish to share my sincere and heartfelt appreciation for the overwhelming positive response I have received from the media, my colleagues and fans."

Read Soaps.com's Pretty Little Liars Recap: Under The Gun to find out who went to Ravenswood. Find out whose marriage plans hit a snag on Emmerdale.