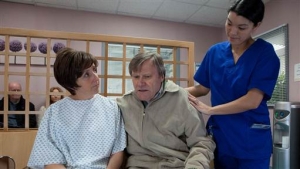 Nick starts to lose it as David goes ahead with the latest step in his revenge plot on “Coronation Street.” Dot and Cora battle it out over a frying pan on “EastEnders.” Sean has a confession to make on “Emmerdale.” John Paul’s latest adventure in love could be over before it begins on “Hollyoaks.” Zac tries convincing Heath to stick by Bianca on “Home and Away.” And it’s a week full of fights on “Neighbours.”

Coronation Street:
Spoiler alert: Carla reaches out to Hayley when she notices how much she could use some support. Hayley still hasn’t come clean with Roy about her condition. Her silence is starting to get to him. He finally blows up at her, but has an even harder time dealing with what she’s been hiding. Meanwhile, Rob and Tracy announce the plans which they have been hiding. This infuriates Carla. Getting desperate, she turns to Peter with a plan of her own. What happens next leaves Michelle in shock.

Residents of the street continue giving Paul a hard time over what he said to Lloyd. Sally and Sophie dig into the arguments thanks to their sympathies with Jenna. When Sophie badmouths him in public, Paul blows up at her and then has to face the wrath of Sally.

EastEnders:
Spoiler alert: Jean has a hard time dealing with the pressure of a date and her guilt. Ian is dealing with his own guilt. He’s more rattled than usual and it has Bianca worried. Things get more complicated thanks to Tiffany and Bobby loving it up. And Bianca’s bad week gets worse as Whitney is pushed to confront her demons thanks to a message from someone in her past.

Shirley finds herself in some more trouble. She and Denise are thrilled when someone they were not expecting winds up offering their help. Meanwhile, Sharon tries making things a little easier for Dennis. But deciding to let him off the leash a little is a choice she quickly regrets.

Emmerdale:
Spoiler alert: Cameron's plans to marry Chas hit some more problems. Gennie is determined to stop it and has the ammunition to do it after eavesdropping on him trading confessions with Debbie. It's not long until they realize that they've spoken too much and Gennie is on to them. The consequences of this are quick to come and Nikhil is left in a panic when Gennie seems to be missing.

When Victoria attempts to heal her rift with Betty, she only succeeds in making things worse. After a bit of a barny, Betty starts to back down. Meanwhile, Kerry continues trying to get Sean to warm up to her by convincing Declan to hold a charity tournament. Sean isn’t impressed and accuses her of stealing money from the event. In spite of this, they wind up getting close when he gets into some trouble.

Hollyoaks:
Spoiler alert: Fearing that his girlfriend, Ash, may be close to figuring out that he knocked off Texas, Will contemplates killing her too. Ash starts to look after his mom, who endlessly rambles and incidentally explains her connection to the Savage and Blake families. Getting wind of this, Will decides to take her somewhere secluded to shove her off a cliff.

Will isn't the only character haunted by his past. Lynsey is back from the dead to harass Dr. Browning. Take a look behind the scenes of her return.

Home and Away:
Spoiler alert: Indi and Dex throw a party with results they weren't exactly expecting. After a day of listening to Brax badgering him about Ricky, Casey gets drunk and plants a kiss on Indi. In spite of this awkward situation, she still wants to help him out when she realizes he needs it.

Tamara's memories continue to slowly return. She tries not to face them, but that's hard, particularly with Kyle around. They both worry that the return of her memories might not be good for them. Meanwhile, Maddy tries to be friends with Spencer again, but that quickly hits a snag.

Neighbours:
Spoiler alert: After Chris and Hudson decide on a fresh start, Joshua is offered Hudson's sponsorship deal. Not everyone is being so successful. Matt's plans to keep Amber away from Robbo blow up in his face. Mason and Imogen are worried that Robbo may have been trying to blow them up when something goes wrong with the car. It turns out the fault is actually with Mason. And Robbo stays busy driving Sonya to the point of a breakdown.

Although Kate does her best to keep her diagnosis to herself, she still manages to get some support from Georgia, even if that means coming between her and Kyle. Meanwhile, Lucas struggles financially as Paul moves into his new place and Karl asks Holly to move in with him permanently.

How do you feel about what happened on Daytime last week? Do you think that Theresa can give JJ a run for the money as Salem's most prominent problem child on "DOOL?" Let Soaps.com know by voting in our Soap Opera Polls. And then find out how Kyle reacted to learning he has a sister on "Y&R" in our Soap Opera Summaries.