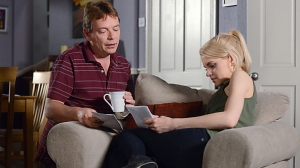 Things continue to look down for the doctor. (E4)

Hayley gets some disturbing test results on “Coronation Street.” There is a nightmarish round of speed dating on “EastEnders.” Dan and Kerry get matching tattoos on “Emmerdale.” Someone is stabbed on “Hollyoaks.” Rosie prepares to leave “Home and Away.” And Vanessa tries talking Lucas out of selling the apartment on “Neighbours.”

Coronation Street:
Spoiler alert: Rob is thrilled to find Peter and Carla brawling over the latest mess at the bookies. After he taunts his sister, she pushes back at him. Tracy is also doing some pushing. Rob is amazed by how far she will go to get her own back. He tries to keep up with her deviousness. Of course, all of this is horrifying to Deidre.

Lloyd and Eileen’s friendship has some serious problems as he continues to react to Paul’s racial outburst. Eileen takes some desperate measures to try and bring some peace back into their lives. And Norris’ lust for power could finally be fulfilled.

EastEnders:
Spoiler alert: The pressure of having to choose between his business and family pushes Ian to the breaking point. Denise cracks out a plan to try and save him. That quickly fizzles and she’s left to desperately ask someone unexpected for help. Denise may be less interested in helping him out, however, when he is caught trying to use Bobby’s birthday to manipulate everyone.

Kat tries putting Jean in a good mood. That’s no easy feat and it doesn’t last. Meanwhile, Roxy is already in a good mood after snooping around in Alfie’s mail. He’s in a foul mood though and decides to spend his time interrogating Jean’s latest date. After he breaks some bad news to Kat, he has a startling offer for Roxy.

Emmerdale:
Spoiler alert: The trauma of being carjacked continues to keep Laurel on edge. Marlon worries that she may be losing it altogether, especially after he hears that she went after the carjacker herself. Still desperate to get the guilty party, Laurel manages to trick Paddy into helping her. He needs something to do since Vanessa manages to manipulate Rhona out of going on a trip with him so she can do something with her instead.

As Dan does his best to keep his big secret, Bob decides it’s time to make an honest woman out of Brenda and pops the question. Just to show everyone that they are serious about it, she asks him to move in with her. And Gennie starts pushing Nikhil to buy the B&B.

Hollyoaks:
Spoiler alert: Diane's dishonesty could come back to haunt her but for now it will be Ste and Sinead having to deal with the mess she's helped cause. As Tony tries to get things clear with Diane, Ste discovers that things are looking even worse for him when an old enemy returns.

Dr. Browning entertains more desperate ideas about how to deal with his stalker. Inspired by something Ste said, he cobbles together a plan that only manages to make things even worse. Meanwhile, Sienna's plan to split up the Osbornes continues to unfurl. As she tries to stay on top, Maxine attempts to impress Patrick but he ends up lashing out at her instead.

Home and Away:
Spoiler alert: As Pippa gets a special tour of the bay courtesy of Sally, Roo wonders what Sally is really up to. No one's sure what to do with Casey. Brax tries to get through to him while Tamara and Kyle fail miserably to do the same thing. Meanwhile, Sasha and Spencer's attempt to have sex fails when Maddy interrupts. Sasha starts to feel like she's trapped in a triangle. And Bianca races after Holly and Zac as they face unexpected danger.

Take a look at the recent returns and fresh faces headed to "Home and Away."

Neighbours:
Spoiler alert: Robbo heads back to Erinsborough and chaos follows. Just as Josh has figured out that he still wants Amber, she has to deal with her lingering feelings for Robbo. However, Robbo has more on his mind than just getting between Josh and Amber. He puts Mason in an awkward position as he attempts to convince the Turners that he's actually turned over a new leaf. The act isn't working, especially when he starts threatening Sonya.

Kyle and Georgia's relationship faces some serious problems thanks to Kate. She tells them that she is pregnant. Unfortunately for her, it turns out that she isn't, but there is something seriously wrong with her.