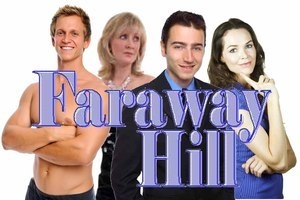 Many fans may not realize this, but “Faraway Hill” was the first soap opera to be broadcast on an American Television Network. It debuted as a half-hour show on the DuMont Television Network on October 22, 1946 and ran for only two months through December 18, 1946. The basis of the soap surrounded Karen St. John (Flora Campbell), a widowed New Yorker, who packed up and moved to a small town in order to be close to her relatives.

Now, sixty-seven years later, author James A. Richards has written a fiction trilogy titled Faraway Hill as a way to re-invent the soap. Each chapter is labeled as an episode and includes a cliffhanger, climax or revelation.

Of the novels, Richards told Soaps.com, “I grew up learning about TV history as a hobby which led to my majoring in TV/Radio in college. After my first novel – which was very dark and serious – I wanted to write something that is just plain fun. Combining these interests led me to write Faraway Hill.”

Read Soaps.com’s new OLTL Recaps, as well as the new AMC Recaps, two for each – new this week!