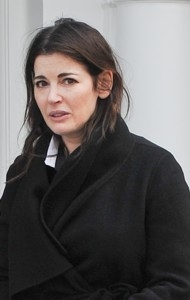 This week in celebrity news, there are break-ups, a court appearance, weddings, and more…

Nigella Lawson’s marriage ending.
Following an incident in a public place, in which Nigella Lawson’s (“The Taste”) husband, Charles Saatchi, was photographed with his hands around her throat, Saatchi has filed for divorce. British police issued a caution to Saatchi, and Lawson moved out of their London home following the incident, but Saatchi maintained it was a ‘playful tiff’, and was reportedly disappointed that Lawson didn’t defend him afterward. UK media is reporting that Lawson has reached out to Sir Paul McCartney’s former divorce lawyer, Fiona Shackleton, who is also her cousin, in the wake of the announcement.

John Mayer and Katie Perry ‘on’ again.
At a recent concert in Milwaukee, John Mayer serenaded on-again love, Katy Perry. The pair, who also spent the Fourth of July holiday together, was at the Marcus Amphitheatre for the kick-off to Mayer’s tour. As Perry watched from the mixing board area, Mayer dedicated “A Face To Call Home,” to the pop songstress, who, according to People, he credits with helping him, and continuing to get to know him, throughout a crisis involving his vocal cords.

Kerry Washington’s secret nuptials.
It looks like Kerry Washington is equally as media savvy as Olivia Pope, the character she plays on the PR-related series, “Scandal.” Washington not only managed to keep her dating life out of the public arena for almost a year, but she even married the guy, San Francisco 49er’s Nnamdi Asomugha, secretly on June 24. The news of the nuptials didn’t even break until the following week! Congratulations to the happy couple.

Bieber pees publicly.
Canadian-born singing sensation, Justin Bieber, is once again in the not-so-forgiving spotlight after a video surfaced of him on TMZ urinating in a restaurant mop bucket. The Beebs had this to say about the incident on Twitter:

In life u will make mistakes and people will try and tear u down…but u gotta stay positive. Stay strong..and learn to be better..and..

Watch the video on TMZ of Justin Bieber peeing in a mop bucket.

Eva Longoria in love again.
“Devious Maids” actress, Eva Longoria (ex-Gabrielle, “Desperate Housewives,” ex-Isabella, “Y&R”) has gone public with the news that she’s in a new romance with Ernesto Arguello. The duo met and initially became friends when Arguello, a Honduran native, was cast in “Ready For Love,” a reality series that Longoria produced last year. Here’s a twitter photo and tweet she shared:

Randy Travis undergoes heart surgery.
Grammy award-winning country singer, Randy Travis, was hospitalized with viral cardiomyopathy, a heart condition caused by a virus that can lead to heart failure, over the weekend. He was then required to undergo a surgery in which doctors inserted a device to help his heart pump blood. He was transferred to The Heart Hospital near Dallas from McKinney, Texas, where his physician, Dr. Michael Mack, issued a statement that Travis had stabilized and has shown signs of improvement. Update: Travis underwent brain surgery Wednesday night following a stroke. He remains in critical condition. Fellow country singers tweeted get-well wishes:

Thinking about my friend, @randytravis, tonight. Hope he gets better soon…

Sending healing strength and love to you this morning @randytravis -KU

Mariah Carey hospitalized.
Singing superstar, Mariah Carey (The X Factor), wound up in a New York City hospital on Monday July 8 after dislocating her shoulder and cracking a rib on the set of her latest video. Carey was taping a promo for the single ‘Beautiful’ with rapper Young Jeezy, which was directed by her husband, Nick Cannon (“America’s Got Talent”), when she slipped and fell. While in the hospital she posed for photos with her shoulder sling and her representative issued a statement saying she is fine. She is expected to go ahead with her scheduled performance at a Hurricane Sandy relief concert on Saturday July 13.

Royal baby's title officially announced.
A royal title has been selected for Prince William and Kate Middleton's first child, due this coming weekend in Britain. Buckingham Palace put out the official word that the newborn will, depending on the sex, be His or Her Royal Highness the Prince or Princess of Cambridge. Anticipation for the baby's arrival is at fever pitch in England.

Amanda Bynes back in court.
Actress Amanda Bynes ("She's The Man," "All That") was in court Tuesday July 9 to face charges of reckless endangerment, tampering with evidence and criminal possession of marijuana following an incident back in late May when cops were called by security because Bynes was allegedly rolling and smoking joints in her New York apartment building lobby. She later allegedly threw a bong from her 36th floor window in full view of law enforcement officers. Bynes showed up for the brief appearance in an attention-getting teal wig and track pants. Her next scheduled court appearance is September 26.

Seth Meyers engaged.
US Weekly reported that "Saturday Night Live's" Seth Meyers, who is set to take over "Late Night" from Jimmy Fallon, recently became engaged to his longtime girlfriend, Alexi Ashe. The pair had been dating for several years.

Farrah Abraham asked to leave rehab.
"Teen Mom's" Farrah Abraham was reportedly kicked out of the 10-day rehab program she entered voluntarily. She was threatened with removal from the program just a few days into her stay after being difficult in group therapy and making diva-like demands, but was given a second chance. Unfortunately, according to a Radar Online source, Abraham allegedly invited a member of the paparazzi into Lukens to take photos of her, which was the last straw. Abraham will still graduate from the program despite logging fewer than the expected 10 days.

Jonas brother and wife expecting.
"E! News" is reporting that Kevin Jonas of Jonas Brothers ("Hannah Montana") fame, and his wife, Danielle, are expecting their first child together. The pair married in 2009 and are featured in the television program, "Married To Jonas."

George Clooney and Stacy Keibler split.
George Clooney ("Oceans Twelve," "ER") and Stacy Keibler, who was a pro on "Dancing With The Stars," have gone their separate ways as of a few weeks ago, according to People. Reportedly it was Keibler who put the kibosh on the relationship, knowing that serial monogamist, Clooney, wouldn't be up for marriage and babies. The pair dated for about two years.

Brandi Glanville's drunken over-exposure.
Brandi Glanville ("Real Housewives of Beverly Hills") hit the headlines after being captured on film as drunk as a skunk and suffering a massive wardrobe malfunction. The paparazzi captured Glanville draped over a male companion in a transparent dress that was barely staying on, showing her breasts and her behind in black thong underwear. Following the incident, Glanville tweeted:

I got drunk with my gays its not murder,,everyone kept sending us drinks.I was being polite

Read Soaps.com's Pretty Little Liars Recap: Gamma Zeta Die to find out who got arrested. Find out why EastEnders' Roxy is in a good mood.