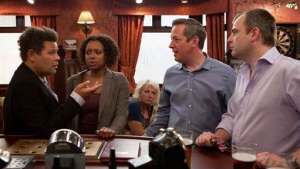 Racing after an empty pram. (e4)

Peter makes a move that leaves Carla worried he could be plunging into a new addiction on “Coronation Street.” Dexter gives Ava a dangerous ultimatum on “EastEnders.” Although she spots Cain in her stolen car, Laurel doesn’t tip off the cops on “Emmerdale.” John Paul gets distracted by Danny, the new supply teacher on “Hollyoaks.” Casey has to deal with Brax and Ricky’s relationship on “Home and Away.” And Ajay and Rani leave for India after receiving some horrible news on “Neighbours.”

Coronation Street:
Spoiler alert: David’s plan to ruin his brother’s life and marriage continues. He sets his sights on destroying Leanne’s new bistro and does his best to ignite quarrels between the couple. Meanwhile, a surprising conflict erupts when Paul blurts something out to Lloyd that leaves people horrified. Will he apologize?

Sinead continues to think that Chesney is not over his ex. Chesney is left to tell Katy what Ryan has been getting up to behind her back. She won’t be forgiving her new boyfriend, but will she be able to get some forgiveness from her old one? Sinead warns Chesney that he better make his mind up fast because she’s sick of his dithering.

EastEnders:
Spoiler alert: When Bianca places Jean in danger, Kat is furious. Bianca has more to worry about than mending a friendship though when Liam takes off before the court hearing can begin. She winds up getting some help from someone unexpected. Meanwhile, Michael tries to ingratiate himself with Janine again, but those plans hit a snag when Joey gets into the thick of things.

Ian has to think fast about what to tell the cops when they show up. He later manages to eavesdrop on a bit of lucrative information which could prove dangerous for someone in the square. He turns to Lucy for some help with his latest plan but their checkered past makes her question whether that’s a good idea or not.

Emmerdale:
Spoiler alert: While Steve is trying to get close to Nicola, Val and Pollard want to bring him and Bernice into their new B&B business. Meanwhile, things continue to look grim for Rhona. She stages a break-in at the vets and lets Pearl take the blame for it. But this scheme rapidly deteriorates and Rhona has to face Vanessa’s accusations.

After another bust up, Sandy tries to make amends with Edna. That may be easier said than done. Priya and Rachel are also working hard to try to mend their rift but that plan crumbles after they share a meal together. And Brenda tells Gennie it’s time for her to shave off her hair.

Hollyoaks:
Spoiler alert: Trevor wants a load of cash to kill Myra which leaves Dr. Browning scrambling. While he is convincing Ste to sell drugs to pay the bill, Freddie is just happy to find that the garage is still standing. However, it looks like it could wind up in someone else's hands. A bailiff pops by to take possession of it from Sandy, but Jack agrees to help her pay off her debt.

Annoyed with Darren and Nancy, Sienna drugs the latter and then shoves her baby's pram into oncoming traffic. Nancy gets hit by a car as she races to grab it. Her manic behavior leads to her drug problem becoming clear to Darren. Meanwhile, Sinead gets desperate for cash and takes a man up to her hotel room. She has no idea he's a cop. After she tries to rob him, will he arrest her, or pay her for sex?

Home and Away:
Spoiler alert: Dex feels guilty when he realizes that he may not have rushed to April's aid fast enough. She faces death after suffering from a nasty snake bite. He and Bianca are left praying that she pulls through. Meanwhile, Zac tries helping Natalie deal with her mother issues. That doesn't pan out well when Holly shows up, out for revenge. Zac is forced to clear his name again while Leah tries to figure out why Holly is acting so aggressive.

When her parents show up, Tamara is forced to make a big decision fast. Elsewhere, Maddy gets back to town, which causes some serious friction at Casey and Rosie's going away party. Maddy tries to get between Sasha and Spencer, warning Sasha that getting him into bed will never happen. However, when Sasha actually talks to Spencer, that warning looks like it could prove wrong.

Neighbours:
Spoiler alert: Hudson's secret comes out. Josh uses it to get out of his contract with Don and Chris dumps Hudson over it. Distracted by this, Josh bungles things with Amber. Imogen makes sure to make it worse by suggesting to Amber that Josh is chasing another girl.

Sonya comes to face the facts about what Walter is really like. That makes her feel awful and she makes a choice that is destined to make her feel even worse. While Walter's luck continues to go bad, things are looking up for Brad. He gets a new job offer. And Lucas and Vanessa think it's time to get a new apartment.

Got an opinion about what's been going down on your favorite soaps right now? Soaps.com wants to know what it is. Be sure to vote in our Soap Opera Polls. And then find out how unhappy Brooke's birthday wound up being on "B&B" in our Soap Opera Summaries.