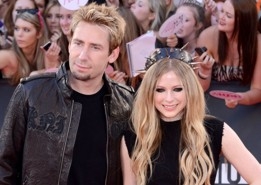 Paris Jackson refused treatment.
Michael Jackson’s suicidal daughter, Paris Jackson, was refused a transfer from UCLA Medical Center to a renowned facility in Utah. Reports say the facility was concerned about excessive media attention and paparazzi. TMZ reports that Jackson’s mother, Debbie Rowe, is seeking other options, while other family members are still hoping the out-of-state facility might reconsider.

Avril Lavigne and Chad Kroeger married.
Pop star Avril Lavigne tied the knot with rocker Chad Kroeger (Nickelback) on Canada Day, July 1, in the South of France, though reports initially flew that they had married on Saturday June 29 following this tweet from Mike Heller, who runs her talent company, which triggered a false alarm:

Studdard to Biggest Loser.
Ruben Studdard, who once claimed the coveted title of American Idol, has announced he will now attempt to become “The Biggest Loser.” Yes, Studdard, who became known as ‘The Velvet Teddy Bear’ will join the new season of NBC’s weight loss reality show beginning this fall in a bid to shed some serious pounds. The singer told People he’s hoping to avoid the worry of high blood pressure, diabetes, and heart-related issues that run in his family.

Alec Baldwin swears off Twitter.
After the hot-headed Alec Baldwin ("30 Rock") made headlines for attacking a Daily Mail journalist in tweets, and calling him a 'toxic queen', the actor not only deleted his Twitter account, but gave an interview to Vanity Fair in which he said he will never re-establish his presence on the social media site again. Baldwin also said he would love to quit acting and raise his next child outside of the celebrity spotlight. The Twitter rant came about after allegations were made that Baldwin's fiancee was tweeting inappropriately at James Gandolfini’s funeral. Baldwin later denied being homophobic and made a formal apology to GLAAD.

90210 mini-reunion.
Jennie Garth (Kelly) and Shannen Doherty (Brenda) were reunited with their former "90210" co-star Ian Ziering (Steve) when they visited him in Las Vegas at Chippendales, where he was finishing up his run as guest headliner. All accounts have the trio relishing the get-together, even posing for photos on the red carpet after the show. The girls also enjoyed the other Chippendale dancers, as evidenced by this tweet from Garth:

Deen's downward spiral.
Soon after news broke last week that The Food Network, Wal-Mart, and Caesars Entertainment had dumped Paula Deen, J.C. Penney, Target, Kmart, Sears, Ballantine Books, and Smithfield Foods also jumped on the bandwagon, kicking Deen to the curb following her admission in legal statements that she had used racial slurs in the past. She defended herself in this Deen interview with Today, and then retreated somewhat to spend the weekend focusing on celebrating her son's birthday. She tweeted:

Looking forward to some quality family time in honor of @jamie_deen's birthday. Have a blessed birthday, son! http://t.co/Z3Hb12nnfs

Deen's sons have rallied to support their mother in the wake of the scandal, claiming that she is not a racist person and that they were not raised in a home where racial slurs were used. Martha Stewart also leaped into the fray to express an opinion on Paula Deen's situation:

Farrah Abraham to rehab.
Teen Mom star, Farrah Abraham, who has also made a name for herself over a sex tape, is headed off to rehab in Florida following a DUI. Abraham's daughter, Sophia, will be in the care of her father during this time.

Eliza Coupe headed to divorce court.
On the heels of the news that ABC would not be renewing "Happy Endings," Eliza Coupe's (Jane) acting coach husband, Randall Whittington, has filed for divorce citing 'irreconcilable differences' as the reason. The pair, who wed on December 31, 2007, reportedly separated around their fifth anniversary.

Pierce Brosnan's daughter dead at 41.
Pierce Brosnan of "James Bond" fame, has lost his daughter to a battle with ovarian cancer. She was 41. Charlotte Emily died on June 28 in London surrounded by family, including her husband and two children. Charlotte's mother, Brosnan's late wife, Cassandra, also succumbed to ovarian cancer, as did her mother before her.

Glee's Morrison pops the question.
Matthew Morrison of "Glee" became engaged to his girlfriend of the past two years, Renee Puente, recently. The news broke at the White Tie and Tiara Ball in London where it was announced by Morrison's friends Elton John and David Furnish.

So excited to welcome my future son in law to our family!Congratulations Phil and Brooke on your engmt !! pic.twitter.com/VTMhvzLmFX

Hulk Hogan, notably, did not offer up congratulations on social media, leading to speculation that he may not be happy about the development.

Penny for your thoughts...
Though they haven't yet made their public debut, "Man Of Steel" actor, Henry Cavill, is dating "The Big Bang Theory's" Kaley Cuoco, according to People.

Read Soaps.com's Pretty Little Liars Recap: Face Time to find out who is suspected of killing Wilden. Get the scoop on whose secret comes out on Neighbours.