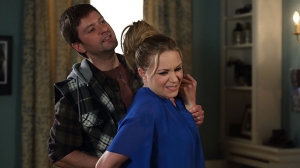 David tells Alicia how he feels on Emmerdale. (ITV)

The past comes back to haunt Sylvia on “Coronation Street.” Michael’s hopes for Scarlett are still cloudy thanks to Janine on “EastEnders.” David finally tells Alicia how he feels about her on “Emmerdale.” The bride gets brutally killed on “Hollyoaks.” Sonya gets the blame on “Neighbours.” And Adam is alive and looking for revenge on “Home And Away.”

Coronation Street:
Spoiler alert: Stella’s choices manage to make Owen her new enemy after she costs him a load of money. Meanwhile, Nick and Kylie discover that they have another enemy. It turns out that someone else knows about their indiscretion. The guilt starts eating away at him and she starts to worry about David’s strange behavior.

Izzy has a hard time shaking her suspicions about Gary’s feelings for Tina. It isn’t long before Gary actually manages to come clean about what’s been going on. And Audrey manages to unwittingly make life harder for Katy.

EastEnders:
Spoiler alert: Roxy is miffed when Alfie wants to keep their attempt at getting pregnant a secret. She soon has the chance to vent her anger when she has a run-in with Kat. Roxy has other problems to deal with, like looking after The Vic on her own when someone tries to rob it.

Ian’s new restaurant gets ready to open. There is no shortage of women competing for waitressing positions, but the new business venture hits a major problem.

Emmerdale:
Spoiler alert: Cameron isn't hiding how angry he is as he tours town making threats. He lashes out at Gennie so Nikhil runs off to complain to him about it. That only makes Cameron even more annoyed. Nikhil's not in a great mood either. He turns Rishi away when he wants to spend some time with his family. Rishi tries talking to Priya instead but she doesn't want anything to do with him.

Priya goes on the warpath. Ticked off after seeing David spending some time with Rachel, she starts to lay into her until Rachel can take no more and belts her in the gob. And Rhona's also in a foul mood. She snaps at Paddy and Vanessa but her problem could really be that she's been popping too many pills.

Hollyoaks:
Spoiler alert: Texas' wedding goes horribly haywire. The bride gets shoved from a balcony on her wedding day and falls to her death. Suspicion is quickly cast on Will, Dodger, Dr. Browning, Leanna and Theresa. Find out more in the video.

Home and Away:
Spoiler alert: Although Indi tries persuading April to get together with Dexter, the fact that he's been getting it on with Steph is a real turn off for her. However, that doesn't last and things look good for them. They don't look quite so good for Indi though. Roo warns her that hooking up with Chris is destined to go nowhere.

Lachlan's help manages to get Mullens charged with assault. He may not be the only one in legal trouble... Ricky gets evidence of Kyle committing a crime and then plants a gun at Casey's place.

Neighbours:
Spoiler alert: Lucy returns to Erinsborough and takes over at Lassiter's. Things are far less smooth going for everyone else. The Turner family crumbles and starts to look for help. Paul's life is also a disaster but he might not get any help from anyone about it.

Kyle saves Georgia's job but it could all be for naught since she is planning to head overseas, which would mean dumping her relationship. Meanwhile, Lucas and Vanessa face the fact that their relationship may have reached its best before date.

Don't miss what's ahead on US Daytime this week by taking a look at Soaps.com's Soaps Spoiler Digest. And don't forget that we have all new All My Children recaps.

Elon Musk & Grimes Split After 3 Years Together: We ‘Still Love Each Other’ & Are ‘On Great Terms’